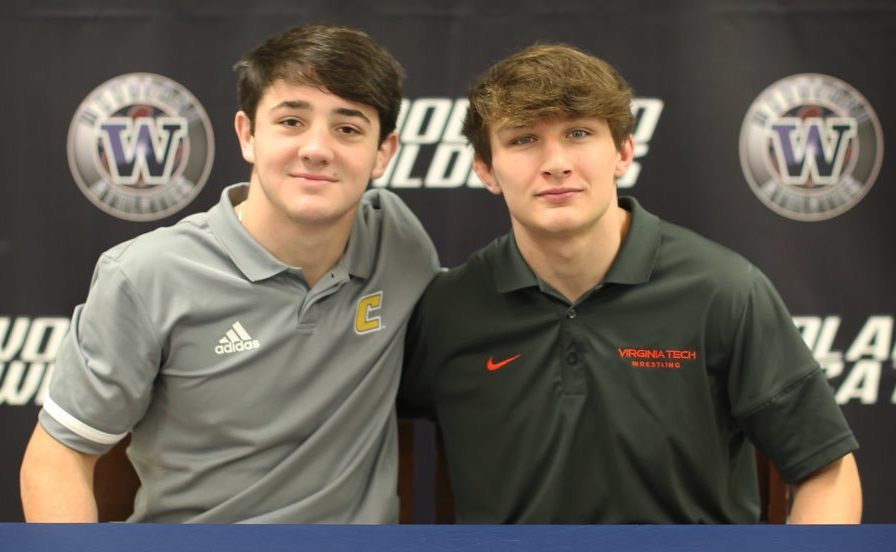 Y NICHOLAS SULLIVAN
The Woodland wrestling program is no stranger to seeing athletes sign to compete at the next level, and the Wildcats have sent plenty of alums to Division-I schools.

However, seniors Cole Cochran and Caleb Henson have a chance to do something none of the previous all-time greats managed. If the duo can help lead Woodland to duals and traditional state championships this season, the Wildcats’ Class of 2022 will have won both titles in each of their four years.

Along with their three duals and three traditional crowns, Cochran and Henson have combined for three individual state championships. Henson won as a sophomore, and both took home titles last season.

Due in part to that success, Cochran signed with Chattanooga and Henson inked with Virginia Tech during a ceremony Nov. 11 at WHS. Having gotten their future plans out of the way, the pair can turn their attention to completing the 2×4 and winning a couple more individual championships.

“It’s great that they both did it prior to the start of their senior year,” Wildcats head coach Adrian Tramutola said at the time of the signings. “I know sometimes it weighs on kids. … It’s all taken care of. They can turn their focus to their individual and team goals.”

And to be sure, they did. But for a few minutes, at least, Cochran and Henson got to reflect on how they reached this moment and what the future looks like for them beyond the borders of Woodland’s campus, Bartow County and even the state of Georgia.

“A lot of kids I’ve wrestled with my whole life are going there,” said Cochran, who is just barely crossing the state line to join the Mocs. “I already have a relationship with the team and the coaches. It’s just a cool town and not too far away from home. If you get homesick, you can get back pretty quick.

While Tramutola is a proud product of UTC and has now sent three of his Wildcats up there, he insists that he never tries to funnel his athletes to his alma mater. He firmly believes the school will be a great fit for Cochran and his tight-knit family.

“They’ve talked to a lot of our kids in the past,” Tramutola said of the Chattanooga program. “Obviously, I’m an alumni there. I’ve tried to kind of not put any of my personal stuff on them, because they’re the ones that are going to have to go to school there, live there and train there. You’re talking about a 4-5 year commitment, and a lot of people end up living in the city that they went to college.

“When they asked me my opinion, I was happy to give it. But I never wanted them to feel like I was trying to persuade them.”

Tramutola seemingly didn’t sway Henson to join ACC-member Virginia Tech, as Woodland’s first-ever national champion, a feat he achieved this past summer, certainly had his pick of schools.

“He knew it when he went there that it was the place for him,” Tramutola said. “I think that’s the best way to make the decision. You kind of get a feel for people. He thinks it’s a great fit, and I think it’s an awesome fit.

“They’re killing it right now. They just signed two other top kids, as well. They’ve got a really good recruiting class. I think he’s going to be a part of something extremely special that they’re building up there.”

Said Henson, “Everything there tops anywhere else, in my opinion. The coaching, the future that we have, the facilities, the partners that I have there, it’s really the whole nine [yards] for me.”

Then again, Henson would surely say the same thing about Woodland. Despite attending Cartersville Middle, he and Cochran, who went to Woodland Middle, have been friends well beyond the past three years.

“It’s just so cool to me,” Cochran said. “Caleb and I have been wrestling together since we were like 8 years old. To be able to [sign] with him is just awesome. It’s a lifelong drill partner. It’s just cool to have all of your hard work finally pay off and do what you’ve always dreamed of doing.”

Henson, likewise, reminisced about all of the times he spent with Cochran and other teammates training for the chance to wrestle in college.

“I feel like a little kid, because it’s kind of an early Christmas,” Henson said. “Set your goals, set them high and go achieve them. That’s all I did. It feels good to finally reach that peak. I’m not done yet. Still have more goals, chasing every day. This is just a step in the legacy.”

It’s a legacy that some would say was preordained. Many who have seen Henson throughout his career, which includes just one loss as a Wildcat, or saw Cochran’s older brother, Cody, win three individual state titles would argue that the pair were always destined for greatness.

Tramutola scoffs at that notion.

“I think sometimes it gets taken for granted,” the longtime head coach said. “You see kids like them, and you say, ‘Oh, they’re just good.’ Nobody is born a good wrestler. It doesn’t just happen. Nobody sees the work they put in or the sacrifices their families have made.

“It also says that they’re no different than any other kid. To some of our younger kids who might be inspired to be like them by the time they are seniors, it’s great to have them in the same room. … They’re two normal kids who have put a lot of work into the sport.”