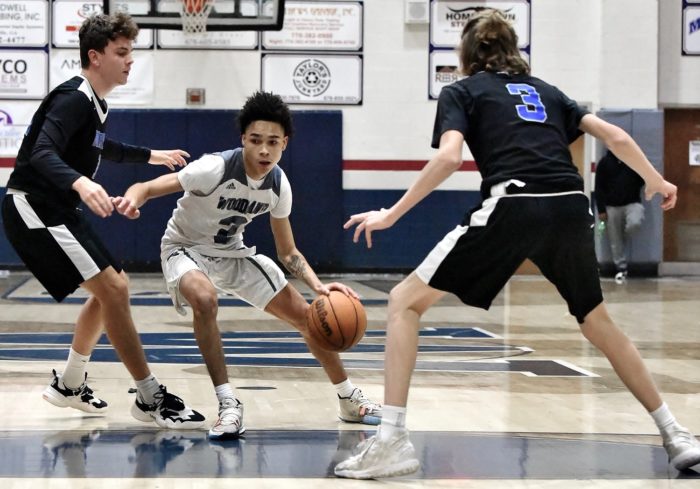 BY NICHOLAS SULLIVAN
Woodland opened its season with a nine-point road win at Gordon Central. When the Warriors made the return trip to Bartow County Tuesday, the Wildcats produced a much more complete performance.

Behind 35 points from Diaz Garrett and a swarming defensive effort, Woodland wound up with a comfortable 68-32 victory to improve to 2-0 on the year.

“We knew that this time we wanted to apply a lot more pressure,” Wildcats head coach Jacob Selman said in comparing the two games. “We definitely applied a lot more pressure. We played more of a half-court game against them the first game. We knew coming home that it was time to really turn it up and get a full-court game going.”

Garrett, who racked up 25 points in the first meeting, beautifully orchestrated that up-tempo style Tuesday.

Off a turnover or missed shot, the senior inevitably got the ball in his hands. He would either attack the rim or find a teammate streaking towards the basket.

Early on, Garrett and Co. struggled to convert the opportunities, leaving Woodland with a modest 7-4 lead entering the second period.

“If we could just maintain our defensive intensity, our defensive aggressiveness, we would be right there and be able to take over.”

That finally occurred in the second stanza, as the Wildcats held a 33-11 scoring edge, including a 16-1 run over the final few minutes.

Garrett matched Gordon Central’s output by himself in that quarter before outscoring the visitors in the second half.

He did so by catching fire from beyond the arc, drilling five 3-pointers. Three of them came early in the fourth quarter — which got trimmed to 6 minutes due to Woodland’s 57-26 advantage after three periods.

“He does a great job dispersing it throughout the game,” Selman said of Garrett, who recorded five assists. “He does a great job getting people the ball. He’s a great facilitator at times when we need him to be. He’s looking up the court and seeing guys running. That’s what we want to do a majority of the game.”

While it’s a bit unorthodox to open a basketball campaign with a home-and-home series, Selman believes the situation will pay off for the Wildcats — who received a 12-point, 12-rebound double-double from Brelace Williams.

Along with the added bonus of picking up a couple of confidence-boosting wins, the third-year head coach envisions the scenario helping out when Region 7-5A play, which includes two games versus each team, rolls around.

“I think adjustments are the name of the game,” Selman said. “We’re in 2021, where film is just an email away. … You know pretty much what the other team is going to do, who they are and who their best players are.

“It’s all in the adjustments before games in practice and then during game adjustments that make a difference.”