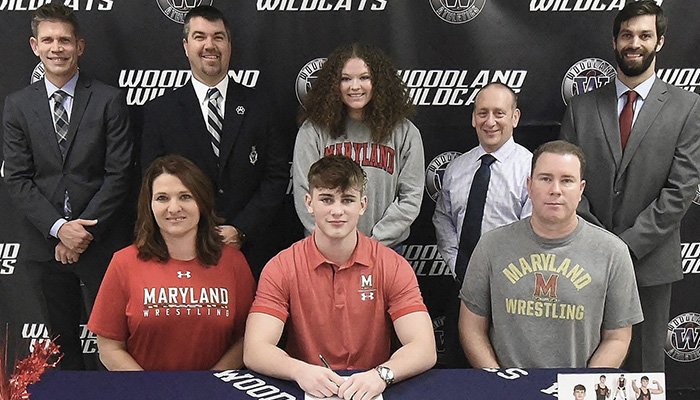 BY NICHOLAS SULLIVAN
Cartersville and Woodland have both dealt with COVID-19 outbreaks bad enough to cause the cancellation of football games in recent weeks. However, both schools were able to overcome those setbacks by the time the first National Signing Day of the 2020-21 school year rolled around.

Each school hosted a pair of signing ceremonies Wednesday, when a total of four Bartow County athletes decided to officially continue their careers at Division-I schools.

Wednesday morning, Woodland saw two of its top wrestlers ink with out-of-state universities. Caden McCrary followed through on his commitment to North Carolina, and Jaxon Smith signed with Maryland. In the afternoon, Cartersville’s Buck Brumlow joined the University of Georgia golf program, and Canes pitcher Micah Earwood pledged to continue his baseball career at Georgia State.

“It’s a little bit of relief off my shoulders that we’re finally able to sign and it’s official,” Smith said, unofficially speaking for the group. “Because of COVID, I wasn’t sure if we were going to be able to have an actual signing or not, but I’m glad we were able to do it now.”

Following their back-to-back ceremonies, McCrary reflected on the path the lifelong friends took to reach the stage of signing with major college programs.

“It’s been a long time coming,” he said. “We’ve grown up together, and we’ve trained together since I can remember. It’s awesome that, after all these years, we’re able to get it done.”

Across town, Brumlow felt a similar sentiment to his signing. Having committed to the Bulldogs at the beginning of his sophomore season, the son of two UGA graduates finally got to fulfill his destiny.

“It feels great,” Brumlow said. “It feels like I’ve been committed for five years now, but it’s only been two and a half. It feels good. I’m ready to get up there. I’m excited; I’m pumped.”

Even though Earwood has only been committed to the Panthers for a few months, the right-hander likewise enjoyed ironing out his future plans.

“It’s huge just having it set in stone now,” he said. “I’m excited about everything I’ll have going for me in college. I think the coaches and the culture there are going to be great. I think we have a chance to really make some runs there.”

While the signings took center stage Wednesday, the athletes quickly turned their attention back towards ending their senior seasons with state championships.

After missing his freshman season due to injury, Smith will seek his third individual state title to close out his career in February. That would match McCrary’s current total. Although, McCrary is certainly hoping to finish out his Woodland career with his fourth state championship, which would make him just the second wrestler in county history to achieve that feat.

As a team, the Wildcats will look to defend their Class 5A dual and traditional state championships this season. Woodland won both titles each of the past two years.

“It looks like Georgia is going to have a wrestling season this year,” Smith said, “so I’m excited to be able to wrestle under Woodland and be able to get my last state championship.”

While Smith and McCrary got to finish out their junior seasons just prior to the COVID-19 pandemic shutting down high school sports in the state, Brumlow and Earwood watched as their chances for state titles ended before they ever really began.

“It made us work a little harder,” said Brumlow, who didn’t play a single varsity match in 2019. “We’ll be back next spring, and we’ll be ready to get a ring.”

Brumlow narrowly missed out on an individual state title his freshman year. Brumlow actually led at the moment when play was halted on Day 2 of the Class 4A event, but after officials reverted to the Day 1 standings, he finished runner-up. Brumlow posted another top-five finish his sophomore year, as the Canes improved from eighth to fourth overall as a team.

Cartersville head coach Reggie Perkins believes the team’s improvement from 2018 to 2019 is due in large part to Brumlow’s influence.

“You could see as he started to grow his freshman year, he made sure his game was good and made sure that he was doing everything he needed to do,” Perkins said. “… He really missed his junior season, but even his sophomore season, you could see him develop more as a leader and be able to help others out.”

For what it’s worth, Earwood isn’t focused on what might have been. He’s a player who is extremely focused on the team and deferring focus away from himself, opting to have just his family and coaches at his signing.

So when asked about his goals for the upcoming season, Earwood answered directly.

“We want to win a state championship,” he said. “Anything short of that would be unacceptable.”

Earwood pitched for the Canes JV team his sophomore season, mostly due to the varsity boasting an incredibly experienced staff comprised of all future college players. Then again, he also greatly improved heading into his junior year, during which he became the team’s ace.

He only pitched a handful of times before the season got shut down but managed to put together some incredibly impressive performances, including a 5-1 win over Houston County at the Perfect Game High School Showdown in Hoover, Alabama.

“It’s amazing really, for us, he’s only started like four or five baseball games,” Cartersville head coach Kyle Tucker said. “He really got on people’s radar at Hoover. Once he was able to pick back up with his travel team, people really raved about him.

“I know it’s cliche, but sky’s the limit for him, literally. With his size, if he keeps adding muscle and keeps throwing harder, there’s no telling how good of a career he can have.”

Wednesday marked the first day Division-I and Division-II athletic scholarships could be signed in all collegiate sports besides football, meaning only those select few athletes who have excelled on and off the field would be able to celebrate their accomplishments this early in the recruiting cycle.

As Woodland wrestling coach Adrian Tramutola said, “It’s about them doing the right things the right way and being rewarded here at the end.”