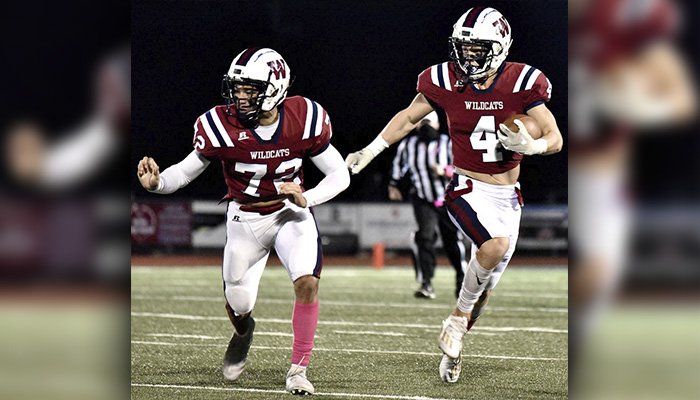 STAFF REPORT
One would think the Woodland High football team would be elated to beat Hiram at home Friday, 14-13, for the Wildcats’ first region win of the year.

However, because Woodland won by less than 12 points, the Wildcats will not win a possible three-way tiebreaker, and their playoff hopes are all but dashed despite a solid 4-3 overall record.

Woodland is now 1-3 in Region 7-AAAAA play, a half-game ahead of 1-4 Hiram and 1-4 Cass. But Woodland has the No. 2-ranked team in Class 5A up next week at Blessed Trinity. And because the tiebreaker for the fourth and final playoff spot in the region is margin of victory against the other teams involved in the tiebreaker, Cass and Woodland would come up short if Woodland doesn’t avoid the tiebreaker altogether by beating Blessed Trinity. Cass, for its part, is eliminated from postseason contention with no games left in its season.

As Friday’s wacky game neared its conclusion, it was clear Woodland was playing for the 12-point margin of victory more than just a regular old win. The Wildcats threw the ball down the field late in the game even though they had the lead with the clock winding down.

“I just felt like, at that point in time, it wouldn’t matter if we won by one or lost by whatever,” Woodland head coach Tony Plott said of managing the game late. “The kids, they knew, and we wanted to go for the 12. But, in the end, I think the kids were just glad we won.”

Even if fans weren’t fully aware of the convoluted tiebreaker scenario, the game was still plenty entertaining.

Hiram lost three fumbles near the Woodland goal line, and one of those fumbles led to Woodland’s Christiaan Vera going nearly the entire length of the field for a scoop and score touchdown in the third quarter.

Woodland also threw a pick-6 early in the fourth quarter, setting up a wild finish to the game.

After Hiram fumbled for the third and final time near the Woodland goal line and Jahsim Henry recovered for Woodland, Hiram forced a stopped and scored on a 42-yard touchdown pass from Chris Brown to Alvin Dixon III with about 2:30 remaining in the game. However, the extra point was no good and Woodland maintained a 14-13 lead.

Hiram then tried an onside kick, but it was unsuccessful. Woodland showed no signs of slowing down on offense, though, knowing it needed two scores to get the 12-point margin of victory. So the Wildcats tried a field goal with 59 seconds left in the game, hoping to make it, try an onside kick and score a touchdown with a 2-point conversion.

But the field goal missed, and then Hiram tried to go back down the field and try a field goal of its own to win the game. But the 42-yard attempt never even got off the ground as the clock ran out and Woodland escaped with the win, but without a playoff berth.

Neither team scored in the first half, but both teams moved the ball at times. Hiram had the best scoring chance of the half when, after Woodland snapped the ball over the head of its punter, the Hornets had the ball with a third-and-goal at the Woodland 2-yard line but put the ball on the ground. Eli Jernigan picked up the fumble for Woodland and the Wildcats avoided trailing early.

“Our defense played great for the most part,” Plott said of his unit, even though Hiram was without several of its top offensive players for undisclosed reasons. “I’m very proud of them. Offensively, we just did enough.”

Woodland was carried all game long by junior running back Asa James, and he had the first touchdown of the game in the third quarter when freshman quarterback Brelace Williams found him for a 72-yard pass play on Woodland’s first possession of the second half.

“He put us on his back tonight and carried us,” Plott said of James. “He’s done that all season. He’s a workhorse. He wants the ball on every play, and he’s a threat every time he touches it to take it to the house.

Chase Carson and Williams alternated at quarterback during the game.

“It was a series-type thing, more of a game-situation-type thing,” Plott said of alternating quarterbacks. “When we had to be under center, we feel more comfortable with Chase Carson being in there. But, when we go to the gun stuff, we feel comfortable with [Williams] in there. He knows that part of the offense well. And he’s going to be a good one. He shows improvement every single day, so we’re excited about what he’s going to be for us.”

In addition to the scoop and score by Vera, the sophomore defensive back also had a crucial interception around midfield late in the third quarter.

“We’re excited about what he can be for us,” Plott said of Vera. “We expect big things from him. He’s a really good athlete and he’s a ballplayer. So we’re proud he did what he did [Friday].”

Between the play of junior James, sophomore Vera and freshman Williams, Woodland has some positives to take away from the game for the future. And, even though the Wildcats likely won’t be headed to the postseason, Plott expects one last strong week of practice in hopes of staying competitive next week at Blessed Trinity, a program that won the last three state championships when the Titans were still in Class 4A.

“I think we just have to focus on finishing the right way,” Plott said of facing the Titans. “I think a lot of our guys want to play at the collegiate level. This is our chance for them to go up against a lot of guys who are going to play at the collegiate level, and they can kind of get a measure of where they’re at. So we have a lot to play for. Pride is a big one.”