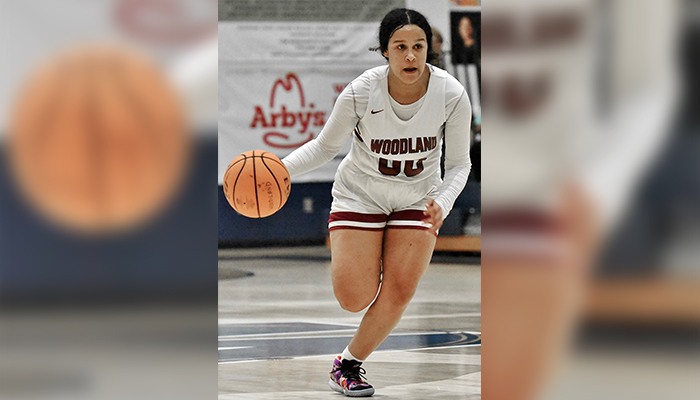 With scores at the end of the first three quarters of 6-0, 13-6 and 21-13, the Woodland-Adairsville girls basketball game had the feel of a tightly contested gridiron matchup.

The fourth quarter finally saw both teams put up double-digit points in the Wildcats’ 37-25 win Tuesday at home.

Tuesday’s game wound up being much different than the teams’ first meeting this season Nov. 23 at Armuchee. Adairsville won that back-and-forth game 51-49, as the teams combined for an even 100 points.

Woodland head coach Kyle Morgan appreciated the defensive play by his team that allowed the Wildcats (1-5) to hold the Tigers (2-3) to less than half as many points this time around.

“We had the lead at Armuchee and didn’t finish well,” Morgan said. “It’s good to see us finish better down the stretch. Total team effort. Proud of the kids.

“We’ve faced some adversity already early in the year. I’m proud they were able to see the benefits of their efforts.”

It took Adairsville until the second quarter to find the bottom of the net. Ironically, Haley Stiles scored the team’s first basket at 6:20 p.m. and with 6:20 remaining on the game clock. Even more bizarrely, Stiles’ bucket made the score 6-2.

“We have to be ready to shoot the ball,” Tigers head coach Melissa Winters said. “We had girls passing up shots that they shouldn’t have passed up. They’ve got to shoot the basketball.”

While Woodland never trailed, Adairsville did manage to pull within 15-12 midway through the third quarter after Lexie Childers scored six of her team-high nine points in a 6-2 run.

Ansley Evans never gave the Tigers a chance to tie the game, as the Wildcats senior buried a 3-pointer on the next possession for a six-point lead. Jordan Thompson followed with a traditional 3-point play.

Armed with an eight-point lead to begin the final stanza, Woodland continued to racks up 3s to maintain its advantage. Thompson made a pair of shots from deep in the fourth quarter, as did freshman Reagan Weightman.

“Those all came off the pass,” Morgan said of the shots from beyond the arc. “We actually moved the ball from side to side and found the open player. … That’s kind of what we’re shooting for is for everybody to share the ball and be patient.”

Thompson finished with 18 points to lead the Wildcats. The senior knocked down 8 of her 9 free-throw attempts, while serving as Woodland’s primary point guard.

“We put a lot on her plate,” Morgan said of Thompson. “She handled the pressure pretty well and found her open teammates. She was able to make some free throws down the stretch and scored when she had the opportunity. … She’s a really talented player.”

Despite the loss, Winters noted how much better her team played during the final period. The first-year head coach will hope to have Adairsville bring that same sense of urgency out of the gate this weekend, when its travels to Sonoraville (Friday) and Rockmart (Saturday) in Region 6-AAA play.

“We’ve got some growing to do,” Winters said. “They showed me right at the end that they can execute some end-of-the-game strategies. That’s a positive going into region play.”

Meanwhile, Morgan will look for another strong performance against Pepperell Friday at home before returning next week to Armuchee to compete in the 67th annual Rome holiday tournament.

Morgan wouldn’t complain if his team scored a few more points in those upcoming games, but he certainly can live with a low-scoring game if it goes Woodland’s way.

“They worked hard; they’ve earned it,” Morgan said of his players. “They continue to work for one another. When they are playing together, as a unit, they do some pretty nice things.”