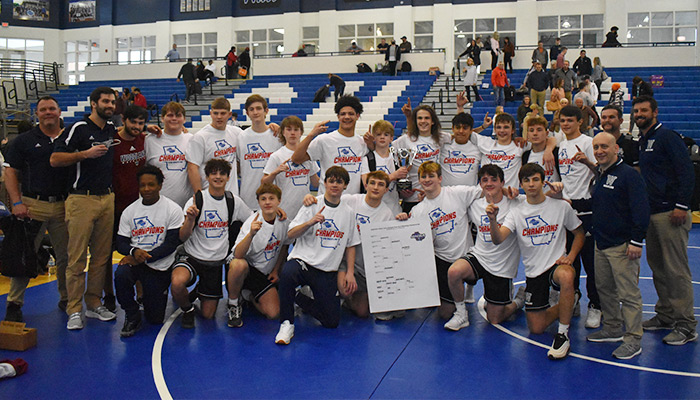 BY NICHOLAS SULLIVAN
When Woodland’s Caleb Henson pinned his Cass opponent 15 seconds into their 152-pound matchup Friday at Locust Grove High, there was a muted celebration.

It didn’t matter that Henson had just secured the Wildcats the Class 5A duals state championship. The result was so expected that Woodland didn’t feel the need to act like it hadn’t been here before, because clearly it had.

Minutes later after Cole Cochran won his match at 160 by technical fall, the Wildcats finally showed some emotion in winning their third consecutive duals title and fifth overall championship in the past three seasons.

“It means a lot, especially doing it for this program,” senior Jaxon Smith said. “We’re around all these people who are my best friends and my mentors as coaches, so it definitely means a lot. I’m extremely thankful for it.”

Although the 47-24 final score marked an improvement for the Colonels over the region finals matchup from two weeks prior, the Wildcats won four pivotal swing matches that allowed them to continue their unprecedented run of success.

“The rivalry, it builds,” Woodland head coach Adrian Tramutola said. “… They’ve got a bunch of guys coming back, so we’re going to have to go back and get after it too. It works the other way, as well. They want to beat us. I know they do. It’s been a while. But we want to beat them too.”

Cass, which edged second-seeded Woodward Academy in the semifinals, will certainly present a stiff test for Woodland in the upcoming state traditional competition at Macon. However, the Colonels are also no doubt looking ahead to being able to knock off the Wildcats in next year’s duals event.

“They wrestled for each other, that’s for sure,” Cass head coach D.L. Koontz said, noting his team’s improvement compared to the region meeting with Woodland. “… The good news is that we return every one of them but four, so we’re still a young team. This duals part of the season is over with, so we’ll try to get ready for traditional, try to finish as high as we can and make another run at a title there.”

Having cruised through the first two rounds, dispatching Walnut Grove and Ola, Woodland came out strong in the finals.

Brandon Montes secured five points with a technical fall in the opening match at 170 pounds. Jeremiah Rhoades followed with a 9-4 win at 182, and Smith, a University of Maryland signee ranked ninth in the country, pinned his foe at 195 to put the Wildcats up 14-0.

Cass senior Noah Hoffmeier quickly pinned at 220 to get the Colonels on the board.

Woodland responded with two pivotal victories. Beau Jernigan pinned in the heavyweight division at a point when he trailed 4-3 on the scoreboard, and Hayden Santora broke a 1-1 tie in the closing seconds at 106.

“We don’t fear anyone,” Henson said of his teammates stepping up. “… If you’re in front of us, we’re going to go through you.”

The Colonels reeled off a trio of wins by Jake Crapps, Cole Hunt and Bryce Kresho (each via fall) to storm back to grab a 24-23 lead.

Cass appeared set to earn a fourth straight win, but Randy Buchanan, from his back, flipped his opponent into a match-changing pin. Colton Bishop followed with a huge 10-9 win, thanks to an escape in the final moments.

“There was no secret that there were four or so matches there that were going to determine the dual,” Tramutola said. “We felt like there were certain spots that we were not going to lose. I know that’s terrible to say as a coach, but the samples show we’re pretty favored. If we could come away with a couple of those matches, which we felt good about doing, we would win the dual.”

Three-time individual state champion Caden McCrary put Woodland on the brink with his 13-5 triumph at 145 pounds. The seventh-ranked wrestler in the nation at his normal 138-pound weight class, McCrary understood just how incredible the team’s journey was in a season (and offseason) full of uncertainty surrounding the COVID-19 pandemic.

“This season was different, man,” said McCrary, who has signed with the University of North Carolina. “We’ve always faced adversity. Nothing like this year. There’s a lot of things different, but we all knew we were the best team in the state. As long as we stayed healthy and stayed on the mat, we didn’t think anybody could stop us.”

With the No. 3-ranked wrestler at 152 in Henson following McCrary, the Wildcats knew they would win the championship. That certainty stood in stark contrast to how Tramutola felt in the lead up to this school year.

He gave credit to superintendent Phillip Page, principal David Stephenson and athletic director John Howard for helping Woodland have a season at all. Tramutola’s team made sure their work wasn’t for naught.

“If I had to be honest with you, I didn’t know if we would get here,” Tramutola admitted. “I doubted seriously that we would get here. … We’ve said that it may not be the best team that wins it. It will be the team that navigates all the crazy stuff.

“We’ve stayed intact; we’ve stayed together. We’re wrestling at Locust Grove High School, but we’re state champs for the third time in a row. That’s hard to do.”