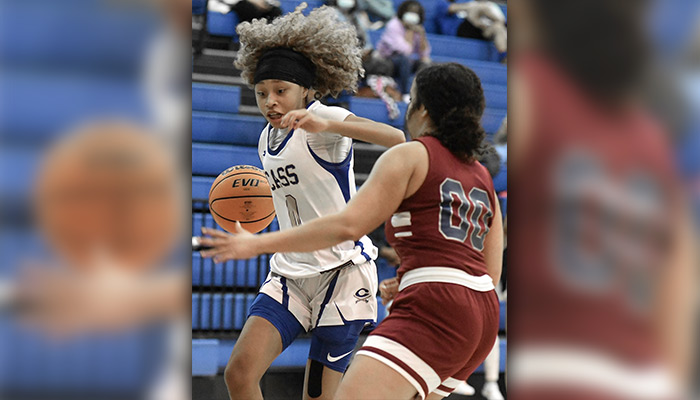 BY NICHOLAS SULLIVAN
In a lot of ways, the Woodland girls played well against the fourth-ranked team in Class 5A. But the Cass girls are undefeated for a reason.

Even when the Colonels don’t appear to be on their A game, Cass’ B and even C games are usually more than satisfactory. That seemed to be the case in a 75-46 win over Woodland in Region 7-AAAAA action Tuesday at home.

“Woodland, I thought, played pretty well tonight,” Cass head coach Burt Jackson said. “They shot the ball pretty well. They were ready for our half-court trap. Sure, we caused a few turnovers, but they moved ball well and got a couple of really nice looks off of it.”

“To Woodland’s credit, they were playing hard,” Jackson said. “I think we settled in. I’m noticing whenever we play anybody from within the county, the first few minutes are always tight. They know each other, and then they kind of settle in.

“Haley [Johnson] hit a big deep 3, and it kind of got things rolling.”

In between the key runs, the Wildcats actually played the Colonels pretty evenly. In fact, a 10-0 burst during the third quarter saw Cass’ lead dip to 17 points — the closest the game had been since the opening period.

“I was proud with our response out of the half,” Woodland head coach Kyle Morgan said. “We did a little bit better job of taking care of the ball, which allowed us to shoot the ball and score the ball. In addition, we were able to get some turnovers.

“Obviously, they are as good as advertised. When we made any mistakes or took bad shots, they punished us.”

That’s what helped the Colonels gain control late in the first quarter.

After Johnson got going early, Claire Davis began converting on transition buckets to extend the lead. By the end of the opening stanza, the juniors had combined for 20 points.

Davis finished with 20 points — 16 in the first half. Johnson added 15 points, with 13 coming before the interval.

Londaisha Smith and Keara McDaniel took over in the second half. Each scored nine of their 11 points over the final two periods.

“When you have that much balance, there’s not a whole lot you can do defensively,” Jackson said, referencing his four players in double-figures. “You can’t just key in on one player.”

Woodland received a team-high 11 points from Jordan Thompson. The senior had eight points during the third quarter, when the Wildcats held a slight 20-18 scoring edge.

Speaking of road games at Cartersville, Cass will make the short trip Friday to The Storm Center. After that rivalry game is a trip next Tuesday to Hiram, Jackson knows a win there would all but lock up the region’s top spot.

Coming off a somewhat sluggish performance — which Jackson noted came three months to the day since the Colonels’ first practice — he doesn’t believe his players will have any trouble rising to the occasion in their next two games.

“We know all our plays, all our defense and all our presses,” Jackson said. “We know what the other teams do, at this point in the season. Now, it’s just trying to find that balance of staying sharp but resting. …

“The good news is that the next two games, it shouldn’t take much to get the girls up.”