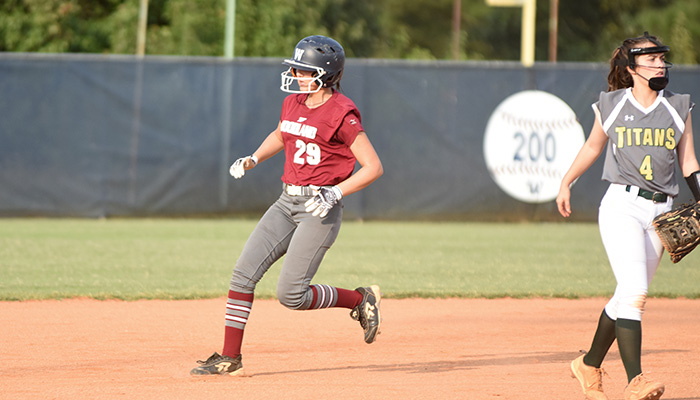 The Atlanta Braves could have used the clutch hitting of Michiah Hicks and Dylynn Motes or the masterful pitching of Lainey Baker Tuesday in Los Angeles.

Alas, the trio of Woodland softball stars couldn’t make the trip to California for the National League Championship Series. If it’s any consolation, the triumvirate instead used their talents Tuesday to help send the Wildcats to the Class 5A double-elimination state tournament.

Victories of 7-4 and 18-6 over Wayne County secured the program’s second-ever trip to Columbus for the eight-team tourney, with the first coming in 2004.

Woodland actually advanced to the Elite Eight last year, but due to COVID-19, the GHSA shrunk the state tournament to four teams, as the Wildcats fell to eventual champion Jones County in the quarterfinals.

“I’m just glad the seniors got to do it,” Woodland first-year head coach Matt Montgomery said of the achievement. “They really should have gone last year. It was just the way it was. I’m glad they’re getting to experience it, because they haven’t.”

Following a first-round upset by No. 4 seed Wayne County, Woodland — the third seed out of Region 7-5A, which also saw Blessed Trinity and Calhoun qualify for Columbus — took advantage of being at home, racking up 28 total hits and committing just one error.

In the fourth inning of Game 1, Wayne County racked up four runs against Baker to take a 4-2 lead. Woodland answered right back with a four-spot of its own.

During the nightcap, the Jackets battled back to even the score at 6-all in the fourth. The Wildcats immediately regained the advantage in the fifth before erupting for nine runs in the top of the seventh to completely put the game away.

“I told the girls right there at the end, ‘The reason you’re here is that every time they scored, you answered,'” Montgomery said. “… It just speaks to the resiliency of these girls. No matter what happens, they’re never out of it. They’re always fighting.

“It’s fun to sit back and watch them play. We’re nervous sitting over there; they’re not. They’re just out there playing. You can tell the confidence from all of the close games and competition that we’ve had all year. You can see it paid off right there. That’s why you do it.”

Woodland took advantage of two errors in the home half of the third to take a 2-0 lead in Game 1. Following Wayne County’s outburst, which included four of the Jackets’ five hits in the opener, the hosts came through with a two-out rally.

Seniors Hicks and Motes, who both had monster days at the plate, came through in the clutch. The former lined an RBI single before the latter drilled a three-run double for a 6-4 lead.

Baker drove in an insurance run with a two-out single in the sixth. That was more than enough cushion for the right-hander to close out the victory.

A senior, Baker struck out 16 of the 26 batters she faced, including the first eight, in the complete-game effort. Baker walked just one.

Perhaps most impressively, she didn’t allow a single Wayne County batter to reach in their first or third at-bat, showcasing an ability to counter the adjustments the Jackets made the second time through the order.

To top it all off, Baker picked up the save in Game 2.

After Peyton Dorn overcame some tough luck and exited with a 9-6 lead, the two-time Daily Tribune News Pitcher of the Year entered in the bottom of the sixth. Baker gave up a leadoff single, and then promptly struck out the final six batters she faced.

“A gutsy performance coming back and closing that last one,” Montgomery said of Baker. “She wanted to. She was asking, ‘Can I pitch this one?’ When you’ve got somebody like that … you give her the ball and let her go.”

Offensively, Woodland opened the second game with a bang. The Wildcats recorded back-to-back-to-back singles — the last of which drove in a run off the bat of Hicks — ahead of a three-run homer by Motes.

The Jackets pulled within 4-3 in the third, but Hicks doubled home a pair in the fourth to extend the lead again. Undeterred, Wayne County posted four straight two-out hits to knot the score in the home half of the frame.

With the bases loaded in the fifth, Jordan Hammonds lined a two-run single up the middle, giving Woodland the lead for good. Cassie Jones followed with a sacrifice fly for a 9-6 edge.

“When you answer, it makes the pitcher feel better and takes a little pressure off of them,” Montgomery said. “… You feel like you don’t have to be so fine.”

After Baker struck out the side in the sixth, the Jackets started to hang their heads, and the Wildcats pounced. Seven hits, three walks and a hit batsman allowed Woodland to double its run total in one long turn at bat.

Overall, Hicks finished 5-for-6 in the game and 6-for-9 on the day. The 2020 DTN Player of the Year scored three times and drove in a whopping nine runs, including seven in Game 2. Motes wound up 3-for-8 with a walk, two runs scored and seven RBIs.

“All of the seniors, I think every one of them played amazing,” Montgomery said.

While Woodland will certainly face a tough test in its Columbus opener against Starr’s Mill (16-6) — which came in runner-up to Jones County last year — the Wildcats should enter the tourney with plenty of confidence.

This type of accomplishment looked to be a pipe dream roughly two weeks into the season. However, Woodland persevered, and the Wildcats (sorry, Braves fans) are reaping the rewards.

“It’s been a lot of fun watching these girls grow together as a team, mature and learn how to compete,” Montgomery said. “We started out 1-7-1, and none of us were feeling too good at that point about what was going on. …

“They knew all of the tools were there to be successful. They put their heads down and kept working. We got some momentum, scratched some out and we’re one of eight teams still playing.”