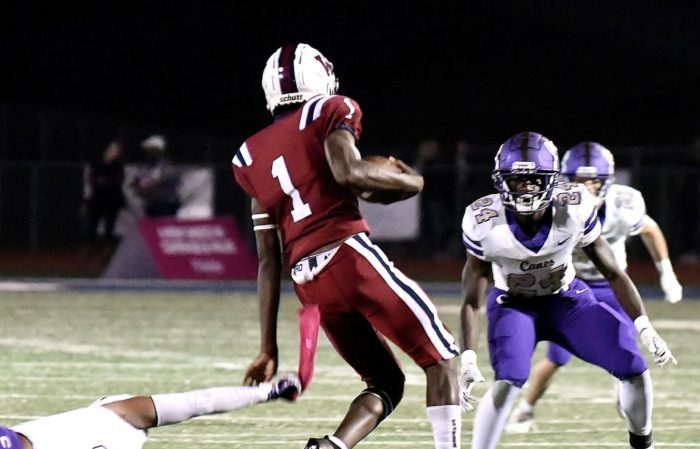 Even with a loss Friday night, the Cartersville football team would have been able to win the Region 7-5A championship.

It was unlikely that the Canes, the new No. 1-ranked team in Class 5A, would fall in their rivalry matchup with Woodland Friday at Wildcat Stadium. But the ingredients were there for at least a slow start.

Needless to say, Cartersville proved to be extremely focused on the task at hand. The Canes scored on their first play from scrimmage en route to a 35-0 lead after one quarter and an eventual 49-7 victory over the neighboring Wildcats.

After an offsides call to begin the game, Canes quarterback Jake Parker hit a wide-open Jacob Ray who went untouched on a 64-yard touchdown. Parker also connected on scoring passes to Nasir Grandberry (5 yards) and Brynen Wilkins (9 yards) in the first quarter.

Parker played just the opening period, and the senior wound up 7-for-10 passing for 111 yards and the trio of scores.

After Ray’s touchdown, Amari White found the end zone for Cartersville (8-0, 4-0) from 5 yards out. A fumble on the ensuing offensive snap by the Wildcats gave the Canes a short field, and Khristian Lando capped the series with a 7-yard score.

“They were efficient,” Foster said of the offensive performance. “They played fast. We threw some different looks at them and executed well.”

On the first, Gamble hooked up with Kendric Price on a short pass, and the sophomore wide receiver did the rest on a 56-yard touchdown. Dorian Randle capped the other, scoring a 12-yard rushing touchdown for a 49-0 halftime lead.

“Hats off to coach Foster and his coaching staff.” Wildcats head coach Tony Plott said. “Cartersville is as good as everybody says and as good as their ranking is right now.”

Woodland (1-8, 0-4) nearly ended the shutout in the first few seconds of the second half, when Chase Carson returned the opening kickoff into the end zone. However, a penalty wiped out the potential score.

Instead, it took the Wildcats until the final minute of the game to put points on the scoreboard. Brandon Montes finished off an 11-play, 80-yard drive with a 2-yard plunge across the goal line with 45 seconds to go.

“We still have a long way to go. What we have been trying to hammer home to them lately is the dedication to the weight room and the dedication during the summer, doing what we’re supposed to do to get better.”

Woodland will close out the season next week at Hiram. The Wildcats will likely do so without running back Asa James, who sat out Friday’s loss with an injury.

“Without a player like him in the lineup,” Plott said, “it makes it a little bit harder for us.”

Unfortunately an injury that occurred during Friday’s contest left those on both sides of the rivalry heartbroken.

Early in the second quarter, Cartersville defensive lineman Delroy Hurst suffered a broken leg. The sophomore had to be stretchered off the field. Seemingly every one of his teammates came over to offer words of encouragement as Hurst was wheeled towards an ambulance parked near the Woodland field house.

“My heart is heavy for him,” Foster said of Hurst. “He’s such a good boy, such a hard worker. Just an awesome family. You just see how much our kids love each other. I appreciate Woodland for handling it the right way. It’s just really unfortunate. Our prayers, our hearts are with him and his family.

The Canes’ next chance to do that will come in a pivotal top-10 showdown next Friday at Weinman Stadium.

The winner of the Cartersville-Calhoun matchup will claim the region crown and the league’s No. 1 seed for the upcoming Class 5A state tournament. The loser will still be the second seed, and although they would host in the opening round of the playoffs, it’s likely that team would hit the road in the Sweet 16.

“It’s a blessing,” Foster said of being able to play in such a game. “The season is a grind. So many things have to go your way to be in this position.

“I’m really thankful for all of these seniors and the leadership they’ve provided. I’m just excited to see how we’re going to respond to another big challenge.”