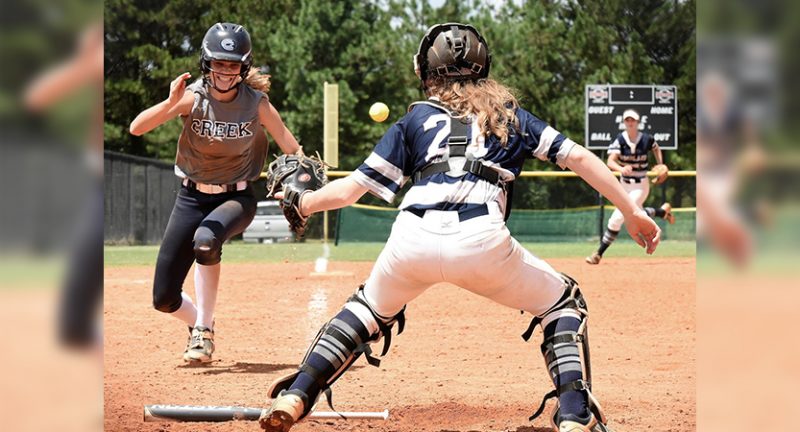 Having defeated powerhouse Gordon Lee Friday night, the Wildcats remained unbeaten in the tourney and on the season with a 5-1 win over the Yellow Jackets Saturday morning. But a 5-2 defeat against the Colts in the afternoon saw the weekend finish on a sour note.

Woodland (2-1) jumped out quickly against Sprayberry, loading the bases with no outs in the first on a single and two walks. Lainey Baker drove in the first run on a groundout to score Michiah Hicks. A two-run double by Dylynn Motes pushed the advantage to 3-0.

The Wildcats tacked on a run in the home half of the second. After again filling up the bases with two walks and a hit, Hannah Miller’s groundball brought home Jessica Ryan.

With Baker mowing down the Sprayberry lineup, Woodland pushed across an insurance run in the bottom of the sixth. It was yet another run-scoring grounder — this one off the bat of Cambrie Carrington to score Motes — that made the score 5-0.

Sprayberry finally managed an unearned run against Baker in the seventh. Overall, the junior allowed just two hits and three walks against six strikeouts in a complete game.

Without Baker in the circle, the Wildcats were unable to overcome the Colts, who pounded out 11 hits in just five innings. Even still, a few defensive mistakes loomed large, as Coahulla Creek scored all five of their runs — each unearned — in the third inning off Cassie Jones.

Woodland also didn’t help its cause much at the plate, recording just two hits — one each by Ryan and Morgan Cooper. It took until the fifth inning for the Wildcats to rally. They pushed across two runs with Cooper driving in Ryan to bring the tying run to the plate.

However, Coahulla Creek escaped the inning, which proved to be the game’s last due to the time limit.

A huge doubleheader at home against Cass to open Region 7-AAAAA play is up next for Woodland.