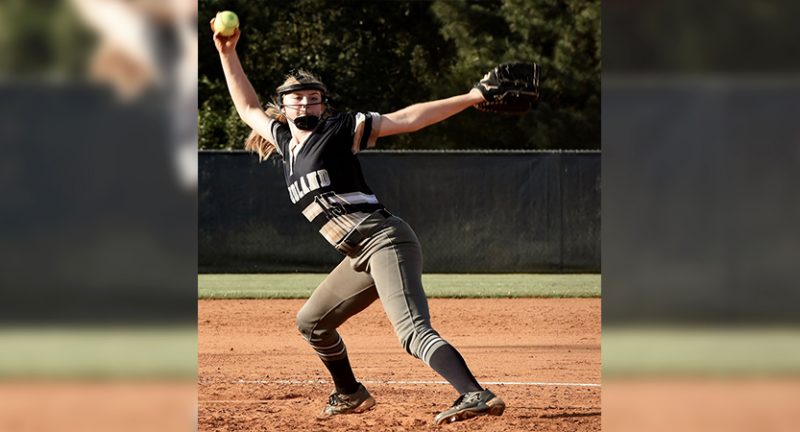 BY NICHOLAS SULLIVAN
Woodland junior Lainey Baker was two outs from leading the Wildcats to a pair of victories Tuesday against rival Cass in a home doubleheader. But a late rally from the Colonels earned the visitors a split in the opening Region 7-AAAAA games for both teams.

Following a complete-game shutout by Baker in a 6-0 win to open the day, the Wildcats carried a 5-4 lead into the seventh inning of Game 2. The Colonels, though, got a leadoff single by Kylee Hembree and a one-out double by Haylee Dishmon that forced Woodland to intentionally walk Alexis Woods, The Daily Tribune News Player of the Year from 2019.

The Wildcats (3-2, 1-1) wanted a force at the plate, and their plan worked almost perfectly, as Eryn Lee hit a grounder in front of home plate. However, Baker’s barehanded scoop to the catcher — her sister, Kailey — went off her glove and allowed two runs to score. A sacrifice fly by Ansley Hight scored Woods for an insurance run, and Hembree finished off a complete game in the home half for a 7-5 win.

“I think our offense has done so well so far, our mindset is that we’re never out of it,” Cass head coach Taylor Washington said. “I think that mindset helped us today.”

Washington also praised the mindset of Hembree. She walked four and didn’t record a strikeout but managed to do just enough to escape without allowing a big inning. Five of the hits Hembree allowed were solo home runs — one each by Michiah Hicks, Hannah Miller and Lainey Baker.

“Her mindset was great,” Washington said of Hembree. “… She didn’t let it bother her when they hit the home runs. She just knew her defense had her back. All she needed to do was throw strikes, and we were going to score some runs behind her.”

It helped that the Colonels (5-2, 1-1) played phenomenal defense on the night. Woods made a pair of stellar catches from her shortstop position; Hight tracked down every catchable ball in center field; and Lee made a leaping grab to end the game on a liner by Miller.

“I’ve been harping to my pitchers to let the defense play and trust them,” Washington said. “That just instills that in them even more if they’re willing to lay out and get balls that if they didn’t would be hits. I think the pitchers trust them that much more because of that.”

Lee led the Cass offense in the victory, finishing 2-for-4 with two runs scored and four RBIs. Woods went 2-for-3 with a walk and three runs scored. Hicks paced woodland with two hits, including her deep drive beyond the right-field fence.

The Colonels jumped out with two runs in the top of the first, but the Wildcats matched them in the bottom of the frame. Each team scored a single run in the third inning before Woodland inched ahead 4-3. Cass tied the score only to see the hosts take a 5-4 lead on Baker’s blast, but the Colonels made their final turn at bat count to earn the split.

Baker gave up four earned runs on seven hits and two walks in the defeat. She struck out seven. In the opener, the right-hander allowed only two hits with a dozen strikeouts and no walks.

Roberts admitted his initial plan wasn’t to throw his ace all 14 innings, but after needing just 76 pitches to get through Game 1, she convinced him to let her start the second contest.

“I was proud of her,” Roberts said of Baker. “… I told her I was thinking about bringing her in about the third or fourth inning [of Game 2]. She said, ‘I’m good now.’ I asked her after a couple innings, and she said, ‘I’m fine.’ I think she got a little tired, but I’m pleased with that. Get a little stamina; get her legs up under her.”

Along with her homer in the nightcap, Baker also had a key two-run double in the first inning of the opener. The key hit made it 3-0, as the Wildcats plated four in the opening frame. Baker didn’t need any more support, but Woodland did tack on single runs in the fifth and sixth innings against former Wildcat Madi Bentley.

“I don’t know what she did between last year and when they came back in June, but she can hit it,” Roberts said of Baker, who didn’t hit for herself last season. “Usually I’ll DP for the pitcher, especially if it’s hot. But I can’t not have her in the batting order.”

Hicks had another great game at the plate in the opener. The left-handed hitter went 2-for-2 with two walks and a run scored. Seniors Ansley Evans and Morgan Cooper each finished 2-for-4 in the win. Evans scored one run and drove in another, while Cooper scored twice.

The split means both Bartow County programs occupy the middle of the standings after Calhoun and Blessed Trinity swept Cartersville and Hiram, respectively, in their own doubleheaders Tuesday. Each side will feel as though they could have earned the sweep, but Woodland certainly had the best chance at doing so.

“It’s early in the season,” Roberts said. “We always play better towards the end of the season. I told them, ‘We’re not going to panic.’ I thought we hit the ball good today. We hit a lot right at them. Way too many flyballs.”

Meanwhile, Cass will fancy its chances of taking the head-to-head tiebreaker when the teams meet Sept. 3 for the final game of the series. Although the Colonels know they will probably see a fresh Baker that day, they should bring plenty of confidence into the future meeting.

“I knew Woodland was a great team, and I thought we could take two,” Washington said. “But I told the girls, ‘Taking one against this team is huge.’ They’re well coached and going to do really well in this region, so taking one is really big.”