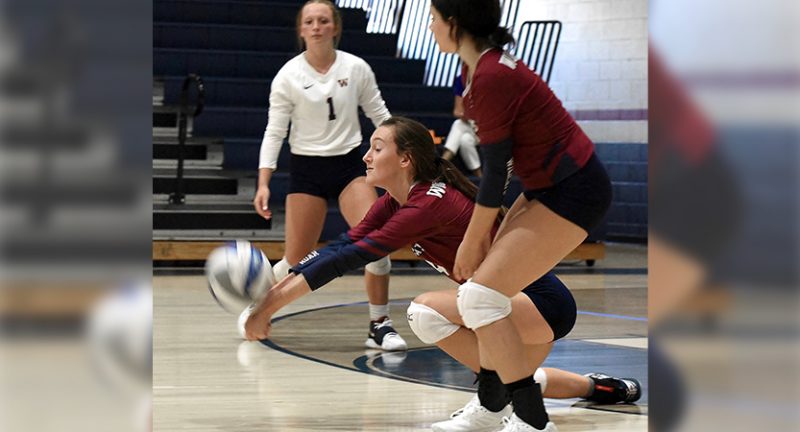 BY NICHOLAS SULLIVAN
After a disappointing match Wednesday at Cherokee, the Woodland volleyball team opened its 2020 home slate with a truly competitive tri-match that saw the Wildcats, Model and Cedartown each finish 1-1.

Woodland opened the night with a three-set victory over Model by scores of 25-19, 23-25 and 15-13. The Blue Devils, though, bounced back, rallying from a set down to defeat Cedartown. Perhaps fueled from their defeat, the Bulldogs edged the Wildcats in the first set before cruising in the second for the 25-23, 25-12 sweep.

While Woodland head coach David Condon would have certainly hoped to see his team pull out the final match of the evening, he couldn’t complain about the level of competition on the night.

“We didn’t know what to expect from Cedartown and Model,” he said, “but we are typically really close head-to-head any time we play them. … It was nice for us to be competitive for four out of five sets. That was great. We just have to make sure we dig in and keep being competitive.

“We beat Model; Model beat Cedartown; and Cedartown beat us. That shows you how evenly matched it is. You just have to have the mental resolve to keep on pushing hard. When your body gets tired, you have to find a way to keep the focus, so that you can execute down the stretch. We didn’t do that. They did, and there’s the difference.”

While things ended on a sour note, Woodland (1-2) did show a good bit of mental fortitude against Model.

In the opening set, the Wildcats recovered from some early issues to tie the match at 15-all. They trailed as late as 18-17 but used an 8-1 run to close it out.

The Blue Devils seemed determined to avoid the sweep, rolling out to a 17-10 lead in the second set. A late rally from Woodland came up just short, as Model hung on to force a decisive third set.

Both teams traded points through the opening exchanges of the final set. Woodland managed to gain a 13-8 advantage only to see Model pull off a 5-0 run to even the score. A pair of points, including a fortunate kill by Kailynn Mullinax on set point, allowed the Wildcats to escape.

“We got off to a slow start and weren’t executing well,” Condon said of the Model match. “About halfway through the first set, the girls started to execute better. We kind of gave away the second set. That was disappointing, because it was close and we had that in hand. … But we bounced back and took the third, so that was nice.”

Coming off a win and seeing Cedartown fall to Model, Woodland had to feel pretty good about itself entering Thursday’s final match. And it showed early, with the Wildcats jumping out to a 10-3 lead.

However, the Bulldogs quickly began chipping away, rallying to tie the match at 12-apiece within minutes. The teams traded the lead until Woodland started to pull away with a 22-18 edge, only to see Cedartown storm back to steal the set.

Despite the heartbreaking finish, the Wildcats reeled off the first three points of the second set. It was all Bulldogs from there, though, as they scored 25 of the next 34 points to salvage a split of the night.

“You have to give credit to Cedartown,” Condon said, admitting that the Bulldogs beat his team at its own game. “They did a really good job of not giving up on any rallies. They knew if they kept on returning, we would eventually make mistakes. You’ve got to give credit to that, because that’s what we try to do. … They did a better job of it than we did.”

Needless to say, Condon felt as though Thursday went much better than Wednesday, when his team suffered a sound defeat to Cherokee in a best-of-five match.

The long-serving head coach believes his players have yet to build up their stamina through the early stages of the season, which included an extremely atypical ramp-up period. He also contended that a necessary formation change forced some of his players out of position.

All in all, Thursday seemed to be a step in the right direction for Woodland.

“We found out last minute today that we were going to have to change it,” Condon said of the formation. “When we found out, we just threw together what we have. I was very pleased with that with how we executed, for the most part, given that.

“We’ll come back in Monday and adjust our rotation. There’ll be a little less confusion and a little better job covering certain spots whenever we have long rallies. I think that will make a difference.”