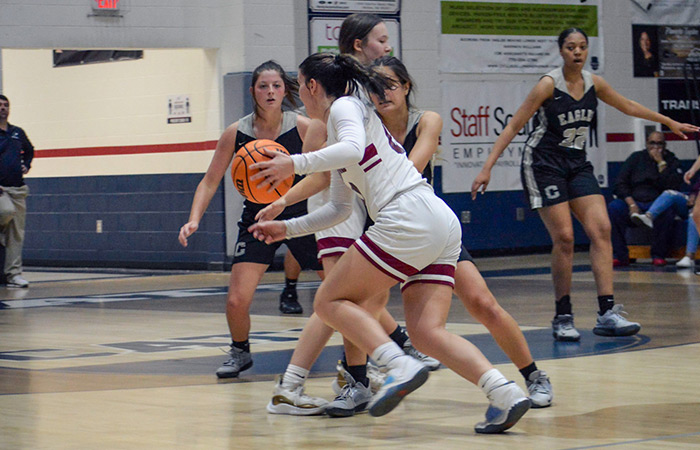 Despite a scoring drought that lasted more than three-fourths of the second half, the Woodland girls basketball team managed to eke out its first win Tuesday at home.

After taking a 17-6 lead into halftime against visiting Temple, the Wildcats went scoreless through the entire third quarter and half of the fourth. Ultimately, Woodland needed a pair of clutch free throws by Abigail Taylor in the waning moments to secure a 23-21 victory.

“We’re very thankful to get the win,” Wildcats head coach Kyle Morgan said. “Definitely wasn’t very pretty. … There was a moment where it seemed like we didn’t score forever. We left a lot of baskets out there that I would like to think we would make if we had the opportunity to shoot them again.

“Really proud of them for being able to stay together and weather the storm. It allowed us to make a couple of plays down the stretch that allowed us to score a couple more points than the other team and earn our first win.”

Woodland (1-6) held a slim 6-4 lead after one quarter before dominating the second period. Temple scored all six of the game’s third-quarter points to get within 17-12 entering the final stanza.

“This group, they get after it,” Morgan said of his team’s defensive effort. “Once they learn to score a little bit more and make some better decisions with the ball, they’ll be a tough out.”

Freshman Jakya Garnigan ended the scoring drought by stealing the ball near midcourt and racing down the court for an uncontested layup. Roughly 35 seconds later, Taylor found Megan Schultz open underneath the basket, and the sophomore laid the ball in for a 21-18 advantage.

But Temple scored the next three points and looked to have done enough to possibly force overtime with a tying bucket inside the final 30 seconds.

Woodland opted not to call timeout, allowing Taylor to drive down the left side of the floor. The senior slammed on the breaks in hopes of launching a go-ahead 3-pointer, but instead, she got run into from behind by a Temple defender while trying to get the shot off.

Taylor knocked down the first two free throws before missing the final one. The missed foul shot didn’t end up mattering, as the Wildcats regained possession late and managed to run out the clock.

“Our best player had the ball in transition,” Morgan said of letting the key possession play out. “I trust her to make a play. To her credit, she got fouled and made a couple of free throws.”

Those freebies completed Taylor’s nine-point night. No other Woodland player scored more than four points, but the impressive defensive effort, limiting Temple to single digits in each quarter, helped the Wildcats snap their losing skid.

“I’m proud of them,” Morgan said. “There’s room for lots and lots of improvement, that’s for sure, but we did enough down the stretch to win.”