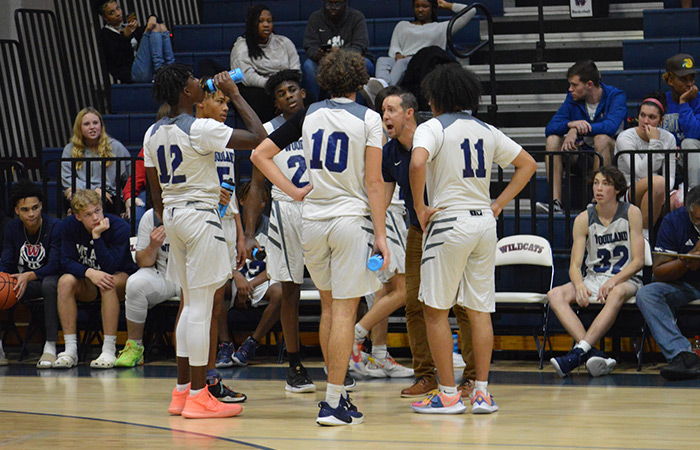 The Woodland boys basketball team started and ended its Tuesday home tilt against Temple on the front foot, but the Wildcats struggled for consistency in between during a 56-49 loss.

Early on, Woodland seemed to be clicking, as the hosts built an 11-2 lead. After the Tigers had thoroughly taken control, the Wildcats staged a late comeback bid.

A 12-4 spurt late in the fourth quarter got Woodland to within three points before a controversial intentional foul call with 8.2 seconds left went against the Wildcats. Temple, then, closed out things by scoring the final four points.

“They’re judgement calls,” Woodland head coach Jacob Selman said, “and you just have to be able to play through it.”

Despite the Wildcats’ quick start, the Tigers managed to rally back for a 17-16 lead by the end of the first quarter. Temple extended its advantage to 31-26 entering the second half.

“I think we hit them pretty hard with our press,” Selman said of what worked early. “I don’t think they were expecting that from the film. We hadn’t done a whole lot of that. I think it caught them off guard.”

Unfortunately, foul trouble kept Woodland (3-2) from being able to utilize the press until late in the fourth quarter.

By then, the Tigers had opened up a double-digit lead. Temple held a 43-33 edge after three periods, and the visitors were up 48-37 nearly midway through the final stanza.

That’s when Woodland began to turn things around. The Wildcats benefitted from some poor shot selection by the Tigers, allowing Woodland to get out in transition and convert at the rim.

“Our energy was still good,” Selman said. “Even though shots weren’t falling at times — I mean it was tough to get shots to fall in certain situations — we were able to make that little bit of a run with our press. We were able to get some easy buckets out of it to try to keep the momentum.”

With the Wildcats down 52-49, an intentional foul call helped the Tigers escape.

Then again, Woodland — which received 17 points from Diaz Garrett, 11 from Brelace Williams and eight from Jayden Hames — did itself no favors by shooting just 11-for-21 at the foul line.

“We missed some key opportunities, where we turned it over in the middle of the paint or missed some key free throws,” Selman said. “Those could have edged us back into the game.”