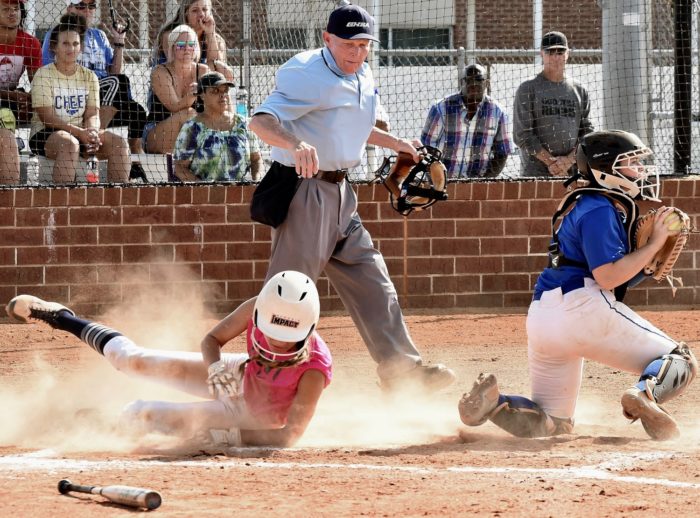 Competing in his first county softball tournament, Montgomery went through all the highs and lows that are synonymous with instant classics.

After falling behind early, the Wildcats rallied back to take a two-run lead entering the seventh inning against the host Colonels. That’s when Cass attempted a comeback of its own, loading the bases against Woodland ace Lainey Baker.

With Ansley Hight at the plate just an inning after launching a solo home run off Baker, Montgomery made the difficult choice to give the Colonels standout the Barry Bonds treatment, intentionally walking in a run to keep Hight from winning the game on her own.

“My assistant coaches kind of talked me into that one,” Montgomery said. “That was kind of a hard call for me. But [Hight] proved that she’s got a lot of power and is a good hitter. They pushed me into it and said, ‘One [run] is better than four.’”

It wound up being the right decision, as Baker coaxed a game-ending grounder back to herself to seal a 6-5 victory and a fourth straight county championship.

“The girls did a heckuva job fighting back,” said Montgomery, who took over this year for longtime head coach Colman Roberts. “… It’s one of those things that doesn’t really count for anything but pride. It would have been easy to just kind of roll through and say, ‘Whatever happens, happens.’ They didn’t do that. They fought back.”

Hight helped stake the Colonels (8-9) to an early 3-0 advantage, singling home one run in the first inning and two more in the third. Her homer in the sixth inning momentarily pulled Cass within 5-4.

“We kept giving ourselves a chance,” Colonels head coach Taylor Washington said. “We showed a lot of fight. I think that’s going to help us at the end of the season. I’m glad to have close games like this to learn from.”

Overall, Hight finished the game 3-for-3, while driving in all five Cass runs. The junior also put up a 1-for-3 line with a walk, two runs scored and an RBI in an 11-3, five-inning victory over Adairsville in the first semifinal of the day.

“They had a pretty good weekend,” Washington said of her team. “I hate to come out on the losing side of that championship game, but I thought our girls showed a lot of fight. We just have to clean up a few things, and we’re right there.”

After their third consecutive runner-up finish in the county championship, the Colonels will turn their attention to returning to the Class 5A state playoffs.

“It’s going to sting a little bit, losing a game like that,” said Washington, whose team placed third in Region 7-5A last season. “But I think the girls will get back up to play next week. They know how important these region games are.”

Woodland (7-10-2) will also be looking to punch a postseason ticket in the coming weeks. Luckily for the Wildcats, they won’t have to face the Colonels again in that pursuit.

“The fourth game you play somebody, there’s not a lot of secrets,” said Montgomery, whose team took two out of the three region meetings this year. “Both teams battled, and that’s what it looks like — a one-run game with both teams having chances to win it. That’s what it should be like when good teams play each other.”

In those regular-season matchups, Peyton Dorn and Baker each picked up a complete-game win. Montgomery decided to use both to come out on top Saturday.

Dorn, a left-handed sophomore, tossed the first four innings. Following a two-run bottom of the fourth, Baker came on in relief to begin the fifth, and the senior struck out four in earning the victory.

“She was kind of mad,” Montgomery said of Baker, who struck out 13 and threw all six innings in an 8-0 semifinal win over Cartersville. “She wanted to start the second one, but they’ve seen her twice. And Peyton pitched a really good game over here in the second game of the doubleheader. She kept them off balance and did the same thing today.

“Whichever way it went, that was kind of the plan that we were going to split them. … We scored two runs and said, ‘Let’s go with Lainey to see if we could get a little jump and a little momentum.’ It worked out.”

Following a 1-2-3 inning from Baker in the fifth, the Wildcats took the lead with a three-spot in the bottom of the frame to hold a 5-3 edge. Woodland tacked on what became a key insurance run in the sixth.

In addition to Baker, the Wildcats saw several seniors step up to ensure the Class of 2022 never suffered a county tournament defeat.

Cassie Jones recorded three run-scoring hits — one each in the third, fifth and sixth innings. Michiah Hicks, who set the tone in the semifinal with a leadoff homer, finished 2-for-3 with a walk, two runs scored and an RBI versus the Colonels. Jessica Ryan came through with arguably Woodland’s biggest hit of the day — a two-out, two-run single to break a 3-all tie.

“It was a little bit personal,” Montgomery said of the seniors’ attitude towards the tournament. “It was the last time they were going to get to play Cass and girls they’ve grown up playing, so it’s a little bit extra for those seniors.”