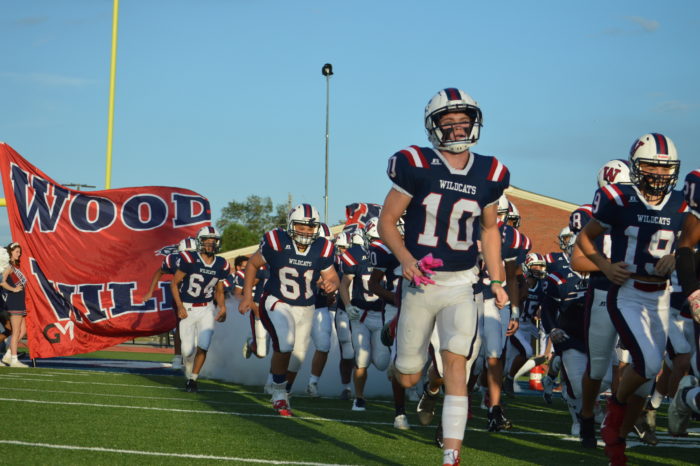 BY NICHOLAS SULLIVAN
In comparison to its 12-0 loss last week at Osborne, Woodland put forth a much better all-around performance versus Hebron Christian Friday at Wildcat Stadium.

However, the visiting Lions managed a few vital conversions, plus a key defensive touchdown, to earn a 34-24 victory.

“We can’t give people points, and we did there,” Woodland head coach Tony Plott said of an interception return for a touchdown. “The fourth-down conversion, we had them in fourth-and-long. They converted and went on to score.

“Those were two big plays that probably turned the tide of the game.”

With the Wildcats (1-2) down 21-14 at the time, the Lions (1-1) scored their final points of a back-and-forth first half on a 20-yard interception return for a touchdown by Ashton Smith. Woodland got back within 27-24 in the third quarter, but a massive 30-yard completion on fourth-and-10 helped Hebron Christian take a two-score lead entering the final period.

Even still, the Wildcats had a golden opportunity to get back within a single score.

Early in the fourth quarter, Asa James broke off a 48-yard run. The senior stumbled just when it looked like he might go the distance, but James still managed to set his team up with a goal-to-go situation.

Faced with a fourth down from the 3-yard line, Plott opted to go for the touchdown only to see the Lions tackle James behind the line of scrimmage.

“I listened to my heart instead of my head,” Plott said of the decision. “We were going to go ahead and kick the field goal there, which would have been the right thing to do. I believe in my kids. I believe that we can get 3 yards. I wanted to put my trust in them.

“It’s easy to look back now and say, ‘We should have kicked it there.’ Honestly, that would have been the right thing to do.”

Woodland forced a fumble on Hebron Christian’s ensuing drive, but the Wildcats turned the ball over on downs after just missing on a few long pass plays. Asa result, the Lions managed to salt away the final 3 minutes, 42 seconds to secure the road win.

The Wildcats drove straight down the field to open the game. On fourth-and-goal from the 1, James crossed the goal line for the first points of the night.

Still working his way back from an injury that necessitates a cast on his right forearm, James continues to see an expanded workload. This week, he saw 25 carries and totaled 155 yards.

“Hopefully, next week, we can lean on him a little bit more,” Plott said.

Hebron Christian, a Class A Private school out of Gwinnett County, responded with a game-tying touchdown on a third-and-12 play, as Gavin Hall connected with KingJoseph Edwards on a 26-yard score.

After Woodland had a long touchdown pass wiped away by a holding penalty, Hebron Christian took advantage of a shanked punt to take the lead. Hall rushed in from 10 yards out for the first of his three touchdowns on the night.

Brelace Williams hit Harlin Morris on a 59-yard touchdown to get the Wildcats back even. Morris leaped to haul in the pass near midfield, spun away from two defenders and easily outraced the rest of the Lions.

“He played a lot of snaps for us,” Plott said of Morris, who is also a standout linebacker and special teams player. “Harlin has worked hard in the weight room, and he’s done what he needs to take care of his body. He has turned into a really good football player.”

Hall shot up the middle on a 44-yard scamper to give Hebron Christian the lead for good late in the second quarter before the pick-6 put the Lions ahead 27-14.

Despite the setback, the Wildcats managed to get some points on the board before halftime, with Christopher Sanchez drilling a 36-yard field goal.

An onside kick recovery to begin the second half and subsequent successful fake punt on a direct snap to Morris weren’t enough to spur Woodland into the red zone. But the Wildcats eventually did claw closer when Williams and Morris hooked up again, this time on a 22-yard touchdown with 4:50 left in the third quarter.

While the stats didn’t necessarily reflect it, Williams, a sophomore, showed some arm talent, finishing 5-for-19 passing for 91 yards and the pair of touchdowns.

“They didn’t have much of a drop off,” Plott said of Hebron Christian’s quarterback switch. “[Hall] is a talented kid also.

“Honestly, I think [Hall] threw the ball a little bit better than [Luttrell] did. It made them more multiple and harder to defend when they could run and throw the ball as well as he could. They ran the same scheme. … Both kids are great players.”

As for Woodland, the strides made between weeks 2 and 3 have Plott optimistic about the Wildcats’ chances of remaining competitive moving forward.

“I think you saw a huge improvement from last week to this week with us. … To come out here and play as well as we did against a really good football team shows the work the kids have put in and how important it is to them to get better.”