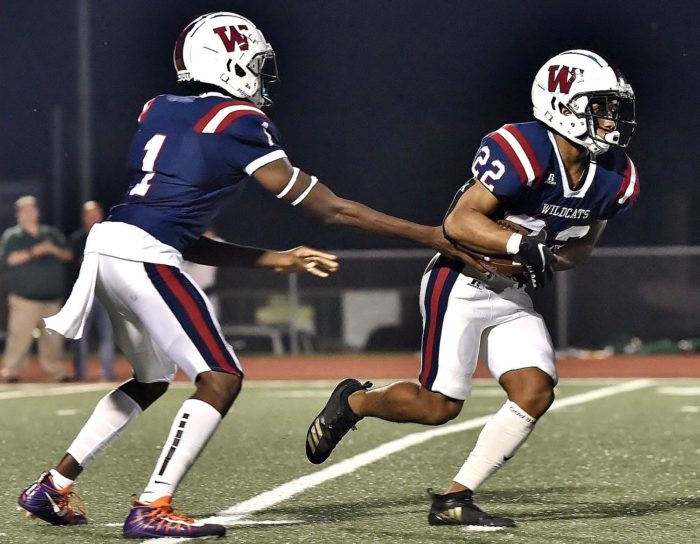 BY NICHOLAS SULLIVAN
Given the struggles a young Woodland football team went through during its non-region schedule, it would have been easy for the Wildcats to be timid entering their Region 7-5A opener.

Despite their 1-4 mark in the non-region, Woodland hadn’t exactly faced a bunch of juggernauts heading into its matchup with Class 5A’s No. 8 team, Blessed Trinity. The Titans — winners of the 4A title every year between 2017-19 — would qualify as such.

Blessed Trinity, though, probably found things a little tougher than it would have expected against Woodland in a 40-3 win in a rare Thursday night game at Wildcat Stadium.

“I think our kids competed,” Woodland head coach Tony Plott said. “They played hard. Their effort is never a question. I thought we were physical at times.

“It’s the self-inflicted wounds that are still hurting us. To beat a good ball team, we can’t do that. It’s something that we’ve got to improve on.”

Plott felt his team didn’t act intimidated in facing such a strong challenge. The Wildcats defense, in particular, made the Titans work to move the ball downfield.

Blessed Trinity’s longest play from scrimmage covered 31 yards. That came on a trick play, as star running back Justice Haynes completed a pass to Ashton Abrew. Haynes did have a would-be 67-yard touchdown called back by a penalty, but otherwise, Woodland did an excellent job of avoiding the home run.

“I thought our defense played great at times,” Plott said. “They were flying around. BT was moving the ball, but we were making them work for everything they got.

Haynes capped an opening drive that took up nearly half of the first quarter, scoring from 7 yards out. The highly touted junior later added a 25-yard score just before halftime for a 27-0 lead at the break. Overall, Haynes accounted for 143 rushing yards, 23 receiving yards and 31 passing yards.

Woodland came close to finding the end zone on a few occasions.

Jaiden Smith, who put together a strong performance in the Wildcats secondary, nearly returned an interception for a touchdown. Later, sophomore quarterback Brelace Williams connected with Jonah Plott on a 37-yard reception — the longest play from scrimmage by either side — to put Woodland at the Blessed Trinity 7-yard line.

After the big gain by Plott, the Wildcats would get no closer to the goal line, but Christopher Sanchez converted a 24-yard field goal to end the shutout bid late in the third quarter.

Williams wound up 7-for-15 passing on the evening. He did complete all four of his attempts on the scoring drive, accumulating 67 of his 96 passing yards during the series. Two of those completions went to Zachary Wiggins, who totaled 34 yards on four catches.

“We’re still trying to iron some stuff out on the offense,” coach Plott said. “I did see flashes there. I thought Zach Wiggins had a great game. He’s a young wide receiver who is turning into a really good ballplayer.”

Next up for Woodland will be a trip next Friday to rival Cass. In a region featuring three top-10 teams (No. 2 Cartersville and No. 7 Calhoun join Blessed Trinity in the rankings), the meeting between the Wildcats and Colonels will go a long way in helping decide the fourth playoff qualifier.

“Coach [Steve] Gates has done a great job there. They are playing really well. For anybody to play them right now, they are going to have their hands full.”