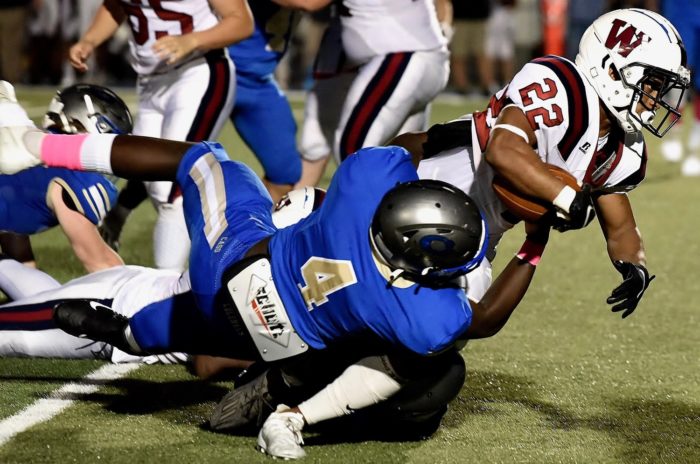 BY NICHOLAS SULLIVAN
The Devin Henderson Show made its latest (and maybe greatest) performance Friday at Doug Cochran Stadium.

Facing rival Woodland at home, the Cass quarterback accounted for 313 yards and four touchdowns in a 35-0 victory in a crucial Region 7-5A matchup.

“Our offense goes when [No.] 7 goes,” Colonels head coach Steve Gates said of Henderson, “and he went tonight.

“We’ve got some other guys who can definitely touch the football. But when the football is in 7’s hands, he does some special things. That’s what we ended up doing.”

Henderson dominated through the air in the opening half, completing 8 of 15 passes (with a few bad drops sprinkled in) for 121 yards. In the second quarter, the sophomore connected with co-stars Tino Jones and Sacovie White on touchdown passes from 20 and 30 yards out, respectively.

Jones leaped high to haul in his pass in the end zone on a third-and-long. Meanwhile, White had much more to do on his score. The sophomore caught the pass at the 20-yard line, shaking off a couple of defenders, stiff-arming another and diving successfully towards the pylon.

After halftime, Henderson attempted just three passes. Although, he completed two of them for 48 yards. Instead, he focused on the ground game, racking up 116 of his 144 rushing yards after the break — in addition to seeing plenty of snaps at cornerback throughout the game.

“He played both sides of the ball and did a good job,” Woodland head coach Tony Plott said of Henderson. “He’s a special talent.”

Even still, arguably Henderson’s most impressive run of the night (at least in the eyes of Gates) came in the first half.

On third-and-6, he dropped back, pulled the ball down and ran for the first down. Henderson initially looked as though he would run out of bounds after picking up the first. Instead, he cut back inside and gained another 5 yards before sliding down at midfield.

“Devin Henderson is going to hit somebody when he can,” Gates said. “That’s a plus and a negative. As your quarterback, sometimes you want him to get out of bounds or slide.

“Then again, he slid in the first half to not take a hit. That tells me he is getting smarter. He knows when he can lower the shoulder on somebody and when he can slide. Those are the little things that I see in the progression of Devin.”

Series regular Freddie Gbadie took on a new role this week, that of touchdown scorer.

Gbadie capped a solid performance with an 8-yard, fourth-quarter score — his first of the season following several close calls. Overall, the junior running back compiled 61 yards on 13 attempts.

“I’m super happy for Freddie,” Gates said. “He busts his tail every day in practice. I’m glad that he got in the end zone tonight.”

Despite being shut out, Woodland didn’t suffer for a lack of chances.

The Wildcats opened the game with a gutsy onside kick that Jeremiah Rhodes recovered in Colonels territory. Woodland went three-and-out but started its next drive with even better field position due to a shanked punt.

After Jones’ touchdown catch, a long kickoff return by Jaiden Smith saw the Wildcats start their fourth series on the plus side of the field. However, Ian Lowe broke up a pass on fourth down, leading to Cass’ second scoring drive.

Woodland had a chance late in the first half to get on the scoreboard, but the Wildcats missed a 30-yard field goal. Moments later, Cass nearly gave Woodland a gift, fumbling the ball to its own 1-yard line only to recover and escape without punishment.

“It’s what we weren’t able to do and things we did to ourselves,” Plott said of the difference in the game. “I think our kids played hard. We made some mistakes, and obviously, they’re a good enough team to exploit them and take advantage of them.”

To start the second half, the Wildcats drove past midfield yet again. That possession, though, ended with a Mark Perdue sack on fourth down.

“The conversation was that we were still in the game,” Plott said of his halftime message. “We’re going to get the ball. We thought we had a chance to get a good return, drive down, punch it in and score, then it’s a different ballgame.”

Down 21-0, Woodland punted from midfield on its next series. The Wildcats’ final three drives ended with an Andrew Nguyen interception, an unsuccessful fake punt and a Perdue pick.

“He struggled early in the season with some injuries and stuff,” Gates said of Perdue, a featured performer last season who has played more of a bit part this year. “He’s finally getting back. …

Next week, Woodland, which received 89 rushing yards on 16 carries from Asa James, will head to Calhoun.

“We’ve got to grow up,” Plott said. “Going on game eight, being young doesn’t hold a whole lot of water anymore. We have seven games under our belts now, and we need to start playing like it. …

“Now it’s time, for us as coaches, to put them in a position to have success and let them showcase their talents. We have to do a better job also as coaches.”

Cass will be back at home, hosting Hiram with a chance to take a huge step towards locking up a Class 5A state playoff berth.

“We went to a winless Hiram team, and they beat the brakes off of us,” Gates said of last year’s meeting. “That all falls on me. I said it last year, I didn’t have us prepared.

As such, the next episode of The Devin Henderson Show will be a must-watch event.