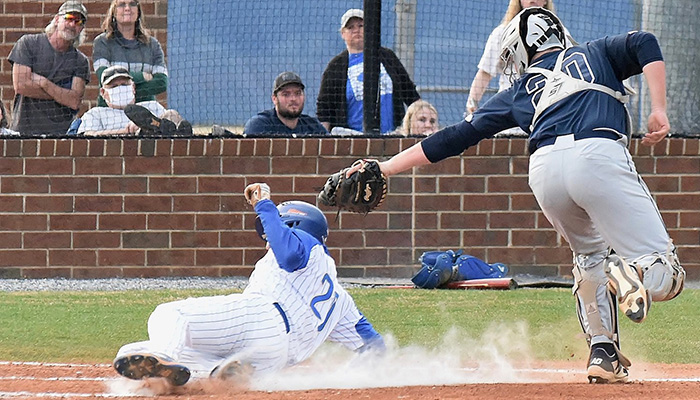 BY NICHOLAS SULLIVAN
On March 12, 2020, sports came to a screeching halt in Bartow County amid the COVID-19 pandemic.

Exactly one year later, things felt almost back to normal, with rivals Woodland and Cass facing off in a Region 7-AAAAA doubleheader.

After dropping the opener of the three-game series Tuesday on the road, the Colonels swept the Wildcats by scores of 3-2 and 8-1 in the twin bill Friday at home. While the region schedule is only 20% complete, Friday’s results could prove pivotal in the race for the state playoffs.

“I think if you had asked [Woodland head coach Matt Montgomery], you had to win this [series] to have a chance to get into the playoffs between us two,” Cass head coach Tim Ayers said. “There’s Cartersville, Calhoun and Blessed Trinity, and they’re going to be tough. Whoever won this [series] would be in the driver’s seat to at least get the four spot.

“But you still have to win. We go to Hiram next week, and if we don’t play well, then it didn’t matter.”

The importance of Friday’s games would not have been lost on any of the Wildcats. In fact, Montgomery believes it’s possible that the emphasis placed on a singular doubleheader less than a month into the season might have negatively impacted his team.

“I told them, ‘We can’t go back and win them,’” Montgomery said of his postgame message. “It is what it is. It happened. We have to move forward.

“I think we put a lot of pressure on ourselves that wasn’t necessary. This was the first three games of 15 region games. … You have to play one at a time. I think that was part of the problem. I think we looked a little too far down the road.”

Coming off Tuesday’s matchup that featured a combined one run on two hits, the Colonels (3-10, 2-1) and Wildcats (5-8, 1-2) both appeared to let nerves get the better of them.

The pitching was a little shaky early, but strong defense and poor base running combined to limit the offensive damage.

Woodland benefited from four first-inning walks to score the game’s opening run. The Wildcats also took advantage of a passed ball in the fourth inning, as they later scored on Ayden Ray’s sacrifice fly to tie the score at 2-apiece.

Meanwhile, the Colonels pushed across a run in each of the first two innings. Cass utilized three singles to score its initial run, and the hosts used a passed ball to score their second. The Colonels would have scored in a third straight frame, but a strong Julian Wright-to-Jakiyon Porter-to-Carter Heath relay cut down a runner at home to end the inning.

After some shaky moments early, both starting pitchers — Cass’ Trey Scott and Woodland’s Scotty Smith — settled down and wound up tossing five innings.

Scott only allowed three hits but walked seven, albeit just three after the rough first frame. The senior struck out five.

“We’ve been working on his routine between pitches and just staying in the moment,” Ayers said of Scott. “He got the first two quick outs [in the first inning], and then he lost it. We kept telling him, ‘You need to stay in the routine. Same thing over and over. Just command the strike zone.’ He settled down and was able to do that.”

Scott actually faced one batter in the sixth inning, but after walking Porter, he was lifted in favor of Jayden Smith. Another senior, Smith suffered the hard-luck loss Tuesday, despite striking out a dozen.

Smith put up two shutout innings Friday. This time, the southpaw took home the win — thanks to himself, with an assist from Matt Shook.

A single up the middle by Smith opened the home half of the seventh. Smith moved up to second on a ball in the dirt, and with two outs, he scored the game-winning run on Shook’s shot into the left-field corner.

“Tuesday night, he had a chance to do it and couldn’t come through,” Ayers said of Shook. “I knew if you give him more than one chance, eventually, he’s going to come through. …

“He’s got to be one of the better hitters in the county.”

Cass’ strong pitching carried over into the nightcap, where Jordan Gani nearly matched Smith’s stellar line from Tuesday. The senior right-hander racked up 11 strikeouts against three walks in a one-hitter.

“This is probably the best week of baseball we’ve played, but it all started with the pitching,” Ayers said. “… We weren’t on our heels, and we weren’t walking people. We made them put it in play. Those three seniors stepped up this week and did what they needed to do. We’re happy about that.”

Offensively, Gani paced the Colonels, finishing 2-for-3 with a walk.

Cass scored twice in the second inning and three times in the following frame. Woodland, though, managed to stay in the game. The Wildcats even loaded the bases with no outs in the fifth.

Gani limited the damage, sandwiching strikeouts around a Chase Carson sac fly. The Colonels followed with a game-sealing, three-run outburst in the bottom half of the inning.

“They capitalized when they got chances, and we didn’t,” Montgomery said. “We didn’t execute very well at the plate. When we got opportunities, we left them out there. They scored when they got them, and we have to tip our hat to them.

“That was the difference.”

With three games next week against Hiram, which suffered a trio of 10-run losses to Cartersville, Cass will have a strong chance to move to 5-1 in the region. Given that the Colonels entered Friday with a 1-10 overall record, it would mark a significant turnaround.

With a strong senior class, Cass started the season with high expectations. The Colonels were 7-4 when last year’s campaign suddenly ended.

Ayers believes the layoff possibly contributed to the slow start. But he hopes Friday’s performances are a sign that this season will be special.

“It’s crazy to think that was a year ago,” Ayers said of the 2020 season being canceled. “A lot of those kids lost a lot of experience, because they didn’t get to play — even through the summer. Some of those kids, even the seniors who have played a lot, basically went a whole year without getting to play much.

On the other side, Woodland will look to shake up the postseason chase by upsetting Blessed Trinity at least once next week.

Even though Friday’s losses hurt, the Wildcats can take solace in knowing that this March 12 went better than the last one.

“We just have to look forward and not get tripped up on what’s behind you.”