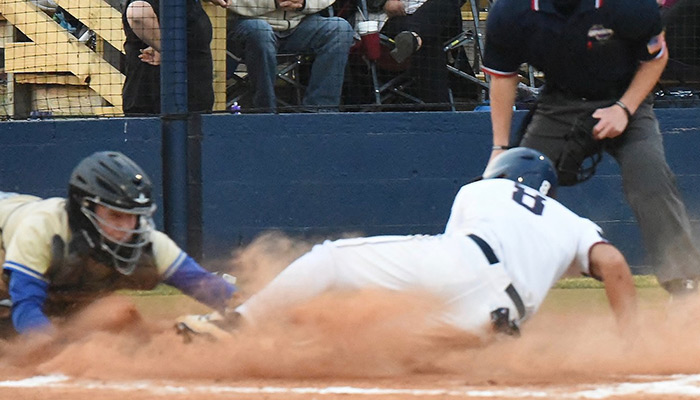 When baseball rivals meet in a region opener, it’s destined to be a close game.

Sometimes, the pitchers are tight, leading both offenses to pile up runs and hits. Other times, the hurlers get in a groove and a pitchers’ duel ensues.

Tuesday’s meeting between Cass and Woodland certainly fell into the latter category.

With the Colonels’ Jayden Smith racking up a dozen strikeouts and the Wildcats’ Peyton Posey efficiently breezing through seven strong innings, it took just one unearned run for Woodland to earn a 1-0 home win.

“Both of those guys are competitors,” Wildcats head coach Matt Montgomery said of Posey and Smith. “… It was cool to watch Peyton do it. Not so much watching the other guy do it to us. You tip your hat, because he went out there and did a good job. He kept everything around the plate and was tough for us to hit, obviously.”

Each pitcher allowed just one hit and issued a single walk.

Posey, who totaled six strikeouts, allowed just three baserunners. After Kyle Miller’s two-out double on a blooper to right in the third inning, the senior got the next hitter to ground out. In the fourth, he ordered up a 6-4-3 double play following his only free pass.

“The moment is never going to be too big for him,” Montgomery said of Posey, who has signed to play baseball at Shorter. “He’s been in big situations before. He’s been throwing since he was a freshman for us.

Posey had to be on his A game Tuesday, because Smith was absolutely dealing on the other side.

The southpaw worked out of trouble in the first inning. Smith gave up his only hit in the form of a two-out single to Jacob Gravett. A dropped third strike put runners on the corners, but Smith struck out his counterpart to end the threat.

“We’ve been telling Jayden all along that if he can just command two pitches, he’ll get people out,” Colonels head coach Tim Ayers said. “Tonight, he had command of both pitches. He actually had command of three. His changeup was pretty good. He didn’t need to throw it that much. But when you can command two pitches in high school baseball, you can’t ask for anything more on the mound.”

An error to open the home half of the third inning allowed No. 9 hitter Julian Wright to reach base safely. The speedy sophomore moved to second on a sacrifice bunt by Chase Carson, stole third and scored on a wild pitch.

“We’re going to have to capitalize on things like that,” Montgomery said of being able to manufacture a run. “We can’t wait for three hits to score every run. There’s going to be times when we have to take what they give us. When we can take free bases, we need to do that and put us in that situation.

“If [Wright] doesn’t do that … we may still be playing baseball right now.”

The biggest benefit gained from Tuesday’s pitching display, which saw just 159 total pitches thrown in roughly 80 minutes, is that neither side needed to waste any other arms ahead of a doubleheader rematch Friday at Cass.

“When you’ve got two guys who can do that,” Montgomery said, referring to Posey and Smith, “it’s nice for the coaches to know you have almost a full arsenal going into two games on Friday.”

While both coaches were understandably pleased with their pitchers, Montgomery and Ayers won’t complain if the doubleheader produces a little (or a lot) more offense.

“Having that one under our belts and playing well — I know we didn’t hit well, but we played good defense and Peyton threw a heckuva game — maybe we can relax and execute a little bit better,” Montgomery said.

In a series that could wind up being pivotal in the playoff race, Tuesday’s victory was important for Woodland. But the result of Friday’s twin bill could be even more impactful, particularly if there’s a sweep one way or the other.