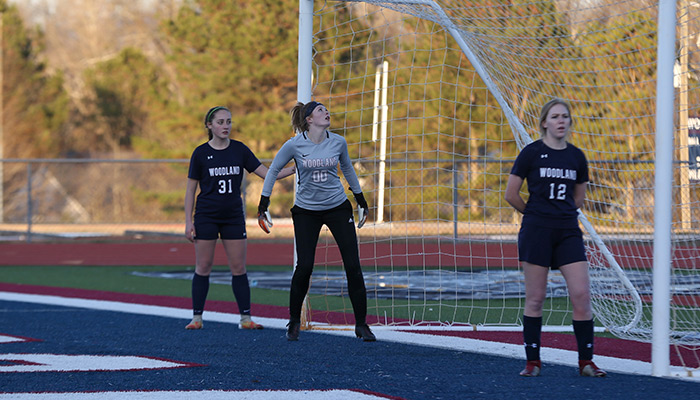 BY NICHOLAS SULLIVAN
Every high school athletics program in Bartow County has experienced some level of adversity over the past calendar year.

Cass girls soccer is no exception. In fact, they’ve had it tougher than pretty much any other local team.

While the Colonels have dealt with more than their fair share of injuries throughout 2021, that’s nothing compared to the heartbreak of losing their beloved coach, Phil Phillips, to cancer prior to the start of the season.

With Phillips’ death occurring less than three weeks before its season-opening scrimmage, Cass has done an enviable job of coming together in the wake of an unimaginable loss.

“This team is all heart,” Colonels coach Dan Armstead said. “They’ve overcome so much. From the loss of their legend of a coach in Phil Phillips before the season started and just coming together as a team, pushing through all of the injuries and other drama issues that come with a high school team, they’ve really started playing well.”

No performance showcased that better than Cass’ 3-1 win against Woodland in a Region 7-AAAAA match Friday at Doug Cochran Stadium.

Playing their rival in what essentially served as a Class 5A state tournament play-in game, the Colonels came out strong, weathered a stiff challenge from the Wildcats and ultimately emerged with a playoff berth.

“Some of these girls, I’ve known since they were 6 years old,” Armstead said of Cass’ nine-person senior class. “I’ve coached them in pee-wee soccer and on up through club ball.

“To see them go to state in their last season is an amazing gift for them. I couldn’t be happier for them.”

One of those 12th-graders, Maddie Shook helped get the Colonels off to the perfect start. Just minutes into the games, Shook lashed home a shot from well outside the 18-yard box for a quick 1-0 lead.

Cass (6-10, 2-3) kept up the pressure, and with just under 10 minutes left in the first half, Morgan Tompkins doubled the advantage.

“They came out on fire,” Armstead said. “They were pumped up in the locker room for a crosstown rivalry game. The fact that this was a make-or-break, go-to-state-or-go-home game, they were ready to go from the get-go, which is any coach’s dream.”

Four minutes after falling behind 2-0, Woodland cut the deficit in half. After Tiera Feanny saw her shot saved by a sliding Yecenia Hernandez, Reagan Weightman followed up, slamming the ball into a virtually wide-open net.

“When we get a goal scored on us, we often give up,” Wildcats head coach Nicole Heiser said. “But at least in this game, we really had the fight. After being down two goals, we went ahead, got one in and had the momentum. We weren’t able to finish the game, but to me, it showed a lot of growth throughout the season. …

“I’ve seen a lot of growth in the team. We have one more home game left — the Thursday after spring break. I hope I can continue to see that growth and that it continues on into next season, as well.”

Coming out of halftime, Woodland looked the likelier of the two teams to score again, as Weightman had a couple of good chances that missed narrowly wide.

Cass launched some dangerous counterattacks before eventually regaining more possession. The Colonels effectively put the game away in the 71st minute, when Anna Marsala’s deflected strike wrong-footed the Wildcats goalkeeper and nestled into the corner.

“Woodland is a good team; there’s no doubt about it,” Armstead said. “Credit to them for all they’ve done. Our girls recognized that we were losing the momentum, and that Woodland was putting us back on our heels. I give credit to our girls for fighting back. A lot of teams would have backed down, but ours stepped up.

“They realized everything that was on the line, and they were able to push forward to get the momentum swinging back in our direction.”

In the end, Cass received goals from a senior (Shook), a junior (Tompkins) and a sophomore (Marsala). After playing last season (or at least a partial season before the COVID-19 pandemic struck) with no seniors, this year’s team is incredibly experienced.

Even the younger players have received ample playing time, allowing the team to more easily fill in the gaps caused by injury.

“No doubt, Phil set it up right,” Armstead said. “He and coach [Shannon] Brennan actually worked together to get the younger group involved.

“Although we’re losing nine seniors, which is going to be hard to replace, we do have a really good stock of players coming up who are really going to contribute well to this team. I think the future looks bright for Cass soccer.”

Heiser hopes she can say the same thing about her program.

“I had three subs today,” she noted. “Two girls were out with COVID stuff, and two starters were out with injuries. It’s definitely been a challenge.

“I’m glad we were able to play this year. I’m glad we got some new players out this year, and I think that’s going to help grow the program.”

Woodland will lose only three seniors — Feanny, Hayley Gilbert and Sydney Molinaro — which should allow the Wildcats to return a solid foundation. Regardless, Heiser would have enjoyed seeing the trio end their careers in the state tournament.

“As I told them in our little pep talk, we have one home game left, and we can really send the seniors off.”

Cass, likewise, will play one more regular-season game (April 15 at Kell) before a trip April 20 to Region 6-AAAAA champion Grady.

The Colonels certainly will be hoping to pull off the upset against the seventh-ranked team in the classification. But no matter the result, each and every player should be able to rest easy, knowing that they made their late coach proud this season.

“Whenever they were not playing well — either in a practice or in a game — they would say, ‘We’ve got to do this for coach Phil,’” Armstead recalled. “Coach Phil is one of the hearts and souls of the coaching community, especially here at Cass but in all of Bartow County, really.

“I know he’s looking down with pride right now.”