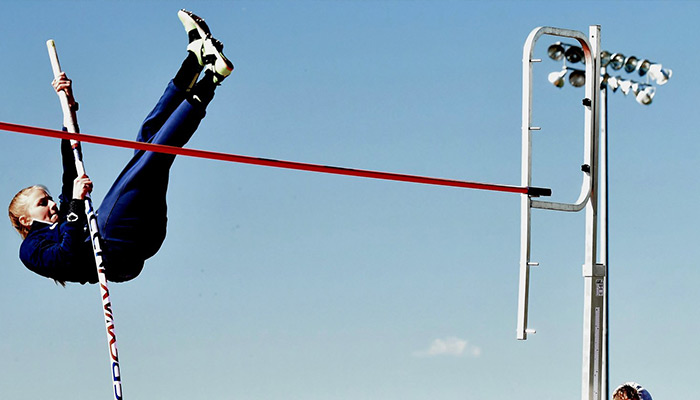 The Wildcats topped the girls standings, finishing with 93 points. The runner-up Canes wound up with 72, while Cass (54 points) and Adairsville (34) placed third and fourth, respectively.

In the individual running events, Brittan Walker claimed first in the 100, Clayton Long earned the 400 title, Collin McCann topped the 1600 leaderboard and Sam Peters picked up a win in the 3200.

The Canes also emerged victorious in both hurdling events, as Eric Toviave won the 110 and Chris Ejieke edged Toviave in the 300. Cartersville’s other victories came in the pole vault, courtesy of Ben Camara, and in the discus, thanks to Jaylon Scott.

Woodland’s Olivia Berry and Rylee Evans finished 1-2 in the 1600 and 3200 to help boost the Wildcats. Speaking of boosting, Emmie Berry pole vaulted her way to a title, and Sydney Molinaro claimed the high jump crown.

Other wins for Woodland came from Kiconco Bassler in the 100 hurdles and the 4×100 team — that opened with Bassler and closed with Molinaro.

While Elizabeth Nelson (800) managed the only individual win for the Cartersville girls, the Canes did win the 4×400 and 4×800 relays.

Kaitlyn Godwin put together a phenomenal performance for the Cass girls. The freshman finished first in the 100, 200 and 400.

Raziyah Ware also had a big day, as the junior won the discus and shot put. Teammate Tatianna Christian placed runner-up in both events.

Josh Varnum produced a win in the 200, while also coming in second in both the 100 and high jump.

Jashaun Brown Whatley earned first in the long jump. The sophomore placed second and third in the 110 and 300 hurdles, respectively.

On the boys side, Tre Mitchell (high jump) and Dylan Matthews (triple jump) earned first-place finishes for the Tigers.