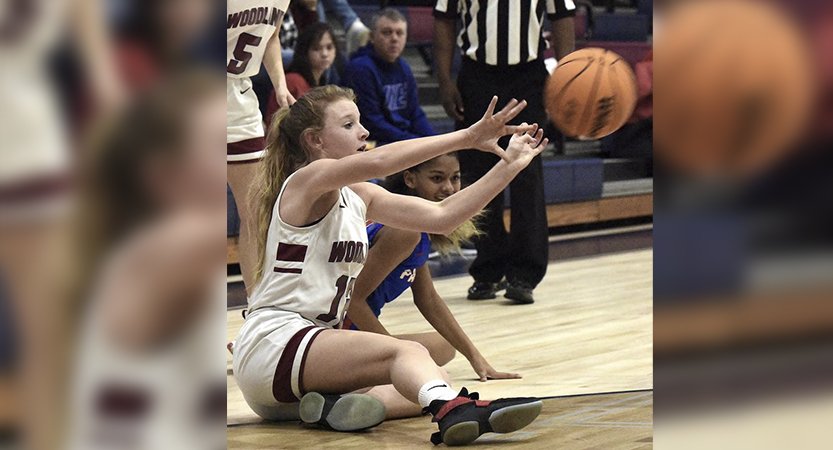 With the Cass girls trailing rival Woodland by six points late in the third quarter, Claire Davis buried a 3-pointer to halve the deficit. Mere seconds later, the sophomore picked up her fourth foul, earning a trip to the bench.

That didn’t stop Colonels head coach Burt Jackson from sending Davis back onto the court with a few seconds remaining in the period after his team had regained possession. Davis responded with another cold-blooded trey to tie the game just before the buzzer sounded.

Cass went on to score the first eight points of the final period and later held off a Woodland comeback bid to grind out a 42-38 win Tuesday in Region 7-AAAAA.

“I’m extremely pleased that we found a way to win a region game on the road against a crosstown rival,” Jackson said. “I don’t think [Wildcats head coach] Kyle Morgan gets enough credit for how good of a coach he is. I’d like to see what he could do with another team in our region’s talent. He works them hard. They were prepared.”

The spurt threatened to turn the second half into a one-sided affair. However, the Wildcats came out strong to begin the third quarter, scoring the first nine points of the stanza to reclaim the lead.

“I was proud of the kids,” Morgan said. “They competed. It could have went either way to start the second half. If they had won the first two minutes, it could have gone downhill for us. But the kids went out and responded.”

Cass senior Ariana Hames ended the run with a 3-pointer, but Woodland responded with the next seven points to hold a 29-23 advantage. The Wildcats looked set to take a multiple-possession lead into the fourth quarter before Davis’ pair of 3s turned the tide.

“Unfortunately, we didn’t close the quarter well,” Morgan said. “… That was a big six points in about a 30-second span.”

Sending Davis into the game with four fouls and only a couple of seconds left in the third quarter was a bit risky, but Jackson knew his team could use another big shot heading into the final period.

“I was having to take a chance,” Jackson said. “Claire averages 20 points a game. You can’t lose that, especially with our struggles offensively tonight. … The fouls being called against her were really bothering her.

“She gathered herself, and maybe, sitting her out and putting her back in kept her calm. She told me with two minutes to go in the game, she said, ‘Coach, I won’t foul again.’ I trusted a sophomore not to do that, and to her credit, she did a good job.”

Woodland hit a couple of triples — one each by Jordan Thompson and Ansley Evans — in the second half of the fourth quarter to hang around. But the Wildcats never managed to force the Colonels to seal the game at the foul line.

“At times, I thought we could be our own worst enemies,” Morgan said. “We were sloppy with the ball, missed some layups and missed some free throws.

“I think, they were 9-for-9 from the line. Credit goes to them, they were a little bit better than us tonight.”

Davis was a big reason for that, finishing with 20 points. Londaisha Smith had another fantastic fourth quarter, helping close out the game with nine of her 13 points in the period. The rest of the Colonels combined for just nine points, with Hames’ 3 comprising the entirety of the group’s second-half scoring.

“I was very concerned, coming into their gym off a three-day break,” Jackson said of Woodland. “I was worried we would take them lightly. I don’t think we did, but to Woodland’s credit, they forced us to make shots from the outside. We were off for most of the game.”

Woodland was led by Evans, who ended with 11 points. Carli Clymer and Abigail Taylor each added eight points.

“If we could a little bit more consistently, we would be a tough out,” Morgan said. “… I just wish they could experience a little more success with the final scoreboard.”

The Wildcats, though, have shown improvement. After losing to the second-ranked team in Class 5A, Kell, last week by 12 points, Woodland fell to Cass by 24 fewer points than the teams’ first meeting.

While some would assume a playoff-caliber team like the Colonels would have beaten the Wildcats more easily, that idea discounts just how difficult it is to earn victories, especially on the road, in 7-AAAAA.

“You can tell that Woodland is seasoned after having to play everybody in this region,” Jackson said. “It seemed like whatever we threw at them didn’t really bother them too much.

“I’m proud of our girls for finding a way to not panic and win a close game on the road. But all the credit goes to Woodland — their coaches and their players — they played us really tough.”