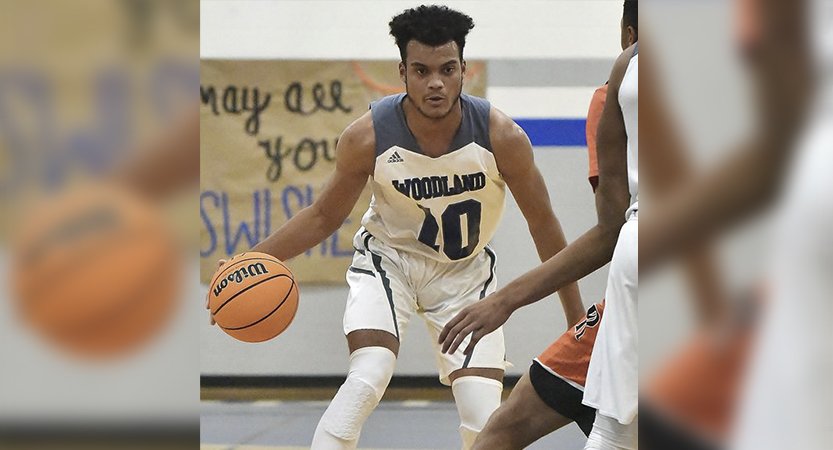 Cass junior C.J. Pipkin heads towards the basket while being defended by Woodland junior Troy Poche during Tuesday’s game at Woodland. Pipkin had 17 points in an 80-42 win.

The Cass boys jumped out to a 25-6 lead after one quarter and never took their foot off the gas in a dominant 80-42 win Tuesday over Bartow County and Region 7-AAAAA rival Woodland.

The victory puts the Colonels in position to lock up a top-four seed in the region tournament with a Friday win over Villa Rica.

“We’ve talked about all season how we don’t want to play up or down, we want to make sure we’re playing to build habits,” Cass head coach Sean Glaze said. “With a young team, it’s easy to go in thinking, ‘This team hasn’t won a whole lot.’ You go in expecting stuff instead of earning stuff.

“I thought, to our credit, our kids did a fantastic job of playing with the intensity that we want to play with the rest of the year. Defensively, I thought we had a really good first half. We did a nice job of running our stuff and getting good looks. Those are the habits you want to build, so I was very pleased with our effort tonight.”

From the opening few exchanges, it became clear the Colonels (14-9, 9-5) had put its overtime loss Friday at Carrollton behind them. The Wildcats (2-20, 0-13) were just the unfortunate team on the receiving end of a strong bounce-back effort.

Cass reeled off the first 14 points of the game. They went on to lead 21-2 before holding the 19-point advantage entering the second quarter. C.J. Pipkin had nine points in the opening period, while Zaylan Chaney added eight points. Braxton Benham also knocked down a pair of 3-pointers.

Jaden Johnson had all six of the Wildcats’ points in the first quarter. He ended up with 19 points in the game, while none of his teammates had more than six.

“They did a good job of pressuring us and causing us to turn over the ball,” Woodland head coach Jacob Selman said. “But really we’ve struggled trying to get the ball across the half-court line the past few games. … We’ve been kind of stagnant and not attacking with the basketball.”

Chaney absolutely had his way with the Wildcats in the second quarter. The 6-foot-4 sophomore bullied his way to 13 of his game-high 26 in the period. Meanwhile, the Cass defense continued to cause Woodland problems, leading to a healthy 44-18 halftime lead.

“I feel like they had to earn some,” Selman said of his team’s defensive effort. “They did that by cleaning the offensive glass. The second-chance opportunities they had were way more than ours. I felt like we had a lot of one-and-dones and was back playing defense again. They got two and three opportunities each time down the court, and that just broke our backs.”

Along with Chaney’s dominant game, Pipkin and Benham wound up with 17 and 16 points, respectively. Pipkin had six points in the third quarter, as the Colonels held a slight 15-13 scoring edge in the period. Benham later racked up half of his points in the fourth quarter.

“It was good to get everybody some good minutes,” Glaze said. “We talked at halftime about not playing to the scoreboard but playing to habits.

“I think earlier in the year, we may not have had that type of response. They are maturing and developing this season. We have a bunch of guys who have their eyes on what they want to accomplish.”