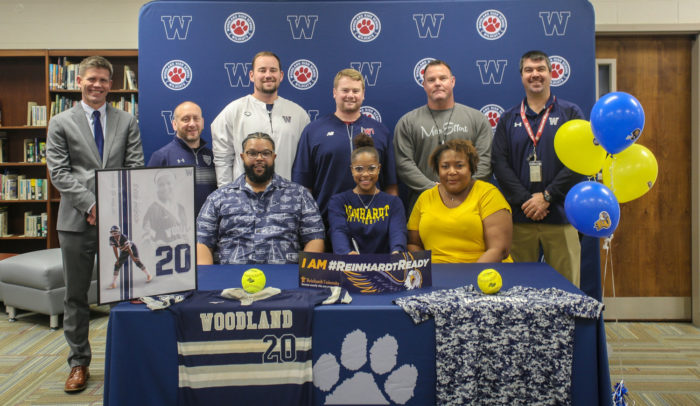 BY NICHOLAS SULLIVAN
For the past few years, Cass’ Eryn Lee and Woodland’s Michiah Hicks have been among the best softball players in Bartow County. Soon, the high school rivals will get to be collegiate teammates, having both signed scholarships to play at Reinhardt.

“Eryn earned the opportunity to play at the next level,” Colonels head coach Taylor Washington said. “She is constantly pushing herself to be better. During the time I have known her, Eryn put herself out there by going to college recruiting camps and competing in high level showcase tournaments.”

It was actually one of those types of camps, hosted by the Eagles, that helped lead Hicks to ink with Reinhardt after initially being committed to Albany State.

“When [Albany State’s] head coach resigned, she wanted to open back up and consider other options,” Wildcats head coach Matt Montgomery said. “Michiah was invited to a camp at Reinhardt and performed well when she got there. Her offer came later.”

Unlike Lee, who was a four-year starter, Hicks burst onto the scene later in her career. The left-handed hitter recorded just 13 plate appearances as a sophomore, but the following year, Hicks put together a remarkable campaign en route to earning The Daily Tribune News Player of the Year accolade.

She followed it up with an arguably more impressive senior season, somehow improving on her already lofty triple-slash line despite battling a nagging shoulder injury. Her counting stats dipped a bit due to the graduation of a few talented teammates, including current Reinhardt player Ansley Evans, which contributed to Hicks settling for DTN offensive player of the year selection this past fall.

“I was very proud of how she battled through her injury,” said Montgomery, who took over the Wildcats program prior to the 2021 season. “She tore her labrum diving back in to second base during a summer travel game. She battled through pain, dealing with a brace on her front shoulder as she was hitting. She went twice a week all season to physical therapy to work her way back on the field to join her teammates. She was actually able to work her way back to be able to throw enough to play defense for us by the end of region and throughout the playoffs.

“I don’t think anyone can question her toughness after this season.”

As noted above, Lee stepped onto the Cass field as a freshman and wound up seeing action in 110 games. The speedy middle infielder received some form of DTN all-county recognition each of her four seasons.

Overall, Lee finished her Colonels career with 112 hits and an equal number of runs scored, to go along with 49 RBIs. The right-handed hitter drew 50 walks against 32 strikeouts. She also stole 59 bases, while only getting caught three times.

“Eryn has grown her knowledge and skill of the game throughout the past four years because of the work she has put in, but she has also grown tremendously as a leader,” Washington said. “I believe Eryn is so successful in a leadership role because of the respect she has earned from her teammates through her actions. She is able to hold them accountable, because they always see her doing the right thing and they know she is coming from a place of love for her team.”

During Lee’s time at Cass, the Colonels went from a four-win team in 2018 to reaching the Class 5A state playoffs in back-to-back seasons. Granted she had plenty of on-field assistance from her teammates, but Lee’s presence in the dugout proved vital in helping Cass end a long postseason drought.

“I could write a book on all the ways Eryn Lee has positively impacted this program,” Washington said. “It is special when one of the most talented athletes on the team is also one of the hardest workers and has a great attitude. It makes the job of holding our younger athletes accountable easier, because they see her setting the example of doing all the right things and see it paying off.”

Similarly, Hicks, with the help of her Class of 2022 teammates, pushed Woodland to never-before-seen heights in recent seasons. Following consecutive Sweet 16 berths, the Wildcats finally broke through to reach the quarterfinals in 2020. This past season, Woodland managed to reach the state tournament in Columbus for the second time in school history and record the program’s best-ever finish of fourth place.

“I can’t say enough about our entire senior class this year,” Montgomery said. “After having to battle through last year with all of the COVID restrictions and stress, not getting to go to Columbus, and then having a coaching change is always hard. The way this entire senior class embraced the new staff and our philosophy is a huge reason why we ended our season so successfully.

“Michiah was a big part of that.”

Both coaches believe their individual signees possess the traits necessary to put together successful careers in Waleska.

“Eryn is the kind of teammate everyone looks for when things aren’t going our way,” Washington said. “She has a calmness and confidence about her that her peers gravitate toward. For example, we had a Colonel Leadership Award that was voted on by the girls on the team. Every single player voted Eryn for this award. Each gave multiple reasons and examples of why she was deserving.”

Said Montgomery, “Michiah is a fierce competitor. She has no problem being a leader on the team and trying to motivate her teammates in practice or in a game. She works extremely hard on the field and in the classroom, which is why she has the opportunity to have her college paid for while getting to continue to play softball.”