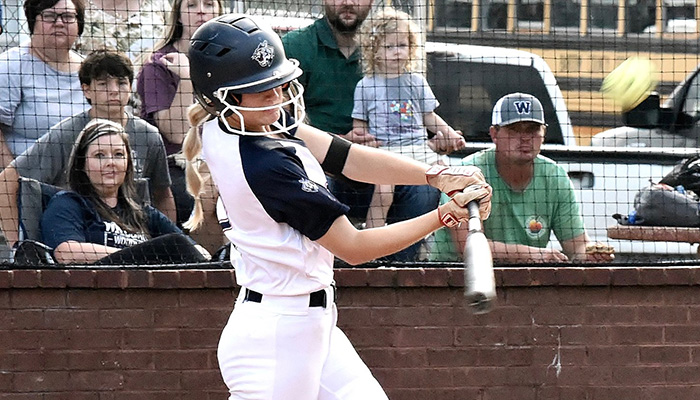 BY SCOTT POWER
A good week for the Woodland softball team concluded with a 10-0 drubbing of visiting region foe Hiram in five innings on Thursday, Sept. 8.

The Lady Wildcats scored six runs in the second inning to break open the game and that was more than enough as pitchers Haley Collum and Peyton Dorn combined for a one-hitter.

Woodland went 2-0 with a pair of shutout wins, including a 12-0 win over Wheeler on Wednesday, Sept. 7, and a close loss to Region 7-5A leading Calhoun on Tuesday, Sept. 6.

“That’s three games in three days for us,” Woodland Coach Todd Eubanks said. “We are hitting the ball well. We are adjusting well. We faced a lot of off-speed pitches tonight and we hit it. We pitched it really well. Haley and Peyton complement each other and they did a good job. That’s two straight shutout wins and the girls are having fun.”

Woodland opened the scoring with a pair of runs in the second inning. Jordan Hammonds walked and later scored on a hit by Kamryn Smith. Cambrie Carrington then followed that up with a single that brought home Smith to make it 2-0.

The Lady Wildcats then scratched out six runs in the second inning. Bailey Sakacsi and Mackenzie Araya led off with singles and Ashlyn Baines was hit by a pitch to load the bases. Alana Carnes drew a walk to bring in a run and Hammonds then had a RBI groundout to put Woodland up 4-0.

Dorn then tripled to clear the bases and put the Lady Wildcats ahead 6-0. Smith doubled home Dorn and Collum brought home Smith on a single to make it 8-0.

Woodland then pushed across a pair of runs in the fourth. Smith hit a two-out single and stole second base. Carrington then drew a walk. Both runners scored on a double by Collum to give the Lady Wildcats a 10-0 lead.

Collumn kept the Lady Hornets at bay all night before giving way to Dorn in the final inning. The game ended after 4 1/2 innings due to the run rule.

The Lady Wildcats cranked out 10 hits with Smith going 3-for-3 with two RBIs and scored three times. Sakacsi and Collum each had two hits with Collum driving in three runs. Dorn had two RBIs.

Collum pitched four innings and only gave up one hit and no runs. She walked one and struck out four. Dorn pitched the final inning and struck out one without giving up a run or a hit.

Woodland blanked Wheeler 12-0 in four innings on Wednesday, Sept. 7, in a non-region matchup.

The Lady Wildcats were up 2-0 and then scored five runs in the third and five more in the fourth to come away with the victory.

“We finally got two-out hits with runners on base,” Eubanks said on Tuesday. “We got some runs and it snowballed from there. Everybody got to play and the kids played well. “

Then Woodland scored five runs in the third. Smith and Collum started the inning with a walks. Baines then singled to bring home pinch runner Ellie Parker.

Carnes then singled in Collum and Hammonds brought home Lanie Calhoun, who had walked earlier in the inning, to make it 5-0. The final two runs of the inning came on a single by Peyton Dorn, which brought home pinch runner Bailey Gestner and Carnes.

The Lady Wildcats then put the game away with five more runs in the fourth. The first three batters reached safely as Carrington walked, Elizabeth Hartsfield singled and Sakacsi was hit by a pitch to load the bases. Calhoun then drew a walk to put Wooldand ahead 8-0.

One out later, Karmen Zeferino singled home courtesy runner Lexie Anderson and then a walk by Gerstner brought in Sakacsi to make it 10-0. The final pair of runs came on a single by Brooke Edmondson that scored Taylor Adcock, who had reached on a fielder’s choice earlier, and a single by Ashlyn Dowdy the brought home Zeferino.

Baines picked up the win in 3 1/3 innings. She allowed no runs on two hits while walking three and striking out none. Dorn got the final two outs of the fourth without giving up a hit or a run.