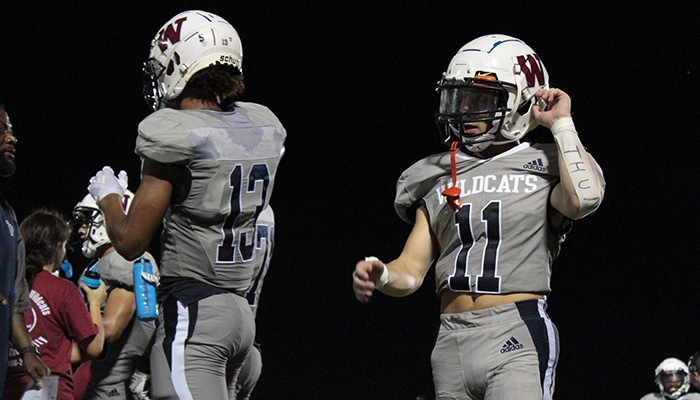 Woodland High Head Football Coach Brandon Haywood said it was apparent that his team just wasn’t playing with the right energy level from the get go.

“We were flat coming out,” he said. “And that kind of set the tone for the game … this was not the same team that played Model a week ago.”

Pepperell rusher Gage Owens got the Dragons on the scoreboard first, rattling off a roughly 20-yard touchdown run with about seven and a half minutes remaining in the first quarter.

A costly pick-six hauled in by Dragons’ defender DeMarcus Ragland midway through the second quarter made it 14-0 in favor of Pepperell.

With about five minutes left in the first half, D.J. Rogers notched an 18-yard touchdown rush, as the follow-up PAT from Pepperell kicker Steven Villatoro made it 21-0, Dragons.

“They do a lot of things well upfront with their blocking schemes and just getting after people,” Haywood said of the opposing team. “It’s just us, we’ve got to change the mentality of how we attack people and stop being attacked by people.”

The Wildcats’ offense managed to push the pigskin all the way down to the Dragons’ 35-yard line in the final minute of the first half. An offensive pass interference call, however, squeezed Woodland out of field goal range and the Wildcats had to settle on a punt.

Late in the third quarter Woodland managed to force a defensive turnover, with Zach Wiggins picking up a loose ball to put the Wildcats’ offense in business at the Pepperell 38-yard line.

The Dragons’ defense, however, would record a turnover of their own, as Rogers recovered a Woodland fumble around the Pepperell 30-yard line.

With about ten minutes remaining in the fourth quarter, the Wildcats stared down a fourth down around the team’s own 25-yard line.

Woodland opted to punt the pigskin away in lieu of taking any gambles on offense.

“Tonight I saw us take a step back and we’ve got to continue to move forward,” Haywood said.

Rogers more or less drove the dagger through the Wildcats heart with a thunderous 68-yard touchdown run with about eight minutes remaining in regulation.

That made it 28-0, all Pepperell — which would stand as the final score.

“I just challenge my team to go ahead and hit the reset button,” Haywood said. “We’re off next week, so we’ve got time to rest, time to recuperate, get some people back from injuries.”

The Wildcats will take next week off and will return to the gridiron on Sept. 23 for an away game against Osborne.

“We’ve got to personnel it right, we’ve got to continue to find the right 11,” Haywood said. “We’ve got to play with a lot of heart and a lot of effort, that’s what it comes down to. Defensively, I think we’ve got a pretty good scheme in place, it’s just tonight, we were misaligned on some of the plays and they were hitting us.”

From here, Haywood said the team is headed back to the proverbial drawing board.

“We’re going to find some things that work for us, we’ve got to find what we do well,” he said. “We’ve got to slow it down in practice, do more mental things, more visual things so we understand offensively our correct pocket assignments, our correct progressions on our passes.”

“Make sure they comprehend and understand the full scheme of it all and how we make it piece together,” Haywood said. “We’ve got to back up a little bit, take some breaks and just heal our bodies, and work more on our minds than anything.”