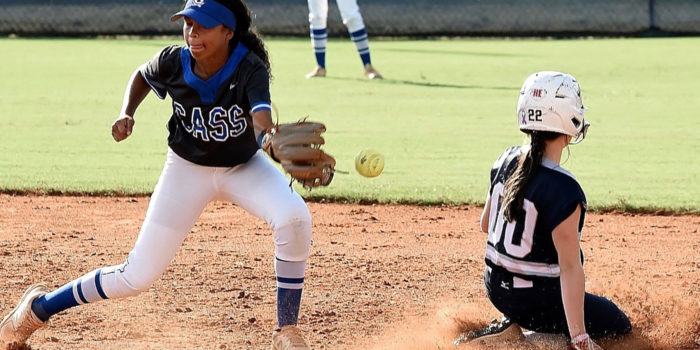 OK, technically, it was the same Lainey Baker, but anyone who witnessed both matchups could tell there were two different versions of the Woodland ace.

The version that pitched against Cass the first time around back on Aug. 18 clearly wasn’t fully healthy. In Game 1 of a Region 7-5A doubleheader that day, Baker allowed nine runs and didn’t even attempt to bat.

The version that entered the circle in Thursday’s rematch, with the best-of-three series even at 1-apiece, looked like the 2019 and 2020 iteration of Baker — The Daily Tribune News Pitcher of the Year each of those two seasons. She gave up no earned runs and canceled out the pair of unearned runs she allowed with a two-run homer, part of a 3-for-4 day at the plate.

After Thursday’s 9-2 triumph, it’s safe to say that the old, dominant version of Baker has returned.

“She’s just a competitor,” Woodland head coach Matt Montgomery said of Baker. “She’s just going to go out there and give everything she has. …

“Maybe her last chance to pitch against Cass and a lot of girls she grew up playing. You give her the ball, put her in the circle and see where it goes.”

Baker flashed her return to greatness last week at Hiram. In a 12-1 win, the senior threw a no-hitter, while finishing 3-for-3 at the dish with a walk, a double and two homers.

“She hasn’t been able to swing or hit all summer, since March, really,” Montgomery said of Baker. “We were going into this not really knowing if that was going to be an option for her or how bad her injury was.”

However, Cass (4-5, 2-4) served as a much better barometer for Baker, especially with the Colonels offense coming off a massive performance in a 12-11 win over Calhoun.

The early returns were a bit of a mixed bag.

Baker walked a batter in each of the first two innings but worked around them. In the third, she allowed the two unearned runs, as the Woodland defense made three errors in the frame, to tie the score at 2-2.

Over the final four innings, the right-hander gave up three hits. All four hits Baker permitted were singles — including two by Saydee Najarro, who also drew a walk. Baker wound up with nine strikeouts against just the two early walks.

“She’s a great pitcher,” Cass head coach Taylor Washington said of Baker. “She keeps us off balance. We should have made more adjustments, but hats off to her, she’s a really good pitcher.”

Offensively, Baker opened the scoring in the bottom of the first. She came up with the bases loaded and one out, driving in the first run with a sharp grounder to third base. Jessica Ryan followed with the first of two sacrifice flies that she would record on the day.

In fact, Ryan was the only Wildcats batter without a hit. Jordan Hammonds, Cassie Jones, Michiah Hicks, Dylynn Motes and Alana Carnes each posted two hits.

“‘How you take these days inside [the hitting facility] is going to determine how we go forward,'” Montgomery said of his message to the team recently. “It’s a testament to them getting in there and getting to work when we can’t get on the field and things are out of our control. Big kudos to the girls for getting in there and working, and it showed up today.”

Motes, who went 2-for-2 with a pair of walks, broke the 2-all tie with an RBI single in the home half of the third. She scored the fourth run in the fifth frame on Ryan’s second sac fly before Cambrie Carrington singled in a run. Later in the inning, Hammonds and Jones recorded back-to-back RBI hits to give Woodland (3-7-1, 3-4) a 7-2 lead.

“We just have to cut out that big inning in the fifth,” Washington said of the difference in the game. “Lainey is too good of a pitcher to get that far behind, and then try to come back in the seventh.”

Following a leadoff walk to Motes in the sixth, Baker hammered a 3-0 pitch beyond the left-field fence to set the final margin. It wasn’t until that moment that Montgomery finally breathed a little easier.

Similarly, the first-year head coach isn’t going to relax now that his team is playing better and will have the luxury of hosting six of its eight remaining region contests.

“You can’t get too far ahead of yourself,” Montgomery said. “It’s 7-2, and I’m still on pins and needles. When you play somebody that can hit the ball like Cass can, they can get back into a game in a heartbeat.

“We have to treat the region the same way. … We’ve put ourselves in a situation where we can’t really start looking ahead too much.”

As for the Colonels, they will hope that getting back onto a regular schedule, beginning with a home doubleheader next Thursday against Blessed Trinity, helps lead to the consistency Washington and Co. have been seeking. At the very least, Cass can take solace in knowing that it won’t have to face Baker in a region game ever again.

“We just have to put everything together,” Washington said. “It’s not one big thing that keeps happening. It’s the little things adding up. We just have to figure it out, put it together and compete with these good teams. …

“I think we can compete with anybody in this region. We just have to put it all together, and I think we will.”