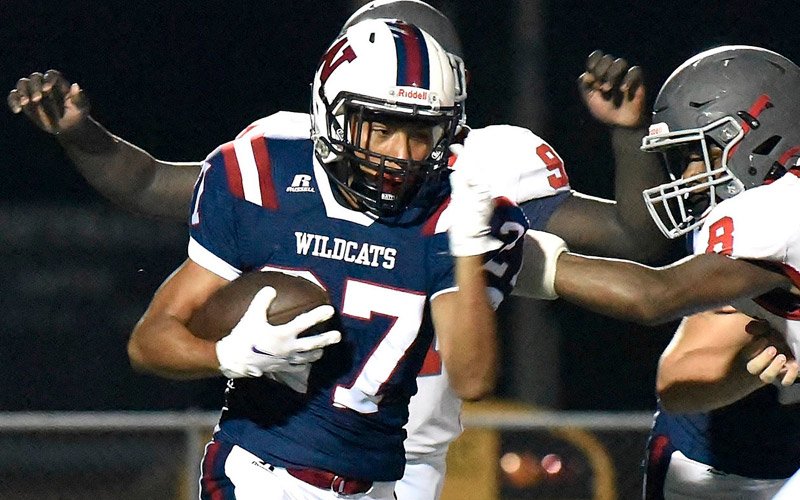 STAFF REPORT
For the second consecutive game, the Woodland High football team put up a crooked number on offense and blew out an overmatched opponent, this time against North Springs Friday on the road, resulting in a 50-9 win.

Woodland, now 3-0 to begin the season, has scored a combined 93 points in its last two games.

“We’ve handled adversity well, worked hard every day in practice, come to work each day,” Woodland head coach Tony Plott said of his team’s fast start to the year. “It’s fun. Our kids are having a good time; they’re having fun. It’s fun to be around them.”

As has been mostly the case to start the season, the Wildcats were paced by senior quarterback Johnathan Thomas and junior running back Asa James on offense.

The duo connected for the first score of the game just 2 1/2 minutes in on a 22-yard touchdown pass.

Woodland got a field goal to take a 10-0 lead, but North Springs returned the kickoff for a touchdown to make it 10-7 with about four minutes left in the first quarter.

However, although North Springs had a glimmer of hope at that point, a 12-minute and 28-second span between the 32-second mark of the first quarter and halftime saw Woodland score 34 unanswered points to turn the game into a rout.

The offensive onslaught began right before the end of the first quarter on Thomas’ 4-yard touchdown run to make the score 17-7. Before the final 32 seconds of the quarter could expire, a North Springs fumble and touchdown return by Zach Good made it 24-7 in favor of the Wildcats.

The next touchdown for Woodland came on Thomas’ 82-yard run, and then another score came quickly on a 38-yard pass from Thomas to James, their second touchdown connection of the game to make it 37-7.

It seemed that would be the halftime score with time waning in the second quarter, but after a North Springs special teams miscue, Woodland capitalized with Thomas on another touchdown pass to James for a 44-7 halftime lead.

“Just [North Springs’] alignment and what they were trying to do,” Plott said of the trio of touchdown connections between Thomas and James. “We had a couple of answers for it.”

With a running clock in the second half, the Wildcats had the game in hand, but a miscue on a punt resulted in a safety to make the score 44-9.

Woodland would get those points back, though, scoring on a 16-yard run by Alejandro Mays to give Woodland a 50-9 lead with 2:37 left in the third quarter.

That would be the last score of the game as Woodland’s defense pitched a shutout with the only scores for North Springs coming on the kickoff return and a safety.

Complementing the defensive performance, the Wildcats reached the 50-point mark for just the second occasion since 2013.

Woodland scored just 120 points all last season, so the 107 points the team has scored in the first three games is a marked improvement for the offense.

“I think we’re better this year,” Plott said when asked if the high-scoring offense to begin the year was a product of a friendlier schedule or his team’s improvement. “I think Johnathon Thomas is better. I think our offensive line is better than it was last year. And, obviously, Asa James is having a monster year, running and catching the ball.”

The Wildcats will look to continue their undefeated start to the year next week against Chamblee.