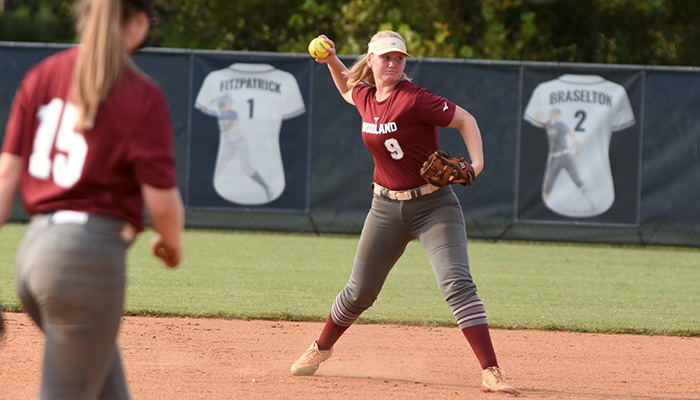 BY NICHOLAS SULLIVAN
Woodland’s Cambrie Carrington blasted a walk-off homer in the first game of a doubleheader and hit a three-run shot in Game 2 that some people thought ended that game, as well.

The junior’s first dinger, which led off the seventh inning of Game 1, gave the Wildcats a 5-4 win over Hiram. Woodland completed the Region 7-5A home sweep with a 16-4 triumph in four frames, with Carrington’s blast giving her side an 11-run cushion and leading a few individuals to prematurely head off the field.

“Have a day, kid,” Wildcats head coach Matt Montgomery said of Carrington. “That was impressive to watch. It’s good for her, because she’s been struggling a little bit. … She let it get in her head a little bit and was pressing. So this is good for her. Let’s get her back rolling like she was a couple of weeks ago.

“She had the walk-off hit in the first one, and the three-run homer in the second. It’s hard to argue with that.”

While the deep drives to left field served as her only hits of the day, Carrington still managed to spend a significant portion of the doubleheader on the bases.

In the opener, Carrington reached on a hit by pitch and on an error, scoring twice overall. The standout shortstop walked twice in Game 2 and scored three times, including the go-ahead run in the bottom of the third inning to break a 4-all tie.

After Carrington put Woodland ahead 5-4 for the second time Thursday, the Wildcats tacked on two more runs in the frame before a nine-run eruption in the fourth ended the nightcap early.

“You’ve got to give a lot of credit to those girls and their coaching staff,” Montgomery said of the Hornets. “They just don’t give up. They play hard and get everything they possibly can out of the talent. It speaks to their character.”

Hiram’s record now sits at 1-13 and 0-10 in the region, but the Hornets certainly didn’t play like a team closing in on a second straight winless region campaign.

The visitors from Paulding County carried a 3-2 lead into the bottom of the sixth inning of Game 1.

With one out, Woodland (10-10-2, 7-5) strung together four consecutive singles. The latter two were RBI hits by Cassie Jones and Lainey Baker to put the Wildcats in position to close out the win.

However, Hiram refused to go away, tying the game with two outs in the seventh. Moments later, though, Carrington would break the Hornets’ hearts with her solo bomb.

“We didn’t get a lot of breaks, but we didn’t make some either,” Montgomery said of the opener. “We shot ourselves in the foot a few times, and they capitalized. They gave us all we wanted.”

Woodland seemed to carry the momentum into the second game, especially with Hiram starting the same pitcher, Arizona Jones, in both contests. The Wildcats jumped out to a 3-0 lead, but the Hornets fought back to even the score by the top of the third.

At that point, Hiram finally changed pitchers, and it was all Woodland from there.

“It took us a little bit longer than I feel comfortable with, but we made that adjustment,” Montgomery said. “Every season, you have to survive those games. Everybody is going to have those. …

“We told them after the first game, ‘We were lucky enough that we pulled that out. Use that as a lesson.'”

With Baker, Woodland’s ace, earning the night off from pitching duties, Peyton Dorn and Cassie Jones each tossed a complete game for the Wildcats.

Despite giving up 17 total hits, the pair didn’t walk a batter and combined to strike out five. Each gave up just one earned run, as both of Hiram’s three-run frames were aided by defensive miscues.

“They’ve pitched a lot of big games,” Montgomery said of the duo. “Cassie Jones pitched a game in the third round of the playoffs last year, so it’s not like the moment is going to be too big for her. …

“Peyton may not have had her best stuff today, but she battled through it. She pitched well enough for us to win, and we did, barely.”

The wins still count the same in the region standings, where the Wildcats currently check in at third in the six-team league.

Woodland’s three remaining region games are all against fourth-place Cartersville, who saw its scheduled region doubleheader Thursday at Blessed Trinity postponed. Despite currently being in playoff position, neither the Wildcats nor the Canes have locked up a berth, as their other rival, Cass, lurks in fifth place.

Following a 1-4 start to region play, Woodland faced an uphill battle, but wins in six of their past seven league games have the Wildcats on the precipice of landing a sixth straight state playoff berth.

“It’s going to be big, but it will be fun against a crosstown rival,” Montgomery said of the upcoming series, which begins next Thursday. “We’ll get to decide our own fate, both teams. That’s really all you can ask for.

“We put ourselves in a situation early in the season where we had to fight ourselves out of a hole. We did, and we’ve got the opportunity to control our own destiny.”