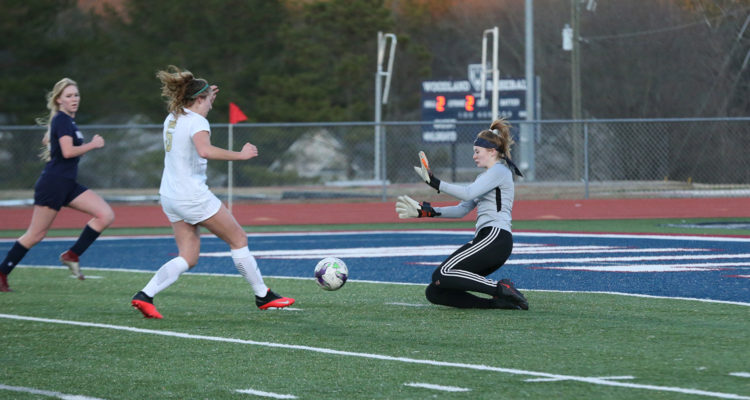 STAFF REPORT
Similarly to the boys soccer season, the girls saw a trio of teams reach the state playoffs.

In this case, Adairsville led the way, cruising through the regular season (winning 12 straight games at one point) en route to the Region 6-AAA championship. The Tigers dropped their final two games, including an opening-round match against North Hall in the Class 3A playoffs, following an injury to The Daily Tribune News Player of the Year Cat Wheeler.

Even still, it was a historic season for Adairsville, which will look to repeat the success next season despite the graduation of Wheeler and four other senior first-team all-county selections.

In Region 7-AAAAA, Cartersville landed the No. 3 spot, while Cass earned the fourth seed with a home win over Woodland in the final regular-season game. The Canes and Colonels, though, dropped road contests in the first round of the 5A playoffs.

PLAYER OF THE YEAR
Cat Wheeler, Adairsville senior
A lot changed between the most recent DTN all-county team, which came out following the 2019 season, and this year’s edition. One thing that didn’t change was that Wheeler remained the best player in Bartow County. After scoring 28 goals in her sophomore season, the Young Harris signee found the back of the net 25 times in 2021. Wheeler also proved to be an unselfish teammate in the attacking third of the field, dishing out a dozen assists. Unfortunately, the dynamic forward suffered an injury in Adairsville’s regular-season finale. Her absence in the Tigers’ postseason match left Adairsville lacking a standout attacking option up front. Even still, Wheeler finished her illustrious career with a total of 65 goals and 25 assists.

ALL-COUNTY
Kendyl Anderson, Cartersville senior — Among the most improved players over the past couple of seasons, Anderson emerged as a key cog in the Cartersville midfield this season. Anderson’s consistency allowed her to record a team-high six assists and contribute eight goals — second-most on the Canes.

Abbey Craig, Cartersville junior — The midfielder’s raw stats of seven goals and five assists were remarkable by themselves. Context, though, makes her achievement even more impressive, as Craig unfortunately was forced to miss roughly half of Cartersville’s games due to COVID-19 quarantine.

Tiera Feanny, Woodland senior — A standout since her freshman season, Feanny once again spearheaded the Wildcats offense this year. The speedy forward earned second-team all-region honors. While Woodland will bring back most of its key contributors, replacing Feanny will prove challenging.

Megan Hardin, Adairsville junior — An extremely versatile player, Hardin, who typically played as a holding midfielder, totaled 12 goals and eight assists. As the only Adairsville all-county pick set to return, Hardin will need to be the Tigers’ main catalyst next season in hopes of repeating as region champions.

Yecenia Hernandez, Cass senior — The Colonels goalkeeper kept her team in most games. She stepped up down the stretch, playing with a broken finger in the final three games. That stretch included the win over Woodland to reach the playoffs and the state tourney match, in which Hernandez posted 38 saves.

Devondria Johnson, Cartersville senior — Johnson was Cartersville’s top defensive player and arguably the best defender in the county. A first-team all-region selection alongside Anderson, Johnson will be irreplaceable. She even chipped in offensively, scoring two goals and providing four assists.

Sadye Johnson, Adairsville senior — Johnson brought the hard-nosed determination that saw her earn a softball scholarship to North Georgia onto the soccer field, and it made her a warrior in the center of the pitch. The attacking midfielder contributed to 30 goals, scoring 17 times to go along with 13 assists.

Ellie McBride, Adairsville senior — An absolute rock in the middle of the Tigers defense, McBride brought a versatile skill set and unparalleled leadership to her center back position. Her ability to snuff out threats led to several shutouts, and her ability to kickstart attacks allowed McBride to compile six assists.

Lillie McBride, Adairsville senior — The other McBride proved to be a well-oiled machine in the middle of the field, with the motor to make game-changing plays in the final minutes. The talented midfielder recorded seven goals and four assists this season en route to garnering all-region selection.

Chloe Ravish, Woodland junior — Ravish had one of the toughest tasks in the county, as the junior goalkeeper looked to keep strong offensive teams like Blessed Trinity, Calhoun, Cartersville and Cass off the board. She exceeded expectations to land goalkeeper of the year selection in the loaded region.

Taylor Rhoades, Adairsville senior — Over the course of her Tigers career, few players contributed in more areas than Rhoades. As a senior, she stepped up at striker, leading the team during a crucial stretch of region games that saw several key players miss time due to coronavirus quarantine protocols.

Madison Shook, Cass senior — Shook earned a spot on the 2019 all-county team after bursting onto the scene as a sophomore. This season, she became a true offensive force. Known mostly for her pinpoint passing entering the year, the center midfielder finished as the leading scorer for the Colonels.

Leidi Toribio, Cass senior — A strong option at the top of the Cass attack, Toribio became more of a facilitator her senior year. Perhaps due to increased focus from opposing defenses, Toribio moved around the offensive front, making plays across the field en route to pacing the Colonels in assists.

Hattie Williams, Cartersville freshman — Considering she’s the only freshman or sophomore on the all-county team, it wouldn’t seem to be a stretch to call Williams the top young player in the county. In her first year at the varsity level, Williams paced the Canes with a dozen goals and added a pair of assists.