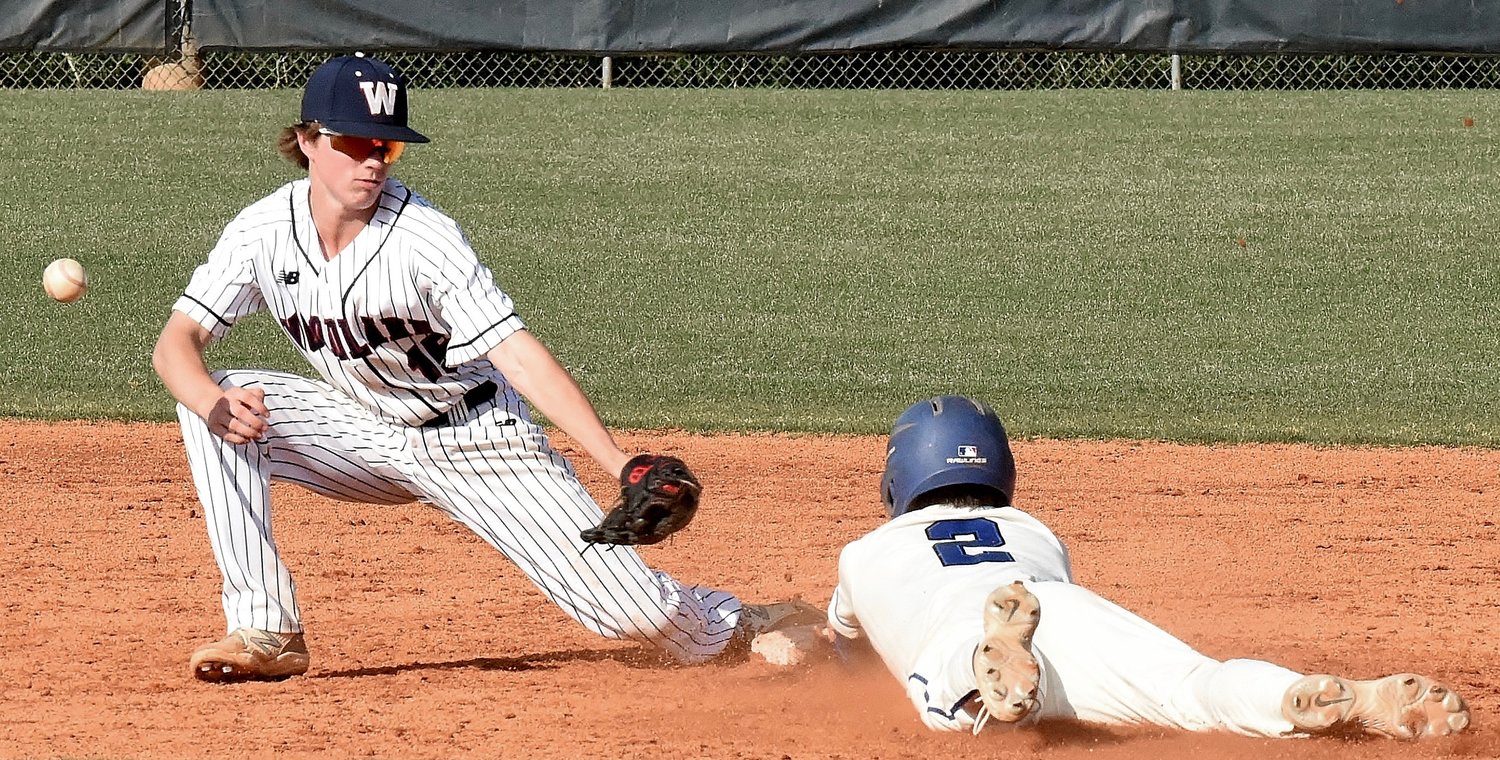 BY NICHOLAS SULLIVAN
Woodland’s Chase Carson briefly exited the Wildcats’ biggest game of the season after rolling his ankle hustling down the first-base line in an attempt to beat out a grounder.

The junior was called out on the bang-bang play at first. But after taking the next half-inning off defensively, Carson returned, and his speed — even slightly compromised — wound up providing the difference for Woodland in a 3-2 victory over Cass.

Hosting the Colonels in an April 21 doubleheader with a berth in the Class 5A state playoffs on the line, the Wildcats broke a 2-all tie in the home half of the seventh.

Carson reached on a one-out single and moved to second when the ensuing pitch bounced in the dirt. Cass, which needed to sweep the two games to get into the playoffs, elected to intentionally walk Julian Wright.

With Jakiyon Porter at the plate, Carson took off for third, easily swiping the bag. Wright went with a delayed steal, looking to potentially draw a throw but to no avail. On a 2-1 pitch, Porter chopped a ball directly to the drawn-in shortstop, but Carson slid in safely to set off a celebration more than a decade in the making.

“Just a really savvy play that we felt like the pitcher wasn’t really paying attention to him, and he took third,” Wildcats head coach Matt Montgomery said of Carson. “It put us in position that a pretty good pitch and a chopped ball to an infielder was enough. He got a good read, a good jump. He was a little gimpy.

“All you can ask for is a play at the plate there to walk off and go to the state playoffs for the first time in 10 years. Pretty storybook there.”

Based on results from MaxPreps, Woodland last reached the state tournament in 2011.

The Wildcats have been incredibly close to ending the drought in recent years. Removing the pandemic-shortened 2020 campaign, Woodland finished fifth in Region 7-5A each of the past five years.

This time, the Wildcats secured the No. 4 seed in a region that includes three perennial powerhouses in Cartersville, Blessed Trinity and Calhoun.

“It’s nice to break through,” Montgomery said. “It’s just great to get in. We’ve talked about it from the beginning that every game matters. There’s always four or five plays that end up winning or losing a game. You just don’t know which four or five they are. We’ve seen season by season that one game can cost you and decide whether you are turning in uniforms or get to play in the postseason.”

Despite Montgomery’s emphasis on the importance of every game, in winning the opener of the twin bill, Woodland ensured that the result of the nightcap wouldn’t matter. Even still, the Wildcats jumped out early and cruised to a 13-6 win.

In a long, sometimes sloppy, regular-season finale, both teams emptied out their benches. Multiple changes to the batting order and fielding positions seemed to occur each inning. A dozen players wound up pitching, including all three of Woodland’s seniors in likely their final home game.

With only five combined seniors, each side got the chance to see several young players get opportunities to contribute across the diamond.

“Obviously, I wish we wouldn’t have been in that situation,” Cass head coach Matt Thompson said about playing Game 3 with nothing on the line. “It was good to get them in to hopefully build some positivity heading into the summer. …

“The feeling after the first game was awful. Nobody was really happy at all. Hopefully, we can use that to keep ourselves motivated as we come into our summer work and our fall work, trying to get to that spot where we are celebrating at this time next year getting into the playoffs.”

Without Carson dashing around the bases, the second game of the doubleheader could have played out much differently in a winner-take-all scenario.

Thompson didn’t seem to regret his decision to intentionally put Wright on base. Instead, the first-year head coach credited Woodland for the guts needed to execute in that moment.

“We tried to get the force play somewhere or maybe a double play,” Thompson said. “He pulled that double steal. It was a pretty bold move by him, but it worked out. We pulled the infield in, and they hit it to the guy we wanted them to. It was hit just slow enough that he managed to get there under the tag. Kudos to them for getting it done, being bold and going for it.”

Cass, which edged out Woodland on a tiebreaker for the fourth seed last year, held a brief 2-1 lead in the sixth inning. Senior Bentley Markley turned a one-run deficit into a one-run lead when he launched a two-run homer to left field following a leadoff walk to Aidan Larkin.

“That was great,” Thompson said. “He had been scuffling a little bit, but he just keeps swinging. For him, I think, it was his first high school home run. To come through right there was huge. It just shows that they never give up. It’s one of the things that makes me proud of them.”

The lead proved to be short-lived, as Ayden Ray led off the bottom of the frame with a solo homer to right field. Ray also drove in the Wildcats’ first run, slicing a two-out single down the left-field line on an 0-2 pitch.

That clutch single scored Wright, who had been hit by a pitch, way back in the first inning. It allowed Woodland’s Hunter Shirley to pitch most of his six frames with a slim lead.

Despite his only true blemish being the Markley home run, Shirley needed to escape trouble in every inning but the second. In six of the seven frames, the Colonels managed to put the leadoff hitter on base.

Connor Stermer coaxed a double play, turned nicely by Mason Williams, to eliminate the threat in the seventh en route to the win. Shirley, meanwhile, pitched his best game in weeks, striking out five against just two walks and four hits.

“Shirley did a really good job coming in today and throwing strikes,” Montgomery said. “It’s something he’s been working on really hard. He’s had a couple of outings where he threw a lot of pitches, his pitch count went up and he didn’t go deep in games like he wanted to. Still probably walked too many for my liking, but it’s an improvement. When he’s around the zone, throwing it in there and attacking hitters, he can be really effective.”

Carson, Ray and Stermer posted two hits apiece, but those were the only knocks given up by Cass’ Cayden Roberts and Hayden Cole. Like Shirley, Roberts allowed four hits and two walks, albeit in five innings, but left in line for the win.

“We didn’t expect him to get this many varsity innings,” Thompson said of Roberts, a sophomore. “We knew he would throw some. But for him to come out and be a legit No. 2 [starter], nobody scored many runs off him in the region. He really came in and stepped up big time for us. …

“He’ll be a big piece for us going forward. Glad we have two more years of him to see how he keeps growing and developing.”

While the second game proved to be about rewarding players for their hard work — be it seniors in their final regular-season game or those who typically settle for bench roles — it wound up being some of the usual suspects leading their respective offenses.

Larkin and Woodland’s Rowan Billings led their teams with two hits apiece. Billings and Wildcats senior Jacob Gravett each drove in a game-high three runs, with the latter’s RBIs all coming on a bases-clearing hit during a seven-run second inning.

With a state playoff series beginning at 4:30 p.m. April 27 at Region 5-5A champion St. Pius X, Woodland will need to carry over the positive energy.

If they are able to do so, it’s possible the Wildcats could go on a postseason run the way Montgomery’s softball team did in the fall. Woodland softball’s journey to a fourth-place finish in the state also began with a best-of-three series at St. Pius.

“Some young guys did a really good job when they got chances,” Montgomery said of the final regular-season game. “They got some hits and made some plays. We got a few pitchers some work and got to honor the seniors by letting them get on the mound a little bit.

“It was nice to let the guys let loose a little bit and have a little more fun than I usually let them before we have to go back and tighten the screws next week.”