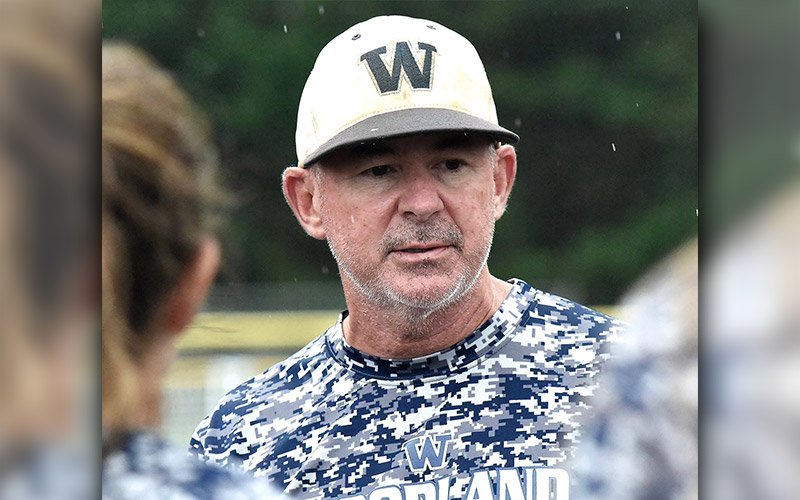 BY NICHOLAS SULLIVAN
Rain started to pour down Wednesday, as the Woodland softball team gathered for its final postgame meeting of the season. But the precipitation couldn’t mask the tears welling up in the eyes of several players.

Having just fallen to Jones County in an elimination game in the Class 5A state playoffs, the Wildcats were in a somber mood, befitting of the weather — which had forced the game to be moved to a turf field at Hamilton Crossing Park.

Woodland (25-11) had reached the Elite Eight to match the program’s 2004 squad for the deepest playoff run ever. However, securing their spot in history likely wasn’t on their collective minds after dropping Game 3 of the state quarterfinal series by a 10-1 final score.

“I told them, one game doesn’t say what they’ve done this year,” Wildcats head coach Colman Roberts said. “We’re going to end the season one way or another, and it’s always hard, especially for the seniors. Probably the best senior class we’ve ever had here — went to the playoffs every year, Sweet 16s and Elite Eight this year. …

“I’m proud of them. I told them, ‘It’s hard to say goodbye to something you love.'”

While the players were certainly sad to say goodbye to the season, they also had the added difficulty of bidding farewell to Roberts. The 18-year head coach announced his retirement after the game.

“I’ve been thinking about it,” Roberts said. “I’m definitely not getting any younger. … Thirty-one years [of teaching] is long enough to me. I’m going to try to do some things and try to enjoy my retirement.

“I still have fire in me; I still love the game; and I love the kids in that building, especially. It’s going to be tough.”

Roberts, who will be retiring from teaching at the end of the school year, finishes his career with a 390-254 record. His teams made it to the state playoffs 13 times, reached the Sweet 16 five times and advanced to the Elite Eight twice, including this year.

“I have coached with coach Roberts for 18 years,” Woodland athletic director John Howard said. “He has coached golf, boys basketball, girls basketball, baseball and softball while I’ve been at Woodland.

“Coach Roberts is the epitome of how I think Woodland athletics should be represented. He is knowledgeable, demands a lot out of his players, but most importantly, cares for each of his players and has always built relationships that carry over even after they graduate. Coach Roberts has built traditions that will last long after he retires.

“He will always be part of the Wildcat family.”

While Roberts would have been hoping to have his career come to a close during the Final Four this weekend in Columbus, he believes the future of the program remains bright.

“I’m proud of them for making it as far as we did,” Roberts said. “They’ll be good next year. We’ve got some young kids from middle school. The four we lose will be tough, but they’ll be OK.”

Lainey Baker went the distance in the circle for Woodland Wednesday. After taking the loss in a 5-0 defeat in Tuesday’s opener, the right-hander earned the win in relief in Game 2 to set up the winner-take-all scenario.

Baker gave up 10 hits, including a pair of home runs to Jones County pitcher Destin Howard, and three walks. Half of the runs she allowed were earned, as the Greyhounds (26-12) broke the game open with five unearned runs in the fifth inning.

Hicks drove in the lone Woodland run, singling home pinch runner Taylor Adcock in the third, to briefly give the Wildcats a 1-0 lead.

Howard’s first homer — a two-run blast to right field — gave Jones County a slim lead in the fourth inning before she punctuated the fifth-inning outburst with a deep drive out to left-center field for three more runs and a 7-1 advantage.

The Greyhounds tacked on three more runs in the top of the seventh to help secure the win and a date with Starr’s Mill in the first round of the double-elimination tournament, which will also include Apalachee and Whitewater, set to begin Friday at Columbus Softball Complex.

“It’s a tough way to go out,” Roberts admitted.

Woodland — which saw Miller and Lainey Baker each finish 1-for-2 with a walk — will enter next season with a new head coach for the first time since Roberts took over in 2003. Considering the historic nature of his swan song, he seems to be leaving the program in a healthy state for whomever succeeds him.

“I told them, it’s not about me anyway,” Roberts said. “It’s about them and how hard they play. I try to push them. I hope I pushed them; I hope I helped them. … I hope I taught them about life, how things are tough and how to overcome tough times.

“They’ll do good, and those four seniors will be successful in whatever they choose to do.”