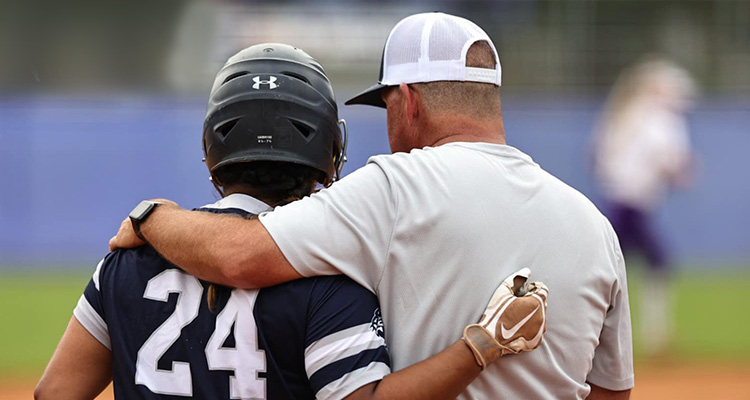 BY SCOTT POWER
It was a big night for Woodland freshman Haley Collum.

Collum pitched a one-hit shutout and also hit a home run on Aug. 18 as the Lady Wildcats blanked Hiram on the road.

“Haley threw a shutout and she also hit a home run so she was the total package tonight,” Woodland Coach Todd Eubanks said.

After suffering a lopsided loss to Calhoun in the previous game, Eubanks was happy to see his team fight back.

“After being sloppy the other night we only committed one error tonight,” Eubanks said. “Other than that (one error) we were perfect. It was a good bounce-back win for us.”

Collum pitched in that game against Calhoun and while that wasn’t a fun experience, she learned from it.

“I knew I had to locate my pitches and keep them low,” Collum said of her thoughts going into the game versus Hiram. “It felt good to get the shutout, especially after Tuesday.”

The Lady Wildcats traveled to Buford High School to take part in a tournament against Cambridge and Buford on Aug. 20, defeating Cambridge and falling to Buford 12 in four innings.

Against Hiram, Cambrie Carrington led off Woodland’s half of the second inning with a double and advanced to third on a fielder’s choice by Elizabeth Hartsfield. After the second out Alana Carnes reached on an error, which brought home Carrington.

Woodland’s expanded its 1-0 lead with four more runs in the fourth. Kamryn Smith, another freshman, led off the inning with a double before leaving for courtesy runner Lanie Calhoun.

Carrington’s bunt single advanced Calhoun to third. Hartsfield drove in a run with a single to make it 2-0. Carrington and courtesy runner Ella Wallingford then crossed home plate after a triple by Bailey Sakacsi and the Lady Wildcats went ahead 4-0.

The final run of the inning came on a sacrifice fly by Carnes that scored Sakasci.

Collum later made it 7-0 in the fifth inning on a home run blast to center field.
Collum shut down Hiram’s bats, giving up only one hit to earn the shutout win. She struck out seven and walked one in seven innings.

Collum also led the Lady Wildcats at the plate, going 2-for-3 with a homer and an RBI. Carrington went 2-for-3 and scored two runs.

Sakacsi had two RBIs while Hartsfield and Carnes each drove in one run.

Against Cambridge, Woodland opened the scoring in the top of the second inning when Jordan Hammonds doubled home Carrington, who had drew a walk earlier in the inning. Then Peyton Dorn doubled home Sakacsi and Hammonds. Sakasci had also walked.

Cambridge pushed across a pair of runs in the fourth to make it 3-2.

Then came the big inning in the sixth for the Lady Wildcats as they crossed the plate five times to take an 8-2 advantage.

Kamryn Smith hit a one-out single before giving way to pinch runner Ashlyn Baines and Baines advanced on a hit by Carrington. Karmen Zeferino then walked to load the bases, with Bailey Gerstner running for her.

After the second out of the inning Carnes double home Baines and Carrington to make it 5-2. Hamonds then doubled to bring home Gerstner and Carnes.

After a walk by Dorn, Hammonds scored by stealing home.

Cambridge scored three runs in the bottom of the sixth, but Woodland prevented them from making it any closer.

Hammonds went 2-for-3 with three RBIs and scored twice. Nobody else had multiple hits, but Carnes and Dorn each drove in two runs. The Lady Wildcats hit four doubles in the game with Hammonds with two and Collum, Dorn and Carnes each with one.

Baines earned thew in in the circle. She gave up four runs, two of them earned, on seven hits in 5 1/3 innings. She walked two and struck out none. Dorn finished the game, giving up one run on run hit with one walk and one strikeout.

Against Buford, the Lady Wolves controlled the game from the start, including a nine-run second inning. Woodland’s lone hit was a double by Carrington.

Next up for the Lady Wildcats is a game against Cartersville on Aug. 23.