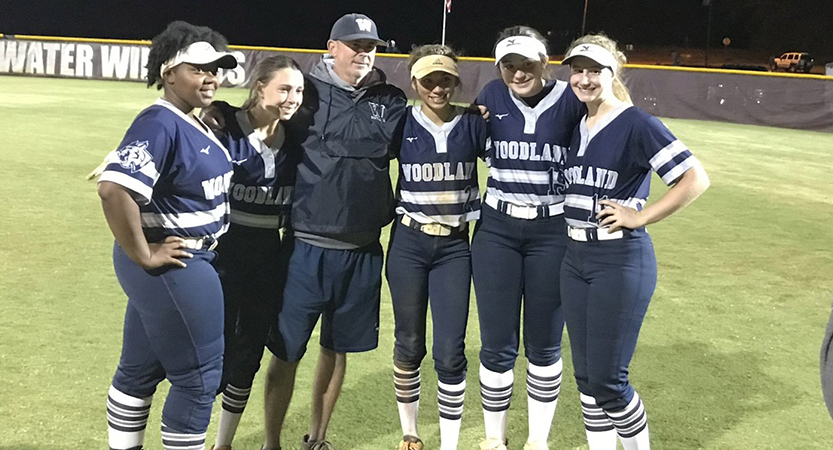 The Woodland Lady Wildcats were in this position before.
Just two wins away from the state softball championship tournament in Columbus in 2016, they faced the Whitewater Lady Wildcats from Region 3-AAAAA.
Unfortunately, the results this year were the same. Woodland was swept in two games and came up just short. However, it doesn’t take the luster off another outstanding season by coach Colman Roberts and his Lady Wildcats.
Prospects looked good for Woodland. Their ace pitcher, Lainey Baker, had been stingy from the circle all season, including an incredible stretch of allowing one run or less since mid-September. Baker was tested right off the bat when Whitewater shortstop Lilly Griffith laced a first inning triple and scored on an Alexis Larrow sacrifice. Unfazed, Baker escaped further damage and pitched around an infield miscue and a walk to keep the game at 1-0.
The softball took a wacky and unfriendly bounce in the top of the second that changed Woodland’s momentum for rest of the evening. Kendyl Hardin led off the inning with a solid single and scored on a double from Morgan Cooper to tie the game. Kailey Baker followed with a single and Woodland had runners on first and third with no outs and looked to give their pitcher some breathing room.
Hannah Miller hit a soft liner to Whitewater’s second baseman who muffed it directly in the direction of first base where Kailey Baker was retreating, and Whitewater completed the improbable double play. The sequence of events took the wind out of Woodland’s sails on offense and Whitewater pitcher Emma Vessel kept the Wildcats off balance through the middle innings with an assortment of screwballs and off-speed pitches.
Lainey Baker was holding serve, as she got a great double play from her defense to get out of the third and had an easy fourth, but the Whitewater offense struck in the fifth for three runs powered by a Larrow home run to left-center.
Woodland would threaten once more in the seventh when they got two runners on to bring the tying run to the plate, but Vessel got a comebacker to the circle to end Game 1 with a 4-1 loss.
Game 2 saw Baker back in the circle to face Whitewater freshman Makalya Coffield. In contrast to the variety of pitches Vessel had shown in the first game, Coffield was more of a power pitcher and presented a new challenge for the Woodland hitters. After Coffield worked out of first inning drama, she locked in for the rest of the night in Whitewater’s 8-2 series clinching game.
Woodland never stopped fighting, as the Wildcats got on the board in the sixth inning on a double by Cooper that drove in Ansley Evans. They followed that in the seventh inning when two seniors in their final game came through; Bella Carnes tripled and scored on Morgan Bailey’s single.
Lainey Baker was a warrior throughout, she kept her team in both games against a versatile Whitewater lineup that hit with power and used speed to its advantage.
Coach Roberts said of his pitcher, “She battled in two games last week against Chamblee and all night tonight. I am very proud of her. She is a sophomore and we have her for two more years.”
Coach Roberts also looked back on a successful run by his senior class.
“They have been to the state tournament four straight years and the Sweet 16 three of those years,” he said. “That is a great accomplishment and I am proud of them. We will come back in the spring and go back to work. Those ladies will be tough to replace, but we will find someone to squeeze into their place.
“It’s a disappointing finish, but we will work hard to get back.”
Woodland finished the year 21-12, their second consecutive 20-win season.