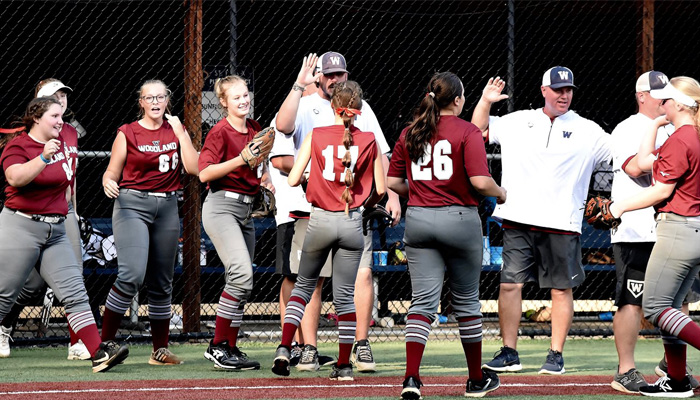 BY NICHOLAS SULLIVAN
The Woodland softball team played 28 games during the regular season, finishing with a .500 record of 13-13-2.

Half of those games were decided by three runs or fewer, including the two ties. The Wildcats wound up 7-5-2 in those 14 games, with the hope being that the challenging contests would prove to be adequate postseason prep.

That seemed to be the case in the opening round of the Class 5A state playoffs, where Woodland swept St. Pius X by final scores of 3-2 and 6-4 Tuesday in DeKalb County.

“At this point, there are no bad teams,” Wildcats head coach Matt Montgomery said. “You’re not going to have a blowout. It’s not going to happen. All you need is to find a way to win. I’m very proud of them for doing that.”

In actuality, third-seeded Woodland and No. 2 seed St. Pius faced off in one of the few even matchups of the classification’s first round.

Of the 16 series, 15 of them resulted in sweeps — most of them rather one-sided affairs, including 20-7 and 12-0 wins by fourth seed Wayne County over region champion Woodward Academy. With that result, the Wildcats will host the Yellow Jackets next week. The winner will advance to the eight-team, double-elimination state tournament in Columbus.

To continue advancing, Woodland (15-13-2) likely will need to increase its offensive production.

“Bats finally came alive a little bit in the second game,” Montgomery said. “We were kind of waiting on that. I think we got a little tight in that first game.”

To be fair, the Wildcats put together a successful two-out rally in the opening inning of Game 1. Michiah Hicks started the push with a single. Dylynn Motes followed with an RBI double, and she came home on a run-scoring hit by Lainey Baker.

St. Pius (18-10) evened the score in the third inning but wound up stranding a pair of runners in the frame. That proved costly, as Baker limited the Golden Lions to just one walk the rest of the way.

Meanwhile, Woodland wasted some key scoring chances before Baker led off the top of the seventh inning with a single. Courtesy runner Bailey Sakacsi stole second base and scored on a double by Jessica Ryan.

In her first pitching outing since tweaking her back on Sept. 23, Baker gave up four hits and three walks to the Region 5-5A runner-up. The senior struck out 11, including punching out the side in the home half of the seventh on just 10 pitches to close out the complete-game win.

“Adrenaline came in during that seventh,” Montgomery said of Baker. “She hadn’t pitched in a long time. … Hopefully, it gave her a little bit more confidence, being healthy and being able to go.”

Knowing his team’s season wouldn’t end Tuesday, Montgomery could safely rest Baker in Game 2, giving Cassie Jones and Peyton Dorn the task of sending the Wildcats to the second round.

Jones struck out four and walked just one. The senior gave up eight hits — five of which came in the sixth inning, when the Lions scored twice to pull within 6-3.

“Cassie was dealing and was cruising through the first five,” Montgomery said. “It feels pretty good having someone like Peyton not having to throw yet, just in case you have to go to a Game 3.”

Dorn came in to pitch the seventh.

The sophomore promptly struck out the leadoff batter, but a dropped third strike allowed the St. Pius runner to reach. A steal and a pair of groundouts pushed the unearned run across the plate.

However, the Lions couldn’t bring the tying run to the plate, as a groundout to shortstop Cambrie Carrington sent the Wildcats to the Sweet 16.

The game-ending play ended up being fairly routine for Carrington. Earlier, though, the junior made a handful of jaw-dropping contributions, one of which included starting a key double play in the sixth after St. Pius opened the inning with three straight hits.

“She made three or four great plays,” Montgomery said of Carrington. “… She’s been solid all year and anchored our defense. Like I said, she made some fantastic plays today.”

As for Dorn, the southpaw needed just 12 pitches to toss her one inning. Even after the dropped third strike, she didn’t seem too fazed.

“You know what you’re going to get out of her,” Montgomery said of Dorn. “Whether it’s the first game of the season or if it was the state championship game — from what she’s done and seeing her in big situations — I have no doubt that she’s going to give everything she’s got every time she goes out there.

“As a coach, you almost forget she’s just a sophomore because of the way she carries herself.”

Offensively, Hicks, Jones, Motes and Ryan each recorded a pair of hits in Game 2.

Motes launched a two-run homer way beyond the left-field fence in the bottom of the first inning for a 2-1 lead. In the second frame, Jordan Hammonds singled home Alana Carnes, and Hicks — who went 3-for-3 in the opener — doubled home Hammonds.

In the fourth, Sakacsi used some heads-up baserunning, scoring on a passed ball, to put Woodland up 5-1. An inning later, Dorn doubled in Carrington to help tack on an insurance run.

It’s the type of balanced offensive attack that has helped the Wildcats turn their season around after starting the year 1-7-1.

That rough opening stretch included a 1-4 mark in region play. The rest of the way, Woodland went 9-1 in the league to finish tied for second in the standings.

Those early struggles, which were due in part to injuries suffered by Baker and Hicks, could have caused some rifts for a program coming off a trip to the state quarterfinals but under a new head coach.

Instead, the Wildcats seem to have grown stronger and closer from that adversity.

“We have a great group of girls who are selfless,” Montgomery said. “When they aren’t the one in the spotlight, they are happy for the other one [who is].