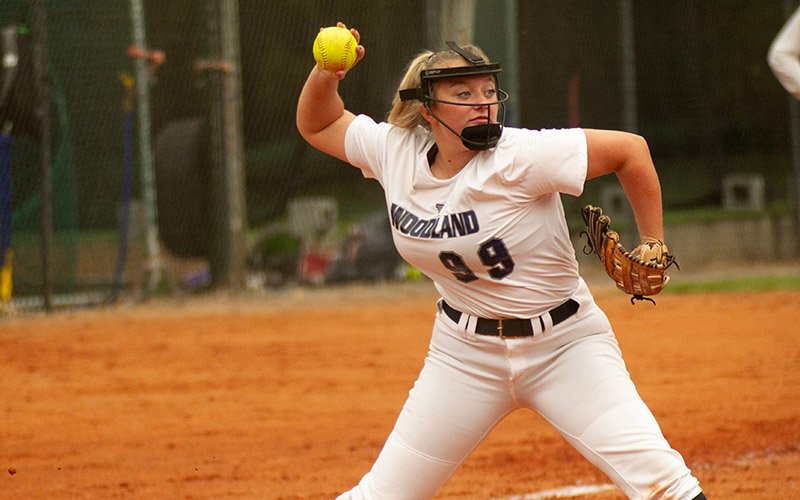 BY NICHOLAS SULLIVAN
Entering Thursday, only one Woodland softball team in school history had reached the Elite Eight. Entering Friday, that exclusive club had doubled in size.

That’s because this season’s iteration joined the 2004 Wildcats in the record books, edging out Greenbrier — 2-1 and 7-5 — in a pair of nail-biting wins Thursday at Woodland. The doubleheader sweep means the Wildcats (24-9) will host Jones County — which downed Northside, Columbus twice Thursday — in the Class 5A state quarterfinals.

“Everybody had a part in it,” said Wildcats head coach Colman Roberts, who also led that 2004 squad. “… That’s how it’s going to have to be the rest of the way. It’s going to get tougher and tougher as it goes.

Roberts touted the contributions of the entire team, as every Woodland starter had at least one hit over the two games. There were, however, a few performances that stood out.

First and foremost, Lainey Baker tossed a pair of complete games. The junior had two gutsy performances, throwing 257 combined pitches over 14 innings. She totaled 17 strikeouts, while walking an uncharacteristically high four batters in each game.

In the opener, Baker gave up just three hits, with the only Greenbrier run coming on a leadoff homer by Megan Steinmeyer. Clearly gassed in Game 2, the right-hander allowed 10 hits — seven of which came over the final three innings as the Wolfpack (17-4) nearly rallied back from a 5-0 deficit.

“She wanted the ball,” Roberts said of Baker’s attitude between games. “I was proud of that. She threw over 200 pitches. That’s unbelievable. The effort she gave for her teammates was unbelievable.

“I always talk about Kailey [Baker, the team’s catcher and Lainey’s sister], too. She calls a great game. … She’s so important to us, too.”

Offensively, Michiah Hicks led the way for the Wildcats, who managed nine hits in each game.

The left-hander hitter finished 3-for-4 in Game 1. Hicks lined an RBI double down the left-field line to score Ansley Evans to tie the game at 1-apiece in the fifth inning. The junior moved to third on a single by Hannah Miller before scoring the go-ahead run on a ground ball double play.

Hicks kept her stellar season going in Game 2, adding two more hits, including a clutch two-run homer to left-center field in the top of the seventh to extend Woodland’s lead to 7-4.

“She’s been hitting all year,” Roberts said of Hicks. “I had a college coach come the other night, looking at her. I said, ‘It’s about time.’

“She can hit; she can run; she’s got a good arm. She’s got all of the tools. Biggest thing is she’s a good kid and she’s good in the classroom.”

Miller and Evans — a pair of seniors — also had huge contributions Thursday.

The team’s starting third baseman, Miller launched a third-inning grand slam to center field on an 0-2 pitch to open the scoring in Game 2.

It marked the third time Millar has homered in four postseason games this year. She had an inside-the-park home run in the first-round opener against Lithia Springs Monday, and the right-handed hitter sent one over the fence in Game 2 that evening.

“Sigh of relief,” Roberts said of how he felt watching Miller’s grand slam clear the fence.

Roberts no doubt had an even bigger sigh of relief after Evans made her most important play of the day. The four-year starter went 1-for-3 with a walk in each game out of the leadoff spot, but the shortstop’s most impactful play came on defense.

With two outs in the seventh inning and the potential tying runs on base, Evans knocked down a hard grounder and fired to first just in time to retire the Greenbrier batter for the final out. Had Evans failed to make the play, one run would have scored, the tying run would have been at second base and Steinmeyer, who also hit a solo homer to get the Wolfpack on the board in Game 2, would have been at the plate.

“It was a hard hit ball. She didn’t get a good handle on it but stayed with it, and she made an accurate throw with a runner with pretty good speed.”

Having completed a pair of home sweeps to open the playoffs, Woodland will hope for one more Tuesday to qualify for the Final Four. If that happens (or if the Wildcats close out the series Wednesday), Roberts and Co. will compete in a double-elimination tournament next weekend in Columbus to determine the 5A champion.

“I think we can do it,” Roberts said of advancing to Columbus. “They’ve got it inside of them. They’re hungry. They come through in the clutch. There’s a thousand things I could say about them.

“I’m proud of them for getting to this point.”