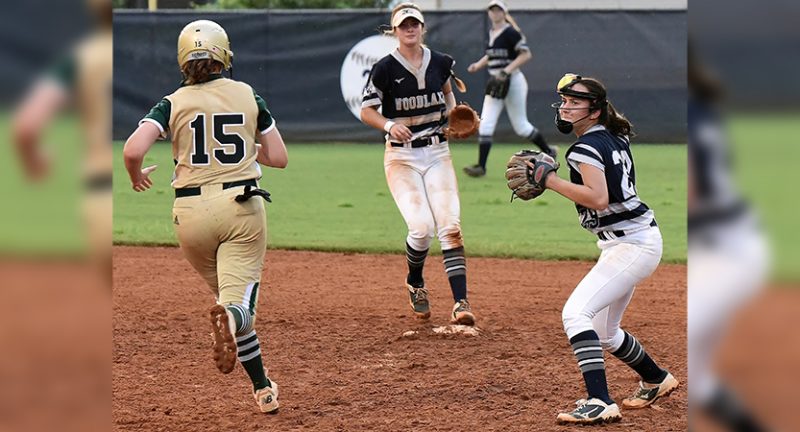 The Wildcats scored seven runs in both games, shutting out the Titans in the first game and allowing just two runs in the second game.

Lainey Baker tossed the shutout in the first game, allowing just three hits, no walks, and striking out a whopping 14 batters.

In the second game, Peyton Dorn got the start and threw four innings, allowing two runs and one earned, before Baker pitched three scoreless to close things out with three strikeouts.

In the opener, Woodland scored two runs in the first inning, but Blessed Trinity stayed in the game until late. The Wildcats scored one run in the fifth on an RBI single by Michiah Hicks to score Morgan Cooper after Cooper’s double. In the sixth inning, an error, a walk, and three consecutive singles scored four runs to put the game away.

In the second game, Woodland fell behind 2-0 after the top of the second inning, but the Wildcats scored seven unanswered, beginning in the bottom of the second with a Dylynn Motes solo home run.

That homer ignited the Wildcats offense, as they scored two more in each of the next two innings. In the third, Hicks singled and scored on Baker’s double. Lainey Baker then scored on Kailey Baker’s single. In the fourth, a couple of errors scored the runs.

Woodland then tacked on two more runs in the sixth inning after Ansley Evans singled, Cooper doubled to score Evans, and Hicks walked before scoring on a Kailey Baker single.

Woodland is now 5-2, 2-2 in region play, and will return to action Thursday at home against Hiram.