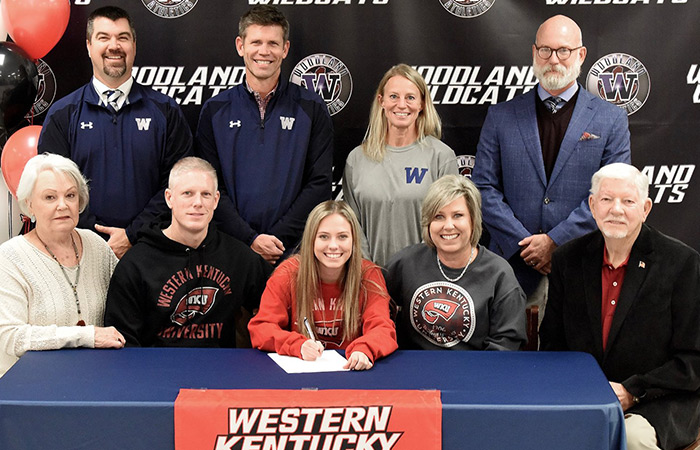 BY NICHOLAS SULLIVAN
On Dec. 4, 2018, then-Woodland freshman Rylee Evans watched her sister, Baylee, sign a national letter of intent to run cross country and track at Troy, hoping she would be following in her footsteps one day.

Almost exactly 3 years later and in the exact same classroom, the younger Evans inked her own NLI to compete at the Division-I level. While she won’t be joining her sister, Rylee Evans is still excited to continue her athletic career at Western Kentucky.

“They just felt like a really connected team,” Evans said of the Hilltoppers following Friday morning’s signing ceremony. “They all were really, really close. It seemed like they really loved the way that the coach was and how he respected them and their boundaries.

“I also felt a connection with them and felt like I would be a good fit with them.”

If Evans is able to form a relationship anywhere close to as strong as she did with her Woodland teammates, then she will be in good company at WKU.

“I’m going to remember my team and how we bonded as a family,” Evans said of what she’ll remember from her time as a Wildcat. “I’m excited to watch them grow when I’m not here. Hopefully, I can come and watch them race without me. They’ve always lifted me up. … They’re a big part of the reason why I’m here.”

In 2018, the Evans sisters helped Woodland win the Class 5A state XC championship, edging out McIntosh in thrilling fashion. The following season, the Wildcats finished runner-up with Evans coming in ninth.

Individually, Rylee Evans put together her best campaign as a junior, placing fourth in the state XC meet. She finished 20th this fall.

“She’s an amazing athlete, and she’s an amazing individual,” said Catherine Bollwerk, who just completed her third season leading the Woodland girls XC team. “She is one that, from Day 1, the target has been on her. There were always the expectations and all of the pressure. She just handled it like a champ. …

“She’s still excited about doing it, and we’re excited to see where she goes from here.”

David Holloway, who coached Evans in track the past three seasons, has seen a transformation in her over the years, especially following the graduation of program mainstays, such as McKenna Trapheagen, Carli Clymer and Cheyenne Spinks.

“It would have been very tempting for her to get down on herself as some of those girls graduated,” Holloway said. “She had to go from having a lot of girls with similar talent to only a few. That’s a difficult situation to be in during a team setting.

“In track, it’s a little bit easier, because all you have is two or three people in a particular event. I think that helps knowing you can still compete at the highest level. … She’s done well transitioning from being a part of a really good team to being the leader of a really good team.”

Bollwerk believes Evans made the seamless move due to the respect she has among her peers.

“Most of the girls, who are running now, ran with her in middle school,” Bollwerk said. “They are familiar with her, and they’ve seen her success. She leads by example if nothing else. She works hard. Her work ethic is incredible. She works in the weight room. She works flexibility. You see her out [training] on the weekends.

“She is just so committed.”

That commitment won’t cease anytime soon, as Evans takes aim at a possible track state title (or two) this spring in the 1600- and 3200-meter races. Then, she will switch gears straight into training for her college schedule, which will add an indoor track season to her docket.

“This summer, I’ll be talking to the coach a lot and be on his training regimen,” Evans said. “I’ll kind of be getting used to the way he coaches and the workouts that he provides.”

Even though Evans clearly put in a lot of time and effort to reach this goal, she credited her sister for helping her get this opportunity.

“She was a great impact on my life,” Evans said. “I think she is most of the reason that I started running in the first place. She’s been a role model for me.”

During an interview at her sister’s signing, Rylee Evans mentioned the possibility of joining Baylee at Troy. It didn’t end up happening, but she cherished the championship-winning season she spent with her older sister and looks forward to making more memories over the years.

“It’s amazing,” Evans said. “The season that we had together will always be a memory of mine. Unfortunately, we’re going to be like 7 hours away from each other. But I’m excited to see where we go in the future.”