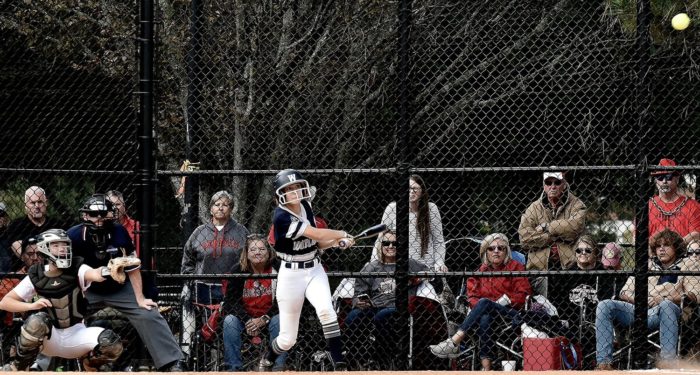 Woodland senior Cassie Jones records a hit against Loganville during the Class 5A state tournament Saturday in Columbus. Randy Parker

As it turned out, the Wildcats didn’t end up winning any, dropping their opener 6-0 to Loganville. Regardless, Woodland still managed to produce the program’s highest-ever placement in the state tourney, finishing fourth in head coach Matt Montgomery’s first year leading the team.

A historic season, no doubt, made even more remarkable by the turnaround the Wildcats (19-15-2) underwent after a 1-7-1 start to the campaign.

“Unbelievable year,” Montgomery said. “… It’s tough when you have a new coach as a senior, much less an entirely new staff, and then you have that start. Normal people would have folded the tent, looked ahead to the next thing and just kind of given up. I told them they’re not normal, as a compliment.

“The toughness they showed and the fight. It’s the same reason we were still here playing on the last day.”

After falling 4-0 to eventual state champion Starr’s Mill in the first round Thursday, Woodland staved off elimination with a pair of victories — 5-4 over Calhoun and 11-0 over Jones County — Friday to reach the Final Four for the first time. In the Wildcats’ only other trip to Columbus in 2004, Woodland went 1-2 to be one of the last six teams left standing.

“It would have been real easy to stay down after that first game against Starr’s Mill,” Montgomery said of bouncing back Friday. “… We came back against a Calhoun team that beat us during the regular season and finished ahead of us in the region. They put them out. Then to come back against the team that put you out last year and is the defending state champion, to do what you did to them in the stadium last night is a microcosm of the whole season.”

After being no-hit by Starr’s Mill ace and North Carolina commit Lilli Backes, Loganville’s Shelby Coffey limited Woodland to just a pair of singles — one each by Michiah Hicks and Cassie Jones. The biggest difference in the two games came from the fact that the Wildcats only struck out three times Saturday as compared to 18 on Thursday.

On the other side, the Red Devils (30-7) took advantage of a couple defensive miscues to score four runs (one earned) in the opening frame. Loganville — which placed third after falling to eventual runner-up Northside, Columbus — held that 4-0 lead until hitting a two-run homer in the fifth to virtually seal the win.

“They did what they had to do,” Montgomery said of the Red Devils. “She threw strikes, was around the plate and kept us off balance. They capitalized on our mistakes. That’s what you do to keep playing today. Any team today is going to need some breaks to continue on and keep going.”

Woodland started sophomore Peyton Dorn in the circle Saturday, marking the first appearance of any pitcher outside of ace Lainey Baker during the tournament. Following the rocky first inning, the left-handed Dorn fired a pair of scoreless frames before Baker came on in relief to pitch to close out the game.

Baker wound up allowing two hits, including the homer, with seven strikeouts. Fittingly, the senior punched out the final batter she faced.

Over the course of four games, Baker racked up 39 strikeouts in 21 innings. She walked six (one intentionally) and gave up 14 hits, with just one of those coming in a five-inning gem against Jones County. Baker did all of that while battling injuries to her back and hip flexor.

“For her to come today and want the ball again, it just shows her guts and how much she cares about her teammates,” Montgomery said of Baker. “She just wants to do everything she can for them.”

Baker and seemingly every one of her teammates unsuccessfully fought back tears in the immediate aftermath of Saturday’s loss. It was evident that Woodland — which entered the tournament ranked No. 14 on MaxPreps, the lowest among 5A qualifiers — wasn’t just happy to be there.

“You can tell by how upset they are — top to bottom — that it matters,” Montgomery said. “There’s a connection. They weren’t out there for themselves. It was all for each other. Otherwise, it wouldn’t hurt so bad.”

Odds are that it’s going to be painful for quite some time, particularly for the seniors who won’t put on a Wildcats softball uniform ever again. But once they get removed far enough from Saturday to reflect fully on everything that took place over the past three months, they will see why Montgomery said, “There’s no doubt that what they have done for Woodland softball will be remembered and will impact us for years to come.”

Speaking of Montgomery, he and his staff will have their work cut out for themselves next season. Former coach Colman Roberts didn’t leave the cupboard bare when he retired at the conclusion of the 2020 campaign, as several key players returned from a team that reached the Elite Eight.

However, looking ahead to next fall, Woodland will now lose Baker’s strong right arm, Hicks’ contact rate, Jones’ versatility, Dylynn Motes’ power stroke and Jessica Ryan’s timely hitting. And that’s just among some of the seniors who started Saturday.

Thus, it will be incumbent upon the returning players to further that legacy in hopes of getting back to the state tournament and finishing on a winning note.

“The example that our senior class set this year about toughness, fighting through and not hanging your head whenever it gets bad,” Montgomery said of what he hopes the underclassmen can take from this season. “Even down to the last out, we were fighting. That kind of impact and never feeling like you’re out [of a game]. And the connections they’re making with the younger ones. That’s what is going to impact our program, and it shows that this is the expectation and not a thing we got to do one time.