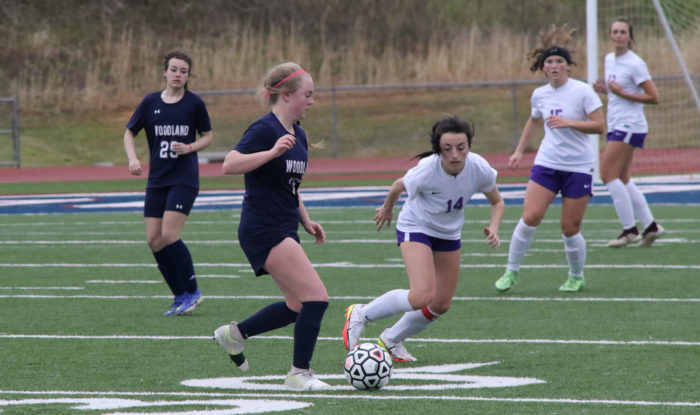 Weightman dominated the early stages, scoring three times within the first 18 minutes. Carlie Forman assisted on two of the goals, as Woodland (6-6-2, 2-3) built a healthy 3-0 lead in pursuit of a postseason berth.

Colonels senior Morgan Tompkins scored with less than five minutes left until halftime off a Dayanara Pineda assist. Tompkins found the back of the net again, this time off a corner kick, midway through the second half to narrow the gap.

With seven minutes remaining, Cass received a golden chance to tie the score from the penalty spot. However, Ravish stepped up for Woodland, diving to her right to keep out the PK.

The Wildcats have a trio of non-region matches scheduled before the Class 5A state playoffs will begin. Even still, No. 4 seed Woodland already knows it will travel to third-ranked Chamblee, the Region 5-5A champion, in the opening round.

Cartersville settles for No. 3 seed

Entering their Region 7-5A finale, the Cartersville girls knew that — win or lose — they would be lined up to face a top-10 ranked team in the first round of the Class 5A state tournament.

However, the draw would have been much easier had the Canes managed to avoid the 2-1 defeat Calhoun handed them March 25 at Weinman Stadium.

With the result, Cartersville (5-9-1, 3-2) finishes as the third seed in the region, and Calhoun captures the No. 2 seed. The Canes will head to fourth-ranked St. Pius X in the opening round, while the Yellow Jackets host No. 8 Decatur.

A successful penalty kick inside the opening minute forced Cartersville to play from behind almost immediately. Calhoun doubled its advantage before halftime.

Abbey Craig assisted Hattie Williams on a goal to cut the deficit in half, but the Canes were unable to equalize.