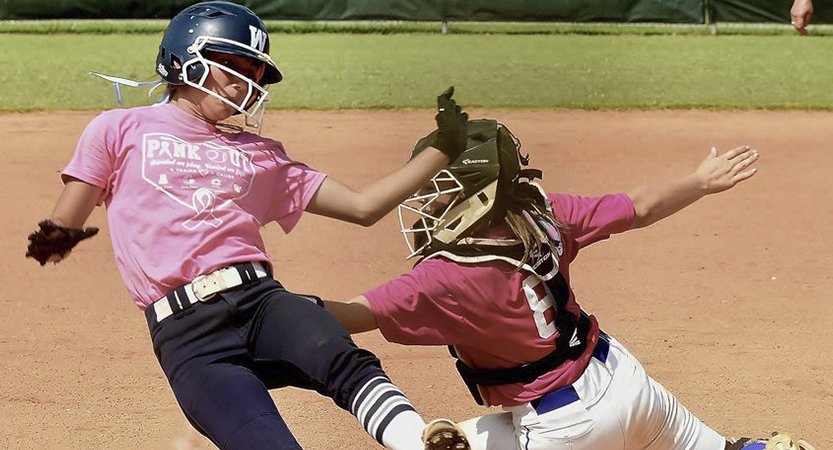 With three starters missing, the Woodland softball team had to rely upon some fairly inexperienced players at key positions in Saturday’s championship game of the Bartow County tournament.

Each of those players stepped up in a major way to help the Wildcats edge out Cass by an 8-5 final score and repeat as county champions in a tournament at Adairsville Middle School.

Center fielder Michiah Hicks, shortstop Cassie Jones and catcher Allyssa Motes were each called upon to play highly important positions in the final. Hicks and Jones were replacing Morgan Cooper and Ansley Evans, respectively, who were at a school function. Meanwhile, Motes filled in for an injured Kailey Baker as the backstop.

“I told the kids, it’s your time to step up,” Woodland head coach Colman Roberts said. “I thought they all played well and all contributed to the win. …

Jones and Motes had two hits apiece in both games Saturday, including a 15-3 rout of Cartersville in the semifinals. Hicks drove in a run in the win over the Canes, but she absolutely erupted in the title tilt. The left-handed hitting sophomore slapped a pair of hits to the opposite field, finishing 2-for-3 with a walk, a run scored and three RBIs.

“She’s going to be a good one,” Roberts said of Hicks. “She works hard. She hits well.

“I thought Allyssa Motes did well behind the plate. She’s caught before but she hadn’t caught all year and having her catch both games was big.”

Lainey Baker went the distance for Woodland (9-5) in the championship game. She wasn’t her usual dominant self, allowing three earned runs on seven hits and three walks, but the right-hander still managed 10 strikeouts with each one seemingly coming in a huge spot.

The Wildcats, who have won seven straight, pushed across single runs in each of the first three innings. Hicks walked with the bases loaded in the first to score Morgan Bailey; Dylynn Motes — the team’s No. 9 hitter — lifted a solo home run over the fence in right-center field; and Hicks drove in Hannah Miller with a single.

Cass (7-7) got a run back in the bottom of the third, when Alexis Woods scampered home on a flyout by Eryn Lee after tripling to begin the inning.

Each team scored three runs in the fifth. For Woodland, Miller scored on a passed ball; Allyssa Motes singled home Hicks; and Kailey Baker, who is able to courtesy run as she deals with a thumb injury, scored on a wild pitch.

Cass, which had lost 11-1 to Woodland last Saturday, answered back to remain in the game.

“It’s very encouraging,” Colonels coach Taylor Weeks said. “Going into the second half of region, that’s what you want is making improvements each game. That’s what we’re doing.”

Woods doubled to open the frame. The freshman stole third and scampered home, as Motes’ throw sailed high. Eryn Lee singled and came around to score on a deep drive into the corner off the bat of Ansley Hight, who launched a three-run homer in a 5-1 semifinal win over Adairsville.

Kylee Hembree, who pitched a complete game for Cass, helped her own cause with a double to score Hight. In the circle, Hembree allowed six earned runs but managed to escape trouble enough times to keep the Colonels within striking distance.

“I told them the whole time, ‘Cass won’t go away,'” Robert said. “They’re scrappy, and they’ve come back in a lot of games.”

The Wildcats, though, answered the challenge. Hicks lofted a sacrifice fly in the top of the sixth to score Jones to push the lead to 7-4, but the Colonels canceled that run out, when Woods drove home Kelly Young with an RBI groundout in the home half.

In the top of the seventh, Dylynn Motes walked, moved to second on a groundout and advanced to third on a passed ball. The sophomore scored on Bailey’s fielder’s choice grounder for a key insurance run.

“She’s got some power; she’s got some pop in her bat,” Roberts said of the younger Motes. “She’s really going to help us out. She’s only in 10th grade.”

After Baker retired the first two batters in the final frame, Cass mounted one of its signature rallies. Saydee Najarro drew a walk before Madison Sheppard was hit by a pitch and Young singled off the outstretched glove of Jones to load the bases.

With the top of the lineup coming up, the Colonels had a chance to steal a win from its rival. But Woods hit a first pitch grounder to third baseman Kendyl Hardin who was judged to have thrown the speedster out on a bang-bang play at first base.

Cass left 11 runners on base, but to be fair, Woodland stranded a dozen. Even still, Roberts was proud of his team’s offensive effort on the day, which included seven batters posting multi-hit games against Cartersville.

The Wildcats will need to keep the bats hot with some incredibly difficult games on tap for next week.

“Our hitting is coming around,” Roberts said. “We were absolutely horrible at the start of the season. We’re coming around. The bottom of the lineup is hitting.

“We have to keep it up, because here we go again with East Paulding and Carrollton back-to-back on Monday and Tuesday. It’s going to be tough, and of course, we have No. 1 Gordon Lee on Friday night in Chattanooga.”

Cartersville finished third with a 9-4 win over Adairsville, which dropped its two games.

While the day didn’t go the way the Tigers would have wanted from a softball standpoint, the day, as a whole, was about more than just the games.

All four teams wore a shade of pink shirts as part of a Pink Out event designed to raise money for a local woman battling breast cancer. All four teams joined the woman on the field prior to the championship game, as she threw out the ceremonial first pitch.

“I thought today went pretty well,” Adairsville head coach Amanda Nelson said, adding her thankfulness to Adairsville Middle for hosting the tournament. “… We had a great showing from our community today.

“It was a Pink Out tournament, and we were able to honor one of our own student’s family and her mother, who is battling breast cancer. The community came together, and we were able to make a generous donation to their family. We’re really proud of that. It’s fun to get out here to play ball, but when you can have a platform that goes beyond softball, that’s really awesome.”

Adairsville jumped ahead but couldn’t hold off a late Cartersville rally in the third place game Saturday afternoon.

The Tigers pushed across a run in the first and two in the third for a 3-0 lead. However, the Canes scored nine straight runs to pull away for a 9-4 win.

A three-run top of the fourth tied the game before a five-run sixth completed the comeback. Each team scored once in the seventh to set the final margin.

Senior Lauren McElhaney, junior Anna Kate McElhaney and senior Cio Seigler each had three hits for the Canes (8-9). The elder McElhaney had two doubles, two runs scored and three RBIs, while the younger one scored once and drove in two. Elizabeth Nelson also had two hits.

Ava Perkins pitched the first three innings, and McKinley Chada threw the final four. They combined to allow eight hits with five strikeouts and no walks.

Alexa Varner and Megan Gregory each finished 2-for-4 to lead Adairsville (6-9). Chloe Souders and Gregory drove in one run apiece, while Sadye Johnson scored twice and Gregory crossed home once.

Woodland scored multiple runs in every inning to blow by Cartersville in the second semifinal of the day.

Morgan Cooper and Hannah Miller each picked up three hits in the dominant 15-3 win. Cooper had four runs scored and two RBIs before having to leave ahead of the championship game for a different school function. Miller walked, scored once and racked up five RBIs.

Bella Carnes, Morgan Bailey, Ansley Evans, Cassie Jones and Allyssa Motes all had two hits apiece for the Wildcats. Evans scored four runs with Carnes and Bailey scoring twice each. Kendyl Hardin had just one hits, but she scored a run and drove home two.

Woodland plated four runs each in the first and second innings before putting up a five-spot in the third. They managed to wrap things up with two more runs in the fourth.

Cartersville scored three runs in the bottom of the first against Hope Schultz on Anna Kate McElhaney’s bases-clearing double. Schultz settled down from there, and kept the Canes at bay the rest of the game.

Ansley Hight opened the Bartow County softball championship with a bang. The freshman’s three-run homer just four batters into the day’s first semifinal was all Cass would need in a 5-1 win over Adairsville.

The top three hitters in the order for the Colonels — Alexis Woods, Eryn Lee and Rachael Lee — each had two hits. Hight’s round-tripper the only other hit for the team.

Cass tacked on single runs in the third and fifth innings.

Rachael Lee pitched phenomenally in the circle. She allowed just five hits and one walk. The sophomore struck out five and only allowed a run in the top of the seventh with her team already up 5-0.

Victoria O’Neal had two of Adairsville’s five hits. Sadye Johnson, Megan Gregory and Olivia Talarico had the others. Alyssa Jarrett had the team’s only RBI, driving home Taylor Fortenberry on a groundout.34