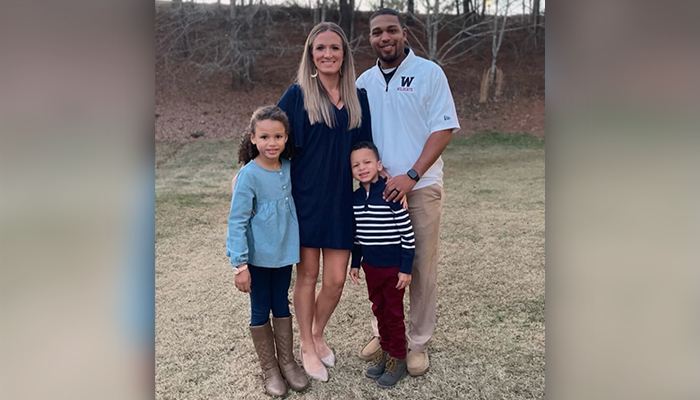 BY NICHOLAS SULLIVAN
Brandon Haywood is familiar with Woodland High.

The 2009 Rockmart graduate knows family members who attended the Bartow County school. He feels the academics at Woodland are of the highest quality, and with his help, Haywood believes the Wildcats can develop a top-notch football program, as well.

It’s the endless possibilities that drew the Cartersville resident to apply for the school’s head-coaching position that became available when Tony Plott stepped down at the end of the 2021 season.

“I respect Woodland a great deal,” Haywood said Tuesday, a day after his hire was approved by the system’s school board. “I know it kind of gets shunned in Bartow County, because you have Cartersville, Adairsville, Cass and the surrounding places. I told the boys [Tuesday], they have proven themselves in ways that we have not.

“I’m a process guy. I like going through the process of things, starting from scratch and getting my hands dirty. There wasn’t a better opportunity to get my hands dirty than going into Woodland.”

Despite the success of the other schools in the county, all three of which reached the postseason last fall, the Woodland football program has struggled to keep pace throughout most of its 24-year history. The Wildcats have only finished .500 or better five times and have just one playoff berth to their name, with that coming back in 1999.

Given that history, it makes sense for Woodland to take a chance on a 31-year-old head coach, who has been an offensive coordinator at each of his three previous stops.

“We couldn’t be happier,” Wildcats athletic director John Howard said of Haywood’s hire. “We feel like we hit a home run. We’re looking forward to doing everything we can to support him to get Woodland football turned around. We felt like all we needed, at this point, was the right guy for the job. We feel like we got him.“

As a young coach, Haywood brings loads of enthusiasm. Howard saw that throughout the grueling interview process and into Haywood’s first meeting with his players.

“His energy and excitement were there from the first time I talked to him throughout the process,” Howard said. “When he was offered the job, he was yelling and screaming. He was pumped, and we were pumped too.

“Listening to his message to the kids [Tuesday], I was ready to run through the wall. I can only imagine what those kids were feeling listening to his speech to them. I can’t wait for some of his pregame talks and halftime speeches.”

To be clear, that spark won’t fade as Haywood gets further removed from the thrill of landing his first-ever head-coaching position. He expects to utilize that during practices and games, including chest bumping players after big moments.

“That’s something I try to pride myself on,” Haywood said. “I’m the high-energy guy. … I’m going to be about excitement.

“I still feel like I’m in the midst of the game. Even as a coach, I can still feel an element of being a player. It’s fun, to me, to be excited about what they accomplish. I think it will be fun for them to see a coach interact with them like that.”

A standout for the Yellow Jackets during his prep career, Haywood continued his playing days at Carson-Newman in Jefferson City, Tennessee. Haywood’s time with the Eagles shaped him into the person he is today. While also meeting his wife at the university, Haywood dealt with the adversity of changing positions multiple times.

He finally broke through as the starting quarterback his junior season. Over the next two years, Carson-Newman recorded a 14-9 record. Haywood’s senior campaign ended in the NCAA quarterfinals, with a loss to eventual champion Valdosta State.

Even though the private Division-II school boasts only a couple thousand students, the Eagles football program continues to churn out future Bartow coaches.

“I think he just had so much impact on us,” Haywood said, referring to the late Ken Sparks, who coached Carson-Newman from 1980-2016. “We feel like in this position and with this platform that we can impact people like he did. I didn’t go to college to be a coach. I went to college to be a doctor. That didn’t pan out the way I thought it would, trying to do pre-med classes and go to football. …

“The impact he and the rest of the coaching staff made on us pulled something out of us to make us want to do the same thing that they did.”

Haywood’s ambition to follow coach Sparks’ example has proven to be evident during his relatively short time as an assistant coach — which started at River Ridge in Cherokee County, where he coached defensive backs before moving over to the other side of the ball and eventually becoming offensive coordinator.

According to Howard, Haywood received ringing endorsements from his former bosses.

“He had a level of enthusiasm and commitment to developing players who excel on the field and off the field and will be positive citizens and role models in our community,” Howard said of Haywood. “It goes hand in hand with our vision and mission for the school. … It just seemed to be a great fit for us.

“Everywhere he’s been, he’s made a difference — whether it was as a student, a football player, a specialist or a coordinator. He’s been on multiple staffs. It was just overwhelming the support from previous coaches when we called to do reference checks.”

One of those calls went to former Cass head coach Bobby Hughes, who is now the Colonels athletic coordinator. Following his four-year stint at River Ridge, Haywood took the OC position at Cass in 2018.

“Coach Hughes had nothing but positive things to say about coach Haywood,” Howard said. “He wished he could have been a part of his staff longer than he was.”

Unfortunately, a tragic event led to Haywood leaving the Colonels after one season.

In Jan. 2019, Haywood’s first cousin, Dadrian Cummings, was killed in a quadruple murder in Rockmart. It caused Haywood’s priorities to shift and his motivation to change.

“I had no intentions of leaving Cass,” he said in discussing Cummings’ death. “I had planned on staying there for a while. I made that move, because my son was just born. I was trying to get closer to home and spend more time with them.

“Something just told me to go home. … I didn’t even care about football at that time. I just wanted to be home in some capacity to be around my family.”

Eventually, Haywood did speak with the head coach at his alma mater, Biff Parson. He added Haywood to his staff — where he spent three seasons, including the past two as co-offensive coordinator. Parson also helped Haywood get a job as a P.E. teacher at Van Wert Elementary, where Cummings’ two kids attended school.

The opportunity to teach the kids and be a male role model for them made up for the exhausting nature of being an elementary P.E. teacher. It also made leaving to take the Woodland job an emotional time.

“My hardest thing was last week, telling them I wouldn’t be with them anymore,” Haywood said, referring to his students. “It was tough. I went to school with most of their parents. It’s a family for me. My mom and most of my relatives still live in Rockmart.

“It is bittersweet to step into this new phase of my life. To leave where it started and where I wanted to go, I hope I made a difference in my three years there. Everybody is supportive and understanding about this opportunity and that I would not pass it up.”

Howard is certainly glad that Haywood accepted the position. Although, he felt the candidate pool included several viable options.

“I was sad that Tony decided to resign, but I was excited about the opportunity [to make a new hire],” Howard said. “Sometimes change is good.

The influx of athletic improvements across the county likely didn’t hurt. In the past few years, Woodland, along with Adairsville and Cass, received new turf football fields, new scoreboards and updated weight rooms, as well as the addition of the athletic coordinator and strength and conditioning coach positions.

“Dr. [Phillip] Page and the school board have been incredible these past few years, sharing their vision of success and what it takes to be successful — not only in the classroom but also in athletics,” Howard said. “They wanted to be successful in both areas and understood that the facilities in Bartow County schools needed some improvements.”

Between the facility upgrades, the success of other athletic programs at Woodland and the caliber of football being played in the county, Haywood believes the pieces are in place to get the Wildcats on the right track.

He admits it won’t be easy. If anything, Haywood seems to prefer it that way.

“I know the potential and the talent here,” he said. “Any school that you get into, any program that you start or any program that you take over, you have a chance to succeed. It’s just going to come down to player buy in and what that team is willing to invest to be successful.

“When this opportunity presented itself, there was no hesitation on me jumping on it. It’s one of those challenging roles where I feel like I can jump in there, with the help of my football staff, the community and everybody involved in it. We can turn it around. It’s a challenge I was willing to take.”