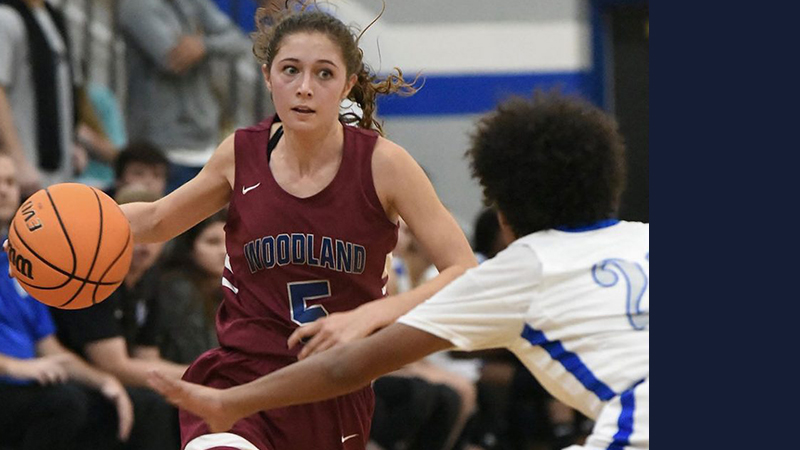 Woodland’s Carli Clymer dribbles the ball up the court during Tuesday’s win over Paulding County at Woodland High. Clymer finished with 11 points.

The Woodland High girls basketball team has been playing much closer games lately after starting the season with several lopsided losses.

However, despite the improved play, the Wildcats hadn’t been able to turn those closer games into wins until Tuesday night, when they beat Paulding County at home by a final score of 53-35.

In Woodland’s highest scoring game of the season so far, the team got out to a 15-10 lead in the first quarter with five players scoring at least one field goal in the period.

Woodland’s Jordan Thompson then scored eight points in the second quarter as the Wildcats extended their lead to 32-21 at halftime.

From there, Woodland’s defense took over, allowing just six points in the third quarter and eight in the fourth to pick up the win.

Woodland came into the game at 1-8 in Region 7-AAAAA, while Paulding was 0-11. Although, even playing a team that has struggled more than Woodland this year, the Wildcats only won by a score of 36-32 in the two teams’ previous matchup on Dec. 10. Before Tuesday’s game, Woodland’s previous highest point total was 42 and the team’s highest margin of victory was 14 in a game on Dec. 28 against Walker.

Gracie Styles was a big reason for the win with her 15 points, as was Carli Clymer with 11 points and Thompson with 10.

Woodland will look to continue its improved play Friday at home against Kell.