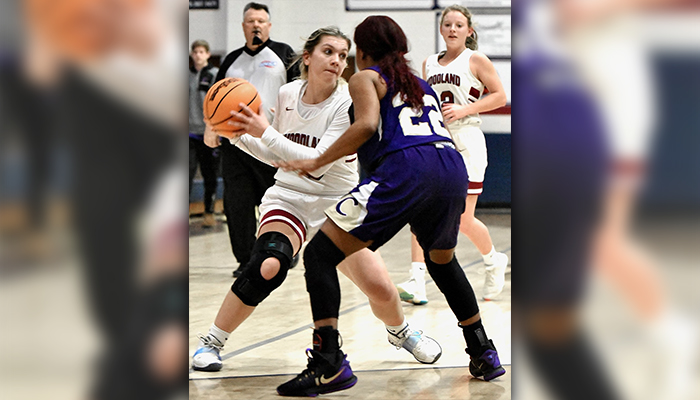 The Woodland crowd erupted in cheers when Ansley Evans buried a 3-point shot with 30 seconds to go in regulation of a tie game against rival Cartersville Tuesday at home.

There was just one problem: Wildcats head coach Kyle Morgan had called timeout just before Evans became wide open at the top of the key, caught the pass and hit nothing but net.

Thus, Morgan found himself more relieved than anything after his team managed to earn a 56-48 overtime win in the Region 7-AAAAA matchup.

“They won despite the coaching, for sure,” he joked. “I told the kids, I appreciate them picking me up for that one. It was a terrible timeout, considering the shot went in.”

Woodland (2-10, 1-1) not only overcame Morgan’s ill-timed timeout but also a double-digit halftime deficit.

“They were able to force some turnovers, get out in transition a little bit and we made some shots,” Morgan said of the second-half rally. “I thought we left some buckets out there in the first half that I thought we should have made.

“All the credit goes to the kids for persevering. They could have went in the hole early, but at the start of the second half, we got back in the game. I was real proud of them.”

Cartersville (3-8, 0-3) held a 31-19 advantage at halftime and started the third quarter with a quick bucket to extend the lead to 14. Woodland climbed back into the game behind a pair of treys from Abigail Taylor and one from Reagan Weightman.

However, once the Wildcats got within 33-32, the game stagnated. A late Canes basket provided the lone points from the final few minutes of the third quarter.

After struggling with Woodland’s press during the third quarter, Cartersville seemed to regain its composure early in the fourth. Early in the final period, the Canes pulled out to a 42-34 lead.

Taylor, though, took over from there.

Playing in just her third game since returning from a knee injury suffered in a season-opening tournament, the junior racked up 10 of her team’s 12 points in the fourth quarter. Her jumper with 1 minute, 15 seconds to go knotted the score at 44-44, giving the game its first tie since it was 10-all late in the first quarter.

“Abigail Taylor hit some big shots for us,” Morgan said of his leading scorer, who had 22 points.

Despite Taylor’s clutch shooting, Cartersville still had the best chance to win the game late in regulation.

Following a turnover by the Wildcats, the Canes missed a layup — albeit a contested one — in the closing moments. Cartersville still had the ball out of bounds underneath their own basket with 4.1 seconds left, but the Canes turned it over as the buzzer sounded.

“We’re struggling to find someone who wants to handle the ball under pressure,” Cartersville head coach Cindy Moore said. “I’ve known that since November that we’re trying to fill that void of a true ball handler. We’re playing three or four people a night at point. When we get pressure, it starts to affect us. We turned the ball over too much. But I give the credit to Woodland. Great second half for them.

“Even though I thought we didn’t have a great second half, we still had a chance. Missed an easy basket, and then had the ball underneath on the inbounds. We couldn’t get a shot off and turned it over.”

It took until overtime, but the Wildcats finally took their first lead of the game. And when Jordan Thompson stepped to the foul line to shoot a 1-and-1, Woodland led 50-46 inside the final 30 seconds of the extra session.

Although Thompson missed the freebie, it turned out to be the play that helped seal the victory. She got her own rebound — in between four Cartersville players — and got fouled again.

The senior hit the second of those two foul shots. She then stole the inbounds pass and scored an and-1 layup, adding two more free throws in the waning seconds.

In total, Thompson contributed six of her 13 points in the final 20-plus seconds.

“She’s our senior leader, and she stepped up towards the end,” Morgan said. “She closed it off, hitting those free throws, making that steal and bucket, and then getting the rebound on the miss. All of those were just huge winning plays.

“Her being able to do that kind of ensured we would be able to walk out of here with a win.”

Both coaches acknowledged that Tuesday’s game was impacted by the Canes missing a few key players through COVID-19 protocols. On the plus side, Cartersville got some other players valuable experience, and even more importantly, those out for quarantine should return for Friday’s home game versus Calhoun.

Jamiya Moore led the Canes with 14 points. She hit a trio fo early 3s, including one to give her team a 13-10 lead at the end of the first quarter and another to kick off Cartersville’s dominant second period. Ansley Griffin added 11 points.

“Obviously, we’re missing three, four players to quarantine,” coach Moore said. “We get those back [Wednesday], and we’ll work to get ready for the next one.”

Given that caveat, Woodland — which faces Hiram in its next contest Friday on the road — knows that it will likely need to turn things up a notch if the Wildcats are going to beat the Canes in February’s rematch at The Storm Center.

“From a competitive standpoint, generally, every time we play it’s pretty close one way or another,” Morgan said. “Coach Moore does a great job with her kids. I know they were shorthanded tonight. Those kids she had out there played their guts out, made some big shots and they competed.

“I have a feeling that when we go to their place, it will be a knock down, drag out. Hopefully, we can come out on top, but we’ll probably have to play a little bit better than we did tonight, playing throughout the entire game versus playing in spurts.”