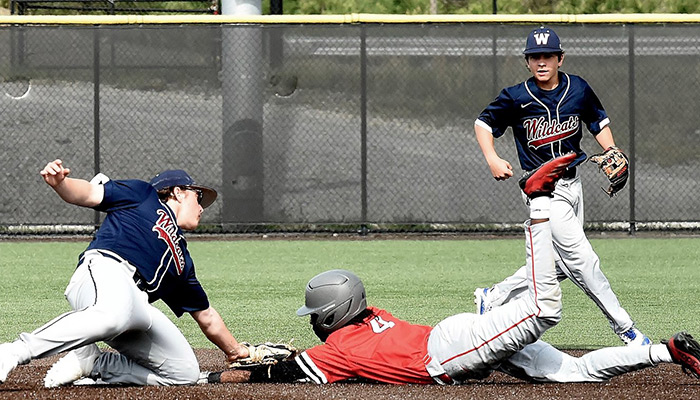 BY NICHOLAS SULLIVAN
A furious rally by Woodland came up just short in a 9-8 loss to Cedartown in the Battle for Bartow Friday at LakePoint. But it served as only the second-most gut-wrenching defeat of the day suffered by the Wildcats.

In Friday’s finale, Woodland came out on the wrong side of a 5-3 game in eight innings against Landmark Christian.

“There’s nothing that we’re going to say, that anybody can say to make you feel better,” Wildcats head coach Matt Montgomery said of his postgame speech, following the nightcap. “You can’t leave any doubt about anything. … You can’t let the last one affect the next one.”

The final score doesn’t offer much insight into just how heartbreaking the second loss proved to be.

Trailing 3-2 in the bottom of the seventh, Jacob Gravett came to the plate with runners on the corners. The junior hit a sinking liner to left field that the Landmark outfielder dove for and missed, allowing the ball to reach the fence.

Chase Carson, who kicked off the two-out rally with a triple, scored easily. With the runner from first base rounding third well before the ball made it back into the infield, the Wildcats looked set for a thrilling walk-off win. Woodland even celebrated down the left-field line.

Unfortunately for the Wildcats, the War Eagles successfully appealed that the second runner — who represented the winning run — missed home plate. The call sent the game to extras, where Woodland struggled to bounce back.

Landmark, based out of Fairburn, drew a pair of walks, executed a double steal and added a two-run double to pick up the victory.

To be fair, that’s sort of what the Wildcats did after coming up just short in Friday’s earlier game against the Bulldogs.

In the Cedartown game, Woodland (8-17) looked as though it might get run-ruled through the early innings. The Bulldogs saw the Wildcats answer their three-run top of the first with two of their own in the home half.

Cedartown, though, took control by putting up two more three-spots in the fourth and fifth innings. But a huge six-run outburst in the bottom of the fifth — all of which came after the first two batters were retired — pulled Woodland within a run.

The Wildcats put the first two batters on base in the sixth, but a strikeout and a double play ended the threat. An unsuccessful sacrifice bunt in the seventh inning snuffed out the Wildcats’ final hope.

“We put ourselves in a bad spot against Cedartown,” Montgomery said. “We came back and had chances. We capitalized on more chances but just didn’t do it enough.”

As Woodland prepares for its final Region 7-AAAAA series against Calhoun next week, Montgomery takes solace in knowing his team showed plenty of fight Friday.

“We’re headed in the right direction,” he said. “Before, I think it would have been easy to fold the tent in that situation, and we didn’t.”