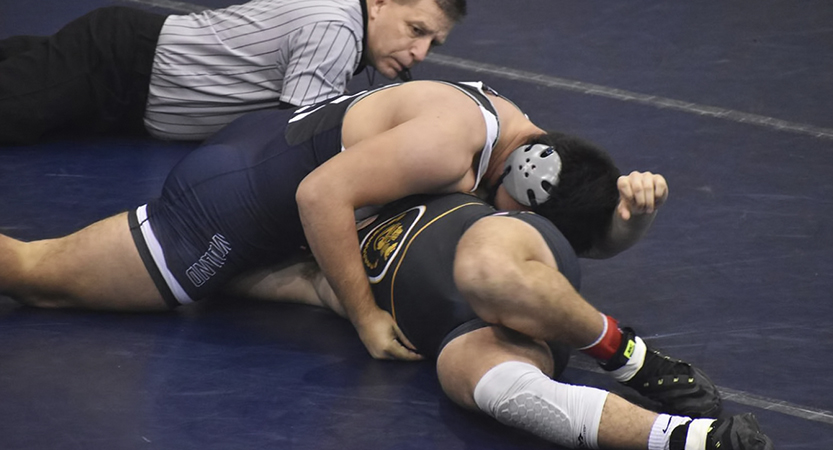 The 2018-19 Woodland wrestling team ended a state title drought with a win in the Class 5A duals championship, cementing its place among the best groups in the history of the storied program.

It’s possible this season’s team is even better. At least that’s the perception after the Wildcats absolutely mauled every team in their path en route to a second consecutive Region 7-AAAAA duals title Saturday at Paulding County.

Woodland expectedly cruised into the finals, blowing by East Paulding (82-0) and Kell (62-15). But the Wildcats saved their most impressive performance for the finals, where they obliterated Carrollton with 13 first-period pins in 14 matches of a 78-3 romp.

“We did as good as we could have done,” Woodland head coach Adrian Tramutola said. “We won three matches in a row. Looked like we were just going through the motions there in the first couple of rounds. In the finals, we wrestled about as good as I’ve seen us.”

It was a true masterclass. Demarcus Williams set the tone, pinning his opponent in the opening match at 195 pounds. Carrollton’s wrestler had just beaten Cass’ Noah Hoffmeier, who won the traditional state title last season, but he proved to be no match for Williams.

“It started off with Demarcus Williams going out and pinning the kid from Carrollton, who had just knocked off the defending state champ from Cass the round before us,” Tramutola said. “We thought it was going to be a good match, and it wasn’t even close. He took him down twice, put him to his back and pinned him.

“That sparked us, and we just snowballed them.”

That’s quite the understatement.

“Coming off winning a state championship and having the majority of our team back, we knew going into it would be a good year for us,” Tramutola said. “We face our toughest opponent every day, and it’s ourselves. If we can stay healthy and continue to do the right things, … we’re a really, really solid team. When we get on a roll like that, we’re hard to beat.”

The only thing that kept the finals from being a shutout was the combination of an illness and a state finalist. Colton Bishop was unavailable for Saturday’s competition due being under the weather. His replacement, Randy Buchanan stepped in and fought valiantly before falling to last year’s state runner-up.

“He’s sick, and he’ll be back next weekend,” Tramutola said of Bishop. “But there’s a kind of a mentality we’ve had all year. Everybody is going to go through injuries and sickness, the next guy up goes out there and does the job.”

There’s no discernible holes to poke in Woodland’s dominant showing. And while Tramutola was pleased with the display, the Wildcats have much bigger goals in mind than a region championship.

“It was a good day, but we stay even-keeled, because all we’ve done is qualify,” he said. “Everybody says it’s the first couple of rounds of the state tournament, which it is, but now, the real wrestling begins.”

At this point, it would be a shock if Woodland isn’t the top seed when the 5A bracket is announced in the coming days. The Wildcats check off every box, emphatically, but Tramutola knows whether his team is ranked first or not has no bearing on their odds of repeating.

“All the criteria falls in our favor,” he said. “We’re the defending champs. We haven’t lost to anybody. We’re ranked No. 1.

“At the end of the day, none of that matters. Seeds are made by people who don’t compete and don’t wrestle in an air-conditioned room or online. … Seeds go out the door when tournaments start.”

In this situation, the only thing seeding determines is when you wrestle your first match. The top half of the 5A bracket wrestles at 9 a.m. Thursday compared to the bottom half, which starts at 11:15.

Regardless of what time Woodland wrestles, the only thing standing between the Wildcats and the program’s fourth duals title (sixth overall) is four matches next week in Macon.

Everyone expects Woodland to win it all. That doesn’t mean the Wildcats feel any pressure.

“It’s all imaginary,” Tramutola said. “It’s not real. It’s made up. You can’t find it anywhere. I think we do a good job as a team of taking that supposed pressure and putting it on our opponents. …

“If we go out and do what we’ve done every single tournament, practice and keep our routine the same, then nothing else should matter. Nothing changes anyway. It’s still a wrestling mat, just a different location. You versus another guy.”