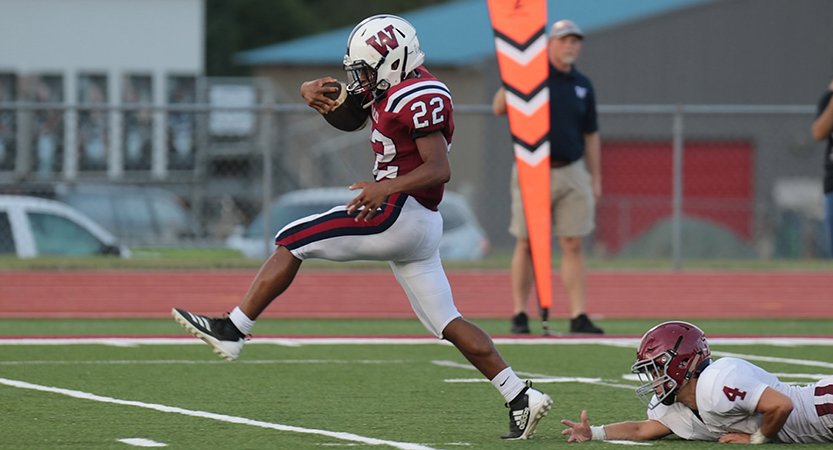 The J.T. era has officially started at Woodland High.

The Wildcats’ junior quarterback, Johnathan Thomas certainly had an impressive showing in Woodland’s dominant 35-7 win over Southeast Whitfield Friday night, concluding the game with approximately 121 rushing yards on 13 carries — and with them, three touchdowns on the ground.

“He’s a kid we had all the faith in the world in,” Woodland head coach Tony Plott said. “He comes in every day, he works hard, he’s a leader in the weight room, he’s a leader at practice. He’s a great athlete, and I think everybody got to see that a little bit tonight.”

Passes from Thomas, however, were few and far between. In the unofficial stats department, he wrapped up the game with just one completion that wasn’t negated by penalties, two incompletions and one interception.

Aiding the Wildcats’ more-than-successful rushing attack was sophomore Asa James — who unofficially finished the game with 53 yards on eight carries, including a 20-yard touchdown run on his first handoff — and senior Demarcus Williams, who unofficially wrapped up the contest with 161 yards on 17 carries, which included a thundering 30-yard touchdown run in the second half.

“As a unit, I think they played well,” Plott said of his team’s defense. “We know how good our front four can be with those guys up there. I think Bryce Shedd played great, he was all over the field and made some big plays for us. And Blake Cash, of course, at the outside linebacker, and Tommy Good and Eli Jernigan, who worked out some of the other outside linebackers and played really well for us.”

With just six seniors on the roster, Plott has plenty of young talent to work with. He said he especially sees potential in the team’s emerging offensive line.

“That’s been a work in progress for us all year long,” he said. “I think they’re going to get better, we know how talented a group they are, they’re just young — we have, like, one junior and I think the rest of them are all sophomores … they understand that they need to grow, and they’re working at it. They’re doing everything that we ask them to do.”

Woodland struck first halfway through the first quarter, with James barreling his way into the Raiders’ end zone on a 20-yard run. Thomas notched up his first score of the game roughly four minutes into the second quarter, with Williams running in a 2-point conversion to make it 15-0 Wildcats.

Southeast Whitfield’s only points came in the form of a 10-yard touchdown pass around the midway point of the second quarter. On the ensuing punt, James broke off a thundering 50-yard return — only  for the humongous gain to be wiped out on a Woodland penalty.

That possession ended with Williams blazing down field for a 30 yard touchdown run. With the extra point attempt no good, Woodland’s lead increased to 21-7.

Thomas notched up his second rushing score of the game with less than 90 seconds remaining in the first half. Cash made good on the two-point conversion, making it 29-7 Wildcats heading into halftime.

The third quarter was largely a comedy of errors for the Raiders, as Southeast Whitfield made it all the way down to the Woodland 7 for a first and goal — only for a seemingly never-ending parade of penalties pushing the team all the way back to the Woodland 38. Back-to-back penalties on the Wildcats, however, would allow the Raiders to reclaim almost all of the lost yardage — only for Sowder to throw a costly interception with his team at the Wildcats’ 8.

Thomas’ third rushing touchdown of the game came around the midway mark of the fourth quarter —  a blistering 39-yard run on a fourth and five, no less. After the Raiders went four-and-out on the next possession, Woodland played it safe and effectively controlled the clock with efficient runs right up the gut. At one point, Jernigan appeared to extend the Wildcats’ lead with a 25-yard touchdown run, only for the score to be negated by an offensive holding call.

Woodland assumed the victory formation with less than a minute remaining, although at the Raiders’ 20, the team certainly had a few more opportunities to extend its already sizable 35-7 lead.

“We worked all week on correcting mistakes from the Adairsville game, and I think our kids responded to it,” Plott summed up the Wildcats’ win. “And they came out and played real hard tonight.”

The Wildcats’ first road test of the season is slated for Sept. 6, as Woodland travels to East Hall — a team that was pummeled 50-0 by Flowery Branch in the Gainesville school’s season opener.