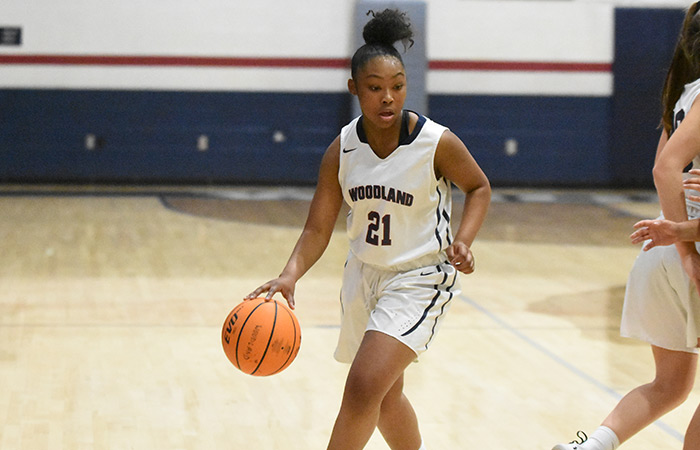 BY NICHOLAS SULLIVAN
Abigail Taylor isn’t likely to lose her title of Woodland’s best scoring option this season, and the Wildcats will certainly be glad to see her return to the court soon.

The senior missed Tuesday’s home game against Gordon Central, and without Taylor leading the offense, Woodland fell by a 28-16 final score.

“She’s our best player,” Wildcats head coach Kyle Morgan said of Taylor. “Hopefully, she’ll be available long term and the rest of the week. But she wasn’t here tonight, and we tried to focus on the kids who were here.

Gordon Central led 9-6 after one period. But the teams actually entered halftime knotted at 13-apiece, as Woodland (0-4) ended the second quarter on a 5-0 run.

“We were moving the ball, sharing the ball and getting good shots,” Morgan said of the opening half. “We made some shots, but there were still some lapses defensively, too many offensive rebounds and some silly fouls — little things that make a difference, especially in a close game.”

Despite struggling to score themselves, the Warriors held a big edge in the second half. Gordon Central scored all seven of the game’s third-quarter points and held Woodland scoreless until the 2:49 mark of the fourth quarter.

“We played together,” Morgan said. “We just missed a ton of shots. It’s very difficult to win if you can’t score. But I will give my girls credit. They held the other team to 28, and if you hold a team to 28, you should win. …

“I do appreciate the effort they gave, especially when they weren’t scoring. It’s very easy [in that situation] to get down and not play defense, but they seemed to keep their energy.”