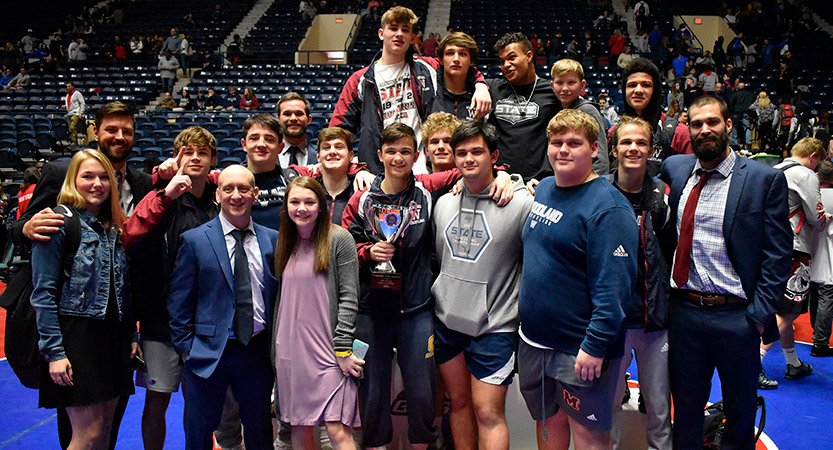 The Woodland wrestling team was the only program regardless of classification to accumulate more than 200 points in the GHSA traditional state championships this weekend in Macon.

It’s a somewhat arbitrary standard, but suffice it to say, the Wildcats were the best team in Georgia all season. It made winning their second straight Class 5A team title and fourth total championship, thanks to a pair of duals crowns, over the past two years practically a foregone conclusion.

But given that he suffered through a long stretch of second-place finishes at state, Woodland head coach Adrian Tramutola still cherishes every championship and what it means from a collective aspect.

“Everything factors into it,” he said. “… The trophy doesn’t say the kids who place, it says, ‘Woodland team champions.’

“We had to go through a long, hard time of taking second, so it makes these even sweeter.”

“Obviously, you’re happy for everyone who won, and you feel for the guys who lost,” Tramutola said. “Overall, we had some unbelievable performances this weekend. We came in without Demarcus Williams, who we believe could have won [his division]. We had some really good rounds. … We had some great performances.

“The leaders of our team all year long, you know they’re going to do their thing. Sometimes, it’s just expected, but the fact that they come in every day and do it is incredible.”

McCrary, Smith and Henson were at the forefront of that group. Each essentially cruised into their respective finals, but Saturday offered up three wildly varying results for those Wildcats.

In claiming a third state title in as many seasons, McCrary earned a 9-5 win over Ola’s Sam Harris in the 138-pound finals.

The junior finished the season at 46-1 and is now 145-1 in his career with the only defeat coming to a wrestler in Florida. McCrary said the loss only helped motivate him.

“Being the undefeated kid and having people put me on that pedestal, it was nerve-wracking at times,” he said. “That loss, I’m not saying it was a good thing, but it helped me refocus and get back to where I was freshman year and sophomore year. It really pushed me.”

In the very next match, Henson rallied back to win at 145 pounds. He trailed Francis Morrissey of Veterans 3-0 through much of the match before fighting back to even the score late in the third period.

“That’s kind of my style, that’s how I’ve won a lot of my big matches over the years,” Henson said. “We knew going into it that it would be a battle from the start and whoever was more offensive in the third period was going to win.”

It only took Henson 27 seconds into the first overtime period to pin Harris for the victory.

“Speechless,” Henson said of his reaction. “Knowing that all my fans, my family, my friends and my coaches were cheering for me. You just can’t explain it.”

The moment meant even more to Henson after the sophomore came agonizingly close to winning a state title last year. As a freshman, Henson entered the finals unbeaten before suffering a shocking loss. This time around, he finished off a perfect season.

“It motivated me throughout the summer and throughout this year,” Henson said of his only high school defeat. “I haven’t stopped thinking about it. In the end, it’s just a wrestling match. It’s not your life. You learn from it, and you try to get better, which I did with help from my coaches.”

Tramutola said he knew Henson was sure to win after forcing overtime. But the coach was still incredibly impressed with the poise Henson showed when it appeared a repeat of last season might be in the cards.

“You can’t help but have that creep in your mind,” Tramutola said. “Here we are undefeated, ranked sixth-ranked in the country, beat a bunch of kids, beat this kid already and now down 3-0.

“But to see him come back and beat that kid? I was pumped.”

Someone who wasn’t that enthused after his match was Smith. Maybe, it’s just his demeanor. Maybe it’s the fact that some kids would rather wrestle up a weight class than face him. Or maybe, he just has higher aspirations than winning high school state titles.

“At this point, I have bigger goals, bigger dreams,” Smith said. “Coming up this summer, it’s to win a national title. That’s what I’m aspiring to do.”

Well, Saturday, he still managed to put together one of the more impressive non-pin victories of the day. Smith put on a masterclass performance in his 20-6 win over Union Grove’s Alexander Troy.

“He feels cheated when he wrestles, because you can see the [other] guy doesn’t want to wrestle,” Tramutola said. “They want to just keep it close. …

“You never have to worry about where he is at any position on the mat, because he’s so cerebral when he wrestles. It’s cliche, but he’s like two steps ahead of everybody he wrestles, it seems like.”

Perhaps, that’s why Smith seemed so calm after repeating as state champion, he was already thinking about returning as a senior to win another.

“At the end of the year, we celebrate for a few days, maybe a week or two, but right after that, we’re training for next year and the times after that,” Smith said. “You can only cherish those memories for so long. You have to look to make new ones.”

While Woodland will celebrate its three winners, the Wildcats will also console those who came up short Saturday.

Jones had a tough matchup with Veterans’ Julian Farber at 132 pounds, and Cochran got going a bit too late in his 160-pound battle with Buford’s Charlie Darracott, falling by two points. Bishop put up an incredibly gutsy showing before being pinned with nine seconds to go by Carrollton’s Brent Parivechio in the 126-pound finals.

“What nobody knows is that Colton Bishop has a torn MCL,” Tramutola said. “He tore it on Tuesday. Instead of not wrestling, he sucks it up and makes the state finals. He was a takedown away from winning it.”

Overall, all 10 Woodland wrestlers who competed in Macon went home as a state-placer. Outside of the six finalists, Easton Bishop was third at 120 pounds; Larry Collum and Bryce Shedd placed fourth at 150 and 220, respectively; and Beau Jernigan — who also has a torn MCL, per Tramutola — finished sixth at 285.

“We’re going to take a lot of good from this weekend,” Tramutola said, noting that Jones and Collum were the only seniors to compete. “Even the losses, I think we can take something good from them.”

If this season’s performance is any indication, those defeats are bad news for anybody looking to unseat Woodland as the top wrestling force in the state. The worst thing to give a team already on top is motivation.

The Wildcats have showed the past two seasons how dangerous they can be when they have something to prove.

“Last year, we were fighting to get up there, and it felt so good,” McCrary said of winning the team championship. “This year, we were defending our possession and defending what we think is ours.

“I think we earned our place in history this year.”